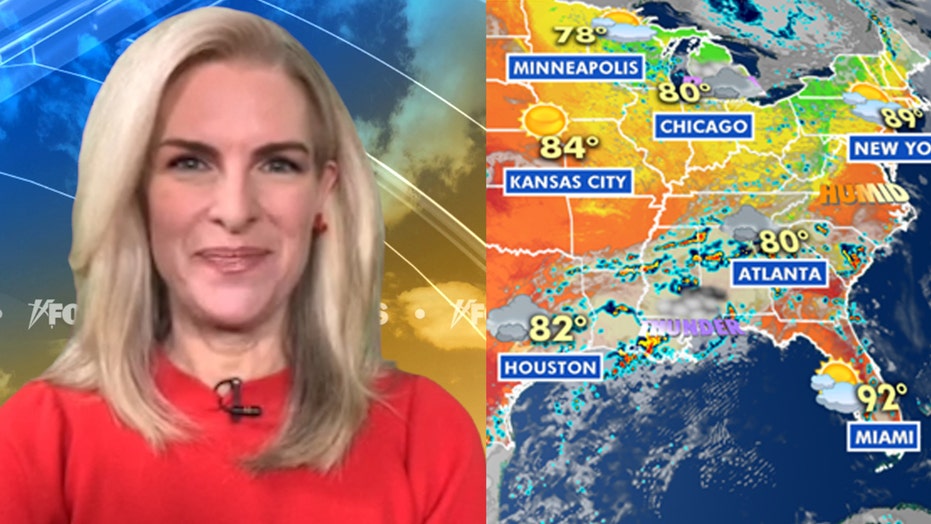 A large cloud of Saharan dust that's blanketed the Caribbean is about to reach the U.S. and drenching storms may bring more rain Wednesday to the Gulf Coast.

The Saharan Air Layer has been incredibly impressive this year. The dry airmass, known as SAL, branched out across the Caribbean into the Bahamas and will eventually drift over Florida and the Gulf Coast in the next few days.

What to know about the Saharan Air Layer. (Fox News)

The airmass mostly travels above the ocean surface at 5,000 to 20,000 feet. It causes sinking air and shear, which inhibits tropical activity over the Atlantic Ocean.

The airmass will move into the South and Gulf Coast by the weekend. (Fox News)

This dust can travel 5,000 miles before reaching the Gulf of Mexico and the U.S.

Dolly weakens to a tropical depression

The fourth named tropical storm of the season, Dolly, is now a depression.

Dolly has weakened to a tropical depression as of Wednesday morning. (Fox News)

The National Hurricane Center (NHC) said the storm was about 450 miles southwest of Newfoundland Wednesday morning, with maximum sustained winds of 35 mph as it moves to the northeast at 12 mph.

It’s the third earliest formation of the fourth named storm during the Atlantic hurricane season, and will continue to weaken and not affect land.

Drenching storms as possible on Wednesday along the Gulf Coast. (Fox News)

A stalled front will bring the risk of showers and thunderstorms stretching from the Southern Plains back into the Tennessee Valley and the Mid Atlantic.

Some areas could get pockets of heavy rainfall and flash flooding, especially along the Gulf Coast in Texas and Louisiana, according to the National Weather Service's Weather Prediction Center (WPC).

The Storm Prediction Center (SPC) said there's a risk of severe thunderstorms across the Northern Plains on Thursday.

Several inches of rain may fall from storms along the Gulf Coast. (Fox News)

Unsettled weather moves into the Northwest and Northern Plains from Thursday through Friday.

Hot temperatures out West hang on for Wednesday.

Dangerous heat continues across the West on Wednesday, with heat advisories stretching through California into Oregon. (Fox News)

Record highs will be possible for parts of Northern California through Friday.

Afternoon highs in the 90s and 100s continue through Saturday from the Central Valley and Northern California into southwestern Oregon.

Heat advisories are up over Oregon and into the Central Valley of California through Saturday.

Excessive heat warnings are also in effect for the Grand Canyon.