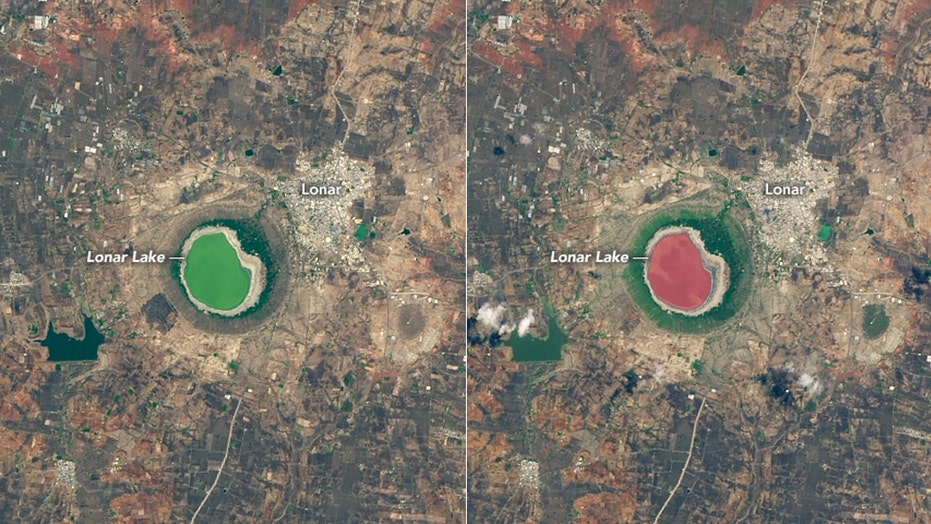 A crater lake in India that formed when a meteorite slammed into Earth mysteriously changed colors earlier this month, spurring an investigation by local officials.

Lonar Lake, located in India's west-central state of Maharashtra, went from a green tint to pink over a few days.

MILKY WAY GALAXY COULD HAVE 'OCEAN WORLDS' ALL OVER, NASA SAYS

Satellite photos from NASA show the lake on May 25 still sporting its green hue before a second image from June 10 shows the changeover.

Lonar Lake’s color shift occurred over the span of a few days.

The crater in India was initially thought to have a volcanic origin due to being located in volcanic basalt but scientists in the 1970s found that maskelynite, a naturally-occurring glass, was present. Maskelynite only formed from "extremely high-velocity impacts" such as a meteorite strike.

"Formed 35,000 to 50,000 years ago, Lonar is the only 'fresh' impact structure in basalt on Earth, making it an important analog for impact craters on the surface of the Moon," NASA notes.

In this NASA photo from May 25, 2020, Lonar Lake can be seen with a green color at the surface. (NASA/Lansat)

In a video posted on state-run Maharashtra Tourism's Twitter, local geologist Gajanan Kharat said the lake has changed colors before, but nothing like what has recently unfolded.

"Salinity in the lake has increased as water level has gone down drastically this year and it has become warmer too resulting in overgrowth of algae," Kharat said.

In the wake of the abrupt change, officials from the state forest department have collected water samples to determine the exact cause of the color change.

The Hindustan Times reported on Tuesday that the Bombay high court also ordered that environmental experts submit a report in four weeks on findings from the lake's glassy surface and water samples from a nearby dam.

Some have speculated that India's lockdown due to coronavirus that led to reduced pollution may have had an impact on the lake, but Madan Suryavashi, head of the geography department at Maharashtra's Babasaheb Ambedkar University, told Agence France-Presse that's probably not the case.

"There wasn't much human activity due to lockdown which could also have accelerated the change," he told the news agency.

A similar spectacle is also present in Australia, where Lake Hillier gets its shade of pink from Halobacteriaceae, a pink-colored microorganism that thrives in water with high salinity.

But NASA notes that the pink waters in Australia are always that way and don't change in a matter of days.

"One explanation for the rapid change in India’s Lonar Lake could be a rapid rise in salinity as evaporation during warm, dry weather in the area has caused water levels to drop," NASA notes.