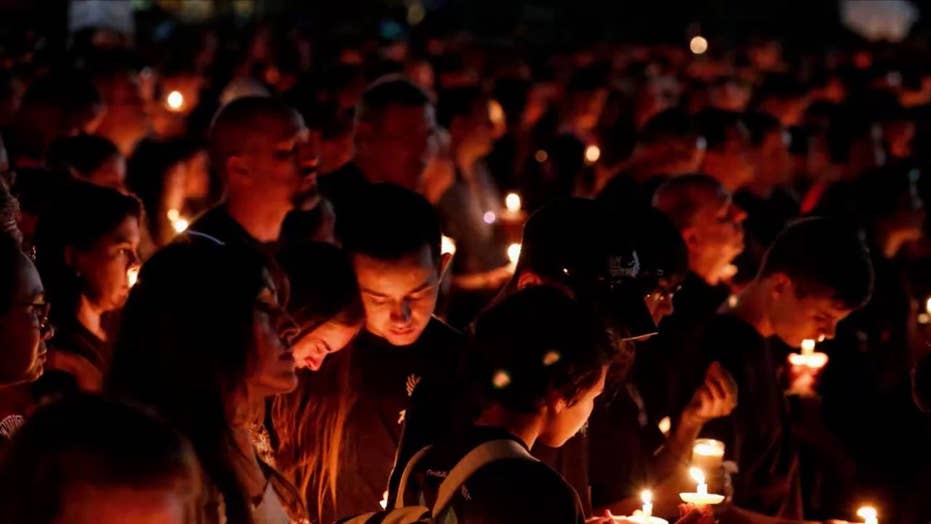 Schools shootings: A look at the most recent events

From coast to coast school shootings have had a devastating impact on Americans. Here’s a look at some of the most recent events that shook the nation.

During the last year, multiple schools across the U.S. have been impacted by shootings, which have resulted in the deaths of both students and faculty members.

Read on for a look at school shootings that have taken place within the last year.

A male student fired shots at Noblesville West Middle School in Indiana on May 25, critically injuring another student and a teacher at the school.

The alleged shooter, who has not yet been identified, was taken into custody shortly after the incident occurred at roughly 9 a.m.

Sources told FOX 59 the suspect walked into a science classroom with a gun and opened fire, hitting a female. A science teacher was able to tackle the student who fired shots inside the classroom, student Ethan Stonebraker told The Associated Press.

The victims were taken to a local hospital. The extent of their injuries is unclear.

At least eight people were killed and several others were injured following reports of an active shooter at a Texas high school on May 18, local affiliate KTRK reported. The suspected shooter was taken into custody.

Police officers responded to Santa Fe High School around 8 a.m. CDT after reports that a shooter opened fire inside a first-period art class. Details of the incident were not immediately available.

"Details will be released as we receive updated information. Law enforcement will continue to secure the building and initiate all emergency management protocols to release and move students to another location," the school district said in a statement.

A 14-year-old student was taken into custody after allegedly shooting a classmate at Highland High School in Palmdale, California on May 11.

The suspected gunman shot a fellow student in the arm, police said. The shooting stemmed from a dispute between the shooter and the victim, according to authorities.

The injured student is expected to make a full recovery.

A suspected gunman, later identified as 19-year-old Sky Bouche, allegedly opened fire at Forest High School in Ocala, Florida, on April 20. The shooting occured on the 19th anniversary of the Columbine school shooting.

At least one student was injured after the gunman shot through a classroom door, hitting a 17-year-old student in the ankle, authorities said. The student was later taken to a local hospital with a non-life-threatening injury.

A school resource officer, James Long, was hailed a hero after arresting Bouche just three minutes after he opened fire.

Bouche, a former student at the school, allegedly carried the weapon in a guitar case inside the school, authorities said.

Investigators believe the shooting was not random as the gunman and Willey had recently ended their relationship.

Rollins was fatally wounded during a confrontation with Deputy Blaine Gaskill, an armed school resource officer who doubles as a SWAT team member.

Gaskill was praised because he reportedly contained the situation in under a minute, Cameron said.

Willey's parents announced on March 22 that their daughter was brain dead and that they would be taking her off of life support. She died later that night.

Jaelynn's mother, Melissa, told reporters her daughter had "no life left in her."

"On Tuesday ... our lives changed completely and totally forever. My daughter was hurt by a boy who shot her in the head and took everything from our lives," she said.

A 14-year-old boy, later identified as Desmond Barnes, was also injured in the shooting. Authorities said he was shot in the thigh but was later released from a local hospital.

Police are still investigating if the boy was shot by Rollins or Gaskill while the two exchanged gunfire.

A 17-year old girl is dead and one other person was left injured from a March 7 shooting at Huffman High School in Birmingham, Alabama.

Courtlin Arrington, 17, was killed when shots were fired in a classroom, Birmingham Police Chief Orlando Wilson told WBRC. A 17-year-old male student was wounded. He was taken to the hospital and released.

Birmingham Police Department announced March 8 that a student was taken into custody in the investigation into the deadly shooting. Police said evidence, surveillance video and statements were reviewed throughout the night.

Police initially called the shooting “accidental,” but later reviewed a video that captured the deadly incident.

Police responded to reports of shots fired at Marjory Stoneman Douglas High School in Parkland, Fla., around 3 p.m. on Feb. 14. Seventeen people lost their lives and 17 others were injured.

The day after the shooting, the suspected gunman, 19-year-old Nikolas Cruz, told authorities he arrived at the school with an AR-15 rifle, adding that he shot "students that he saw in the hallways and on school grounds," according to an arrest affidavit.

Cruz was formally charged March 7 with 17 counts each of premeditated murder and attempted murder.

A 12-year-old girl was taken into custody after police said the loaded gun she brought to Salvador B. Castro Middle School in Los Angeles accidentally discharged on Feb. 1, shooting a 15-year-old boy in the head and a 15-year-old girl in the wrist.

Police interviewed the 12-year-old student and agreed the shooting was accidental. She was booked in a juvenile detention center on suspicion of negligently discharging a firearm on school grounds.

It is unclear where the girl got the gun or why she decided to bring it to her school.

Doctors said both students who were shot are expected to recover.

Additionally, an 11-year-old boy and a 12-year-old girl were treated at the hospital and released while a 30-year-old woman, who is a school staff member, had only minor injuries, Los Angeles city police said in a statement.

A 15-year-old girl was hurt in a Jan. 22 shooting at Italy High School in Italy, Texas. A 16-year-old male student was taken into custody, Ellis County police told Fox News.

In the school's cafeteria, the suspect "engaged the victim" and fired several shots with a semi-automatic handgun, Ellis County Sheriff Chuck Edge said during a press briefing.

The suspect was confronted by an Italy Independent School District staffer in the school cafeteria and took off, Edge said. Law enforcement later apprehended the suspect on school grounds.

The suspect was charged with two counts of aggravated assault with a deadly weapon, the Ellis County district attorney's office announced.

Gunman William Atchison, 21, disguised himself as a student to get inside Aztec High School in Aztec, N.M., on Dec. 7, 2017, according to authorities. Atchison was also a former student.

Officials said Atchison eventually shot himself, adding that the students killed were not targeted, but were at the "wrong place at the wrong time."

A man in Northern California went on a random shooting rampage on Nov. 14, 2017, killing five people and wounding at least a dozen adults and children before authorities shot and killed him.

The gunman, who was later identified as Kevin Neal, 44, rammed a car into the gates of Rancho Tehama Elementary School and shot at its portable classrooms. He repeatedly tried to get into a kindergarten classroom but quick-thinking staff locked the school down, and he eventually stormed off.

Neal reportedly targeted the elementary school as part of a long-running feud with neighbors.

A male student shot and injured a fellow student at a central Illinois high school on Sept. 20, 2017. The shooting unfolded in Mattoon High School’s cafeteria around 11:30 a.m., officials said at the time.

One female teacher intervened and successfully subdued and disarmed the gunman -- a move Mattoon Police Chief Jeff Branson said at the time was “pivotal.”

The gunman was taken into custody shortly after the incident.

A 15-year-old student opened fire on fellow classmates at a Washington state high school on Sept. 13, 2017, killing one, investigators said. Caleb Sharpe, the suspected gunman, said the student who died had bullied him.

The slain student tried to stop the teen's rampage when the gun jammed, according to The Associated Press. A school janitor was hailed a hero after he was able to subdue the alleged shooter.

Three other students were wounded in the attack. According to court documents, Sharpe told officials that he brought the two guns to school to “teach everyone a lesson about what happens when you bully others.”

A special needs teacher and a child, 8, were killed in what police said was a murder-suicide at North Park Elementary School in San Bernardino, California.

Police said Cedric Anderson walked into the school on April 10, 2017, and shot his estranged wife, Karen Elaine Smith. Two other students were also struck before Anderson killed himself, although law enforcement officials said they do not believe they were intended targets.

Jonathan Martinez was identified as the 8-year-old killed at the elementary school. A 9-year-old was injured.

Two high school students were injured after a fellow student allegedly fired a shotgun inside Liberty-Salem High School in Ohio on Jan. 20, 2017.

Logan Cole, who was 16 at the time, was shot twice but survived. Another student was grazed by a bullet. Champaign County Sheriff Matthew Melvin said the gunman intended to harm more students than he did.

Ely Serna, the accused gunman, was 17 at the time of the shooting but is being tried as an adult in Champaign County court. He has pleaded not guilty by reason of insanity.