With muggings skyrocketing in New York City, victims who fight back could be exposed to legal consequences under the city’s "murky" self-defense laws, according to experts.

One recent case prompted Curtis Sliwa, a longtime public safety advocate who has led the Guardian Angels volunteer group for decades, to call on the Empire State to follow Florida's example and implement a "stand your ground" law to enhance a citizen's right to self-defense.

A would-be robber died over the weekend after demanding cash from two men and waving "an imitation firearm," according to the NYPD.

Around 2 a.m. Sunday, 33-year-old Robert Compton of Staten Island allegedly flashed what looked like a gun at two other men near the intersection of Pacific Avenue and St. Albans Place, a generally safe neighborhood across from a strip mall and next to a church.

"A preliminary investigation determined that the [robbery suspect] approached two males, both 29 years old, displayed a firearm to them and demanded money," the NYPD said in a statement. "A physical confrontation ensued, and the two males physically restrained the armed male in an attempt to gain control of the firearm. During the struggle, the armed male became unconscious."

Police said officers responding to a 911 caller’s report of an armed robbery in progress found the suspect "unconscious and unresponsive." They recovered "an imitation firearm" at the scene.

The two 29-year-olds sustained minor injuries and were treated at Staten Island University South Hospital, according to authorities.

A police spokesperson said that no charges had been filed as of Tuesday but the investigation remained ongoing.

"They resist, they fight back, and in the struggle the gunman dies," Sliwa, a former Republican mayoral candidate, told Fox News Digital. "The two obviously are able to live another day. Nobody cries for the thug … and yet these two men shouldn’t have been put in that position."

Under New York’s self-defense laws, a step-by-step justification of the altercation could come into play.

"I applaud their efforts," Sliwa said of the Staten Island robbery targets. "But we’ll see what the district attorney does."

Then-Republican candidate for New York City mayor Curtis Sliwa campaigns in Manhattan on Nov. 1, 2021. He told Fox News Digital on Sept. 13, 2022, that New York needs a Florida-style "stand your ground" law to protect those who are protecting themselves as his hometown sees an alarming spike in robberies. (Reuters/Mike Segar)

Richmond County District Attorney Michael McMahon’s office did not respond to multiple requests for comment on the case.

"New York has a ‘duty to retreat’ — if you’re faced with a threat, you have a duty to retreat unless you feel that you can’t and your life is in danger," Ralph Cilento, a retired NYPD lieutenant commander of detectives and professor of police science at John Jay College of Criminal Justice in the New York City, told Fox News Digital. "Then you can use physical force to stop physical force against you or another." 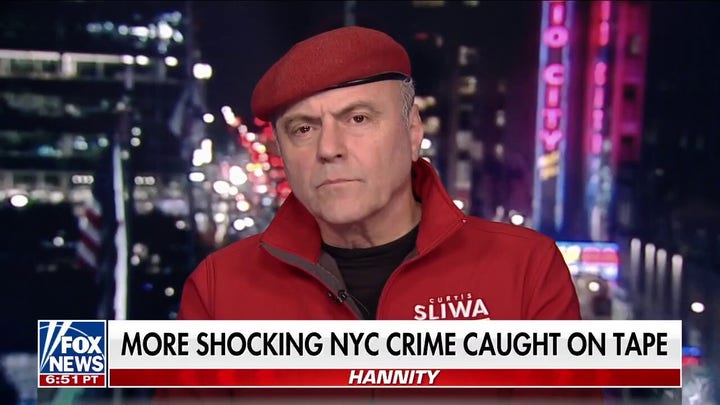 Earlier this year, Jose Alba, a Manhattan bodega clerk, was accused of second-degree murder after a man stormed into his shop, barged behind the counter and attacked him in a struggle caught on video. He fought back, stabbing his assailant, Austin Simon, who later died.

In July, Manhattan District Attorney Alvin Bragg backtracked and dropped the charges after a public outcry.

Alba’s self-defense was justified because Simon instigated the attack and because he attempted to escape but was cornered in the small alcove behind the counter, according to law enforcement experts who reviewed the video. Simon also had a box-cutter in his pocket, although he did not take it out during the altercation.

"These are matters that happen spontaneously, instantaneously, because of a lack of law and order," Sliwa added. "You need a ‘stand your ground’ law here to protect those who are protecting themselves when they’re being robbed or assaulted or held at gunpoint. It’s ludicrous."

These types of incidents illustrate how crime has spread in recent years throughout the Big Apple, Sliwa said. In the crime wave of the 1980s, it was mostly focused in troubled neighborhoods. Now it happens everywhere, including places with historically low crime, as prosecutors, courts and elected officials have appeared reluctant to support the NYPD.

In one case, a good Samaritan knocked a handgun out of another would-be robber's hands in Washington Heights, Sliwa said, giving the victim a chance to escape.

"To me, this is not a rise in vigilantism — this is a rise in legal self-help for more and more people who have simply not been given a choice," Paul Mauro, an attorney and retired NYPD inspector, told Fox News Digital. "Unfortunately, I expect we will see more Jose Albas."

TUCKER CARLSON: SELF-DEFENSE IS THE CORNERSTONE OF ALL LIBERTY

The Staten Island fatality comes as the city grapples with a combination of low police morale and rising violent crimes. Statistics show robberies were up nearly 40% to date this year compared to last, as of Sept. 11. Felony assaults climbed 17.6% in that same period, while murders declined 12.8%.

"This is not the Wild West," Cilento said. "Sometime back in the 1880s they said, ‘Put away your Colt Peacemaker, we’re not going to shoot it out in front of the saloon, let the police take care of you.' Policing is like an unwritten social contract between the citizens and the people who protect them. In other words, the government."

But when the public sees an increase in crimes like violent muggings, residents can grow skeptical of the government’s ability to uphold its end of the bargain.

Cilento warned that the "perception of fear" can invite violence in both the form of increased incidents of self-defense, as in Alba’s case, and the Staten Island robbery, as well as, if things get out of control, vigilantism.

"Vigilantism is born from fear," he said. "This is why you have an uptick of people carrying pepper spray, people carrying knives, all kinds of legal weapons, because they’re afraid and people have had enough."

Last month, mixed martial artist Ro Malabanan made headlines after he witnessed an unprovoked "sucker punch" attack in Manhattan and restrained the suspect. 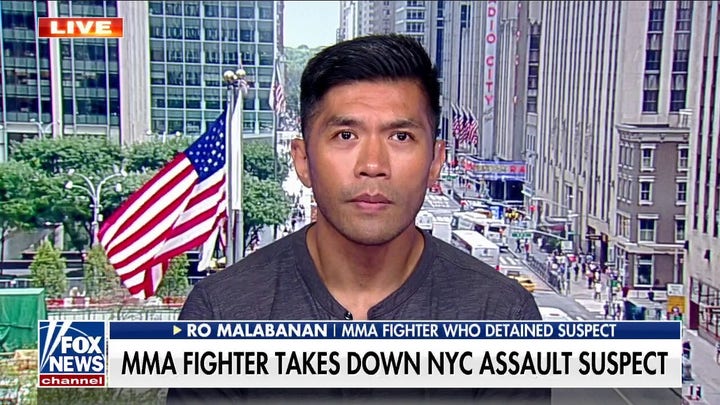 "I was able to use my training to be able to subdue him," he told "America’s Newsroom" last month. He tackled and held the assailant until police arrived with the help of another good Samaritan, video shows.

But experts warn that not everyone is capable of taking down a suspect or knowledgeable of New York’s self-defense laws, which Cilento described as "murky."

Investigators have not released many details about the Staten Island incident and have not definitively said whether there will be charges. But it’s possible, Cilento said, that after defending themselves, the victims took it a step further, which could lead to legal trouble.

"Once you take his gun, and you punched him out, he no longer poses a threat to you," Cilento said. "So, I would argue at that point that you have a responsibility under the law to retreat, but self-defense law is extraordinarily murky because of this."

In the case of Alba, the bodega owner, each step had to be justified as self-defense before the charges against him were eventually dropped, even with the attack against him caught on video.

"It’s easy to get a visceral response for folks that feel like the bad guys are getting the upper hand and to applaud the seeming heroics of the civilian who comes out on top, whether it’s Jose Alba," said Patrick J. Brosnan, founder and CEO of Brosnan Risk Consultants, a national law enforcement firm with operations in 500 cities. "It’s easy to applaud it and feel good about it, but if they end up getting indicted because they didn’t know the framework of the self-defense laws, it becomes very quickly a sad news tale." 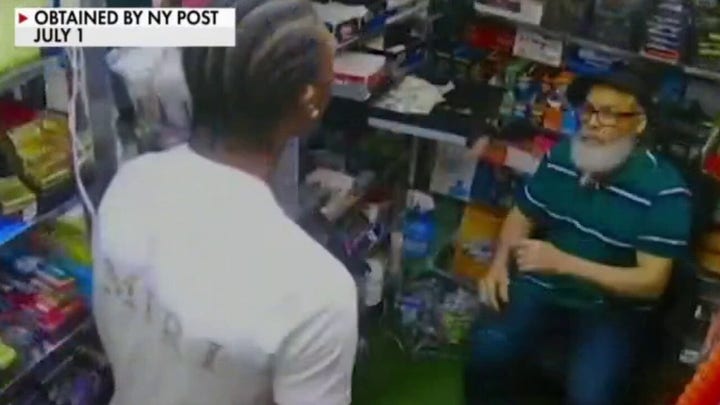 The city’s crime wave has prompted a growing number of private citizens to take additional measures to ensure their own safety. To that end, Brosnan’s firm has been hired to patrol neighborhoods in the city, its suburbs and elsewhere around the country to "deter, detect, observe and report" crime.

He said this practice has become increasingly necessary due to a range of factors, including demoralized police forces, officers leaving their jobs and "rogue prosecutors" who refrain from enforcing the laws on the books.

While he said victims should comply because "money can be replaced" and good health can’t, he said that with the city’s alarming rise in robberies more self-defense cases could crop up.

While the average citizen’s survival instinct may kick in, the city’s self-defense rules could impact them down the line. New York’s duty to retreat requirement is a stark difference from "stand your ground" laws like what they have in Florida.

"If someone attacks, you must retreat, and if you cannot retreat, and you’re in fear of deadly physical harm to yourself or a third party, you are then justified," he said. "And that’s a big deal. Does a math teacher from Canarsie know it? Does a bus driver from Queens know it? It’s not likely."