The New York City bodega worker who was charged with second-degree murder after allegedly fatally stabbing an ex-convict who stormed into the store during a dispute wanted to avoid the conflict all together, new video shows.

The video is the first that provides audio of the words exchanged between the two before the fatal stabbing on July 1.

Alba's exchange with Simon, 35, unfolded after Simon's girlfriend tried to check out at the Blue Moon convenience store, but her electronic benefits card did not work.

"Did you put food?" the girlfriend is heard in the video asking Alba, ostensibly referring to how the order was rung up.

"OK, mama, let me do it another time. My God," Alba responded.

"There’s money on there," she said, according to the New York Post's video.

The girlfriend accused Alba of taking the bag of chips she was trying to purchase for her daughter.

"You can’t touch my daughter. Don’t snatch that out of my daughter, you f–king piece of shit!" she is heard saying off camera, the New York Post reported.

The video does not appear to show Alba taking the chips.

"I’m gonna bring my n– down here and he gonna f–k you up. My n— is gonna come down here right now and f–k you up!" she told Alba before Simon entered the store.

"That’s not my fault, it’s not working," Alba said, according to the video.

The video, which was edited according the New York Post, also shows Alba talking with customers before Simon enters the store. 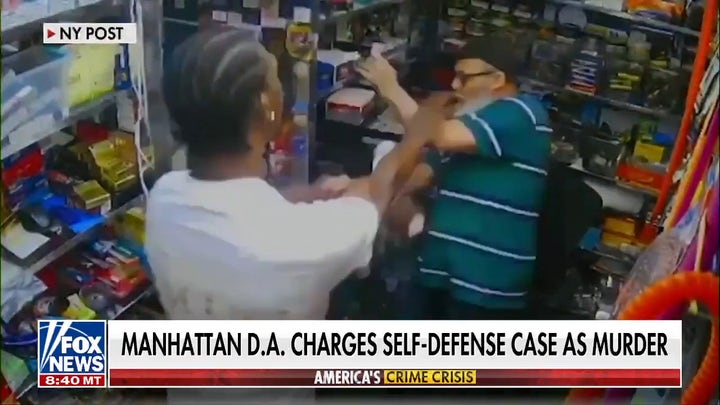 Simon soon entered the store and made a beeline for Alba behind the counter.

"What’s up with you? N—-r what is wrong with you?" Simon is heard saying. The newest New York Post video does not show the stabbing, but previous videos show Simon shove Alba before the fatal stabbing.

When Simon tried to "steer" Alba from behind the counter, the worker "picked up a kitchen knife that was stashed behind the counter and stabbed Mr. Simon in the neck and chest at least five times," according to a criminal complaint previously obtained by Fox News Digital.

The girlfriend also allegedly pulled a knife from her purse and stabbed Alba in the arm.

Simon, who was out on parole at the time after being imprisoned for assaulting a police officer, soon died at a local hospital.

NEW YORK, NEW YORK - OCTOBER 19:  The entrance to Rikers Island, home to the main jail complex, is shown from the Queens borough as shown on October 19, 2021 in New York City. (Photo by Spencer Platt/Getty Images)

Alba was charged with second-degree murder following the incident. He was freed from Rikers Island prison after posting a reduced, $50,000 bail package on Thursday. The girlfriend has not been charged in the case for allegedly stabbing Alba.

Critics have since blasted the charge, arguing Alba was acting in self-defense.

TUCKER CARLSON: SELF-DEFENSE IS THE CORNERSTONE OF ALL LIBERTY

"I feel like I'm in the Twilight Zone. What kind of sick, twisted place are we sitting in here in the middle of New York City, where this man who is defending himself is put in jail?" Fox News'"Outnumbered" co-host Kayleigh McEnany said last week. "Simon came back reportedly about 10 minutes later with a mission to confront this individual, as you point out, shoved him against a wall. As you point out, grabbed him on the back of a neck. And all he did was defend himself."

New York City Mayor Eric Adams has also shown support for Alba, saying people should not be attacked while working.

"This is the same message that I’ve been stating over and over again: that hard-working New Yorkers, and Americans to be honest with you, should not be attacked in their place of work," Adams said during a radio interview Friday. "There is a line that must be drawn when you are a primary aggressor and that is what I saw on the video."