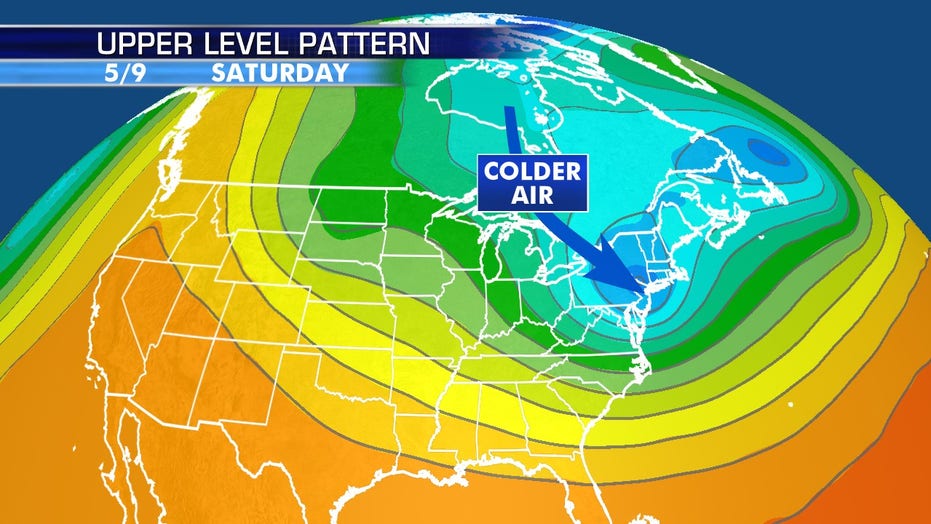 National forecast for Monday, May 4

The Southwest may be feeling the heat for the full first week of May, but a weather pattern setting up across the U.S. may bring winter-like conditions -- including snow -- to the Northeast in time for Mother's Day weekend.

The National Weather Service's (NWS) Weather Prediction Center said colder air is expected to settle into much of the northern and northeastern U.S. by mid-week as a low-pressure system brings stormy weather across the central Plains toward the East Coast by Wednesday.

"We're in kind of almost an autumn-like pattern, as we have this trough across the Northeast and the threat for those strong storms, and with that the cooler temperatures for parts of the northern tier of the country." Fox News senior meteorologist Janice Dean said Monday on "Fox & Friends."

According to the WPC, an initial shot of colder air will appear beginning on Monday.

Colder air is expected to change any rain over to wet snow or mixed precipitation across northern New England on Monday night before tapering off Tuesday morning.

A surge of cold air will arrive in the Northeast in time for Mother's Day weekend, with the possibility of snow for some high-elevation locations. (Fox News)

Areas near the upper Great Lakes could also see wintry precipitation Tuesday morning as rain over the northern Plains moves into the upper Midwest.

According to the WPC, another surge of colder air will arrive in the Northeast late into the week into next weekend.

"As we go through the next couple of days, we're going to see the potential for very hot temperatures across the South and the Southwest, but then very cool over the northern tier of the country, including the Northeast," Dean said.

High temperatures of between10 to 20 degrees below normal will have locations in Northeast feel more like late March than early May.

Across the higher terrain of New York into New England, forecasters also said that some snow is possible by Saturday.

"Just a heads up as we head into the weekend, Mother's Day weekend, we could have the risk for snow across portions of the Northeast," Dean said.