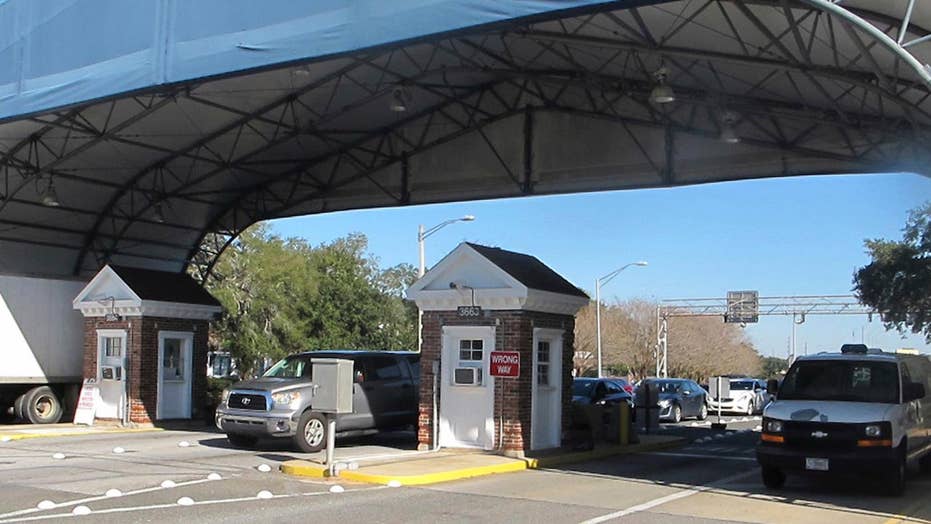 Authorities investigating a deadly shooting at a U.S. naval base in Florida say Saudi nationals linked to the attack are now accounted for, though no arrests have been made.

Rachel L. Rojas, FBI agent in charge, told reporters that the community is under no immediate threat. Authorities said a Saudi commanding officer has ordered all students from the country to remain at one location at the base.

“There are a number of Saudi students who are close to the shooter and continue to cooperate in this investigation," Rojas said. “The Saudi government has pledged to fully cooperate with our investigation.”

The FBI's Jacksonville office identified the shooter in a statement Saturday night as Mohammed Alshamrani, 21, and released a photo of him. Investigators said he was a 2nd Lt. in the Royal Saudi Air Force and was a student naval flight officer of Naval Aviation Schools Command when he opened fire Friday at Naval Air Station Pensacola in Florida before being shot dead.

In the days since the attack, a U.S. official who spoke on condition of anonymity after being briefed by federal authorities told The Associated Press that 10 Saudi students were being held on the base.

U.S. Northern Command (Northcom) has called for increased random security checks at all sites as authorities investigating the attack are still working to determine whether the shooting was an act of terrorism.

"There's no question what it is, it's terrorism," Florida Sen. Rick Scott (R) said Sunday on "Fox & Friends." "It's radical Islam."

Lt. Cmdr. Michael Hatfield told Fox News on Saturday that after the shootings last week at Joint Base Pearl Harbor-Hickam in Hawaii and in Florida, Northcom has directed all Defense Department installations, facilities and units within the U.S. to immediately assess force protection measures and "implement increased random security measures appropriate for their facilities."

"The advisory also told leaders to remind their workforce to remain alert and if they see something, to say something by immediately reporting to appropriate authorities any suspicious activity they may observe," Hatfield continued.

On Saturday, a U.S. official told The Associated Press that Alshamrani hosted a dinner party earlier in the week where he and three others watched videos of mass shootings.

The official who spoke Saturday said one of the three students who attended the dinner party hosted by the attacker recorded video outside the classroom building while the shooting was taking place on Friday. Two other Saudi students watched from a car, the official said.

Scott said Sunday that while Saudi Arabia has been an ally, "they have to step up here," calling reports of the dinner party and viewing of mass shooting videos "disgusting."

"The fact that the FBI has not been able to, the reports say, the FBI has not been able to talk to every airman. I mean, I can't imagine that," he said on "Fox & Friends." "If the Saudi government is our ally, our partner, they will make sure that there is full cooperation, not one airman needs to leave this country until the complete investigation."

In the weeks leading up to the shooting, Alshamrani and the same three other Saudi military trainees made a visit to New York City where they went to several museums and Rockefeller Center, a person briefed on the investigation told the New York Times.

Federal investigators are now focused on whether the trip was an extended tourist trip during the Thanksgiving holiday week or if the group of Saudi trainees had other motives or were meeting with anyone else in New York, according to The Times. Of the 10 Saudi trainees reportedly detained, three of them are the ones from the dinner party who claimed they were only filming the shooting because they happened to be there at the time and wanted to capture the moment, the U.S. official told the New York Times.

In an exclusive interview on "Fox News Sunday," Defense Secretary Mark Esper said it's unclear if they were filming it before it began or if it was something where they picked up their phones filmed it when they saw it unfolding.

"You know, today, people pull out their phones and film everything and anything that happens," Esper told Fox News' Chris Wallace.

In remarks at a gathering of top U.S. defense and military officials on Saturday, Defense Secretary Mark Esper was asked whether he could say definitively that the shooting was an act of terrorism.

In the wake of the deadly shooting, President Trump said Saturday that he would review policies governing foreign military training in the U.S but declined to say whether the shooting was terrorism-related.

The U.S. has long had a robust training program for Saudis, providing assistance in the U.S. and in the kingdom. Currently, more than 850 Saudis are in the United States for various training activities. They are among more than 5,000 foreign students from 153 countries in the U.S. going through military training.

Sen. Rick Scott discusses heroism in the Naval Air Base shooting on ‘Fox and Friends’.

“This has been done for many decades,” Trump said. “I guess we're going to have to look into the whole procedure. We'll start that immediately."

Scott on Sunday called for suspending the training program pending a thorough review.

"We have got to make sure that American sailors, American soldiers are safe. We have to have a full review of what happened here," he said on "Fox & Friends." "We cannot be taking risks for our sailors."

“The Sailors that lost their lives in the line of duty and showed exceptional heroism and bravery in the face of evil," Capt. Tim Kinsella, the commanding officer of Naval Air Station Pensacola, said in a statement. “When confronted, they didn’t run from danger; they ran towards it and saved lives."

Kinsella said Naval Air Station Pensacola, one of the Navy's most historic and storied bases, would remain closed until further notice. The base sprawls along the waterfront southwest of the city's downtown and dominates the economy of the surrounding area.

Part of the base resembles a college campus, with buildings where, in addition to foreign students, 60,000 members of the U.S. Navy, Marines, Air Force and Coast Guard train each year in multiple fields of aviation.

The FBI's Jacksonville office has said it's not aware of any credible threat toward the Pensacola community at this time, but anyone with information regarding Alshamrani and his activities before the shooting is encouraged to call 1-800-CALL-FBI.