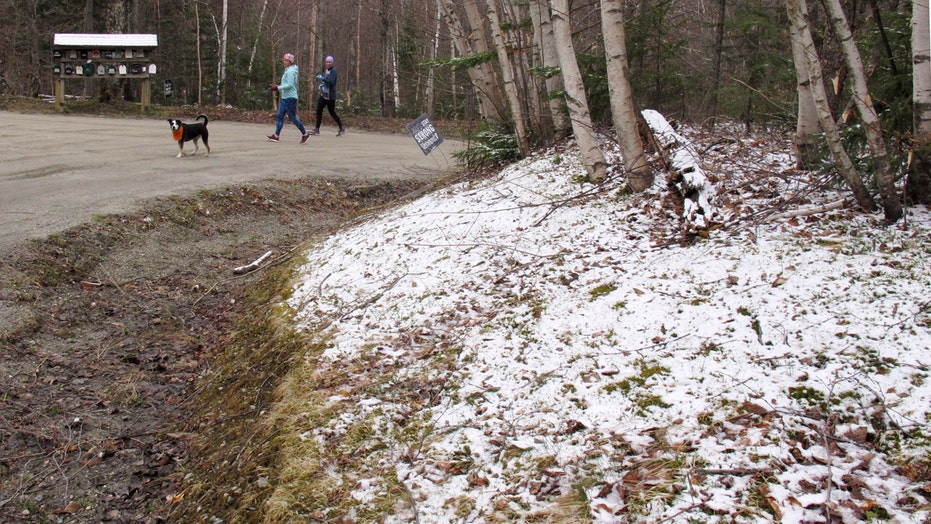 Residents across Northern New England woke up to early May snow on Tuesday, the first of several rounds of frozen precipitation before a colder blast expected Mother's Day weekend.

On Wednesday, a low-pressure system moving from the Midwest into the Mid-Atlantic brought rain and snow to parts of Pennsylvania and Western New York, according to Fox News senior meteorologist Janice Dean.

"As you go across the Great Lakes and the interior Northeast, we actually have wind chills in the freezing range," Dean said on "Fox & Friends."

Other snow showers were reported in parts of the White Mountains in New Hampshire, in areas of northern Vermont and parts of Maine.

Photos from near Stowe, Vermont, showed tree branches and hillsides covered by a light dusting of snow.

A dusting of snow covers tree branches in Stowe, Vt., on Tuesday May 5, 2020. (AP Photo/Wilson Ring)

Frost advisories were posted Wednesday for areas of Western New York near the Great Lakes, as well as for the Hudson Valley.

An Arctic blast is forecast to impact the Northeast for Mother's Day Weekend. (Fox News)

The National Weather Service (NWS) office in State College, Pa. said that rain overspreading central Pennsylvania on Wednesday morning may mix with wet snow at higher terrain, but no accumulations are expected.

"Temperatures will only top out in the mid 40s, within just a few degrees of the record coldest high temperatures for May 6," the NWS tweeted.

As the storm system producing rain and snow in Pennsylvania moves off the coast, much cooler Arctic air will settle in behind it.

Record low temperatures are possible by Saturday morning in the Midwest and Northeast. (Fox News)

"It's gonna get colder as we head into the weekend, we're probably going to set quite a few record lows as we get into Friday and Saturday," Dean said.

The coldest air will arrive Friday night into Saturday morning, with the chilliest air expected from the Great Lakes and Appalachians to the Mid-Atlantic and Northeast.

Measurable snow is also forecast due to the blast of cold air in the Northeast for Mother's Day Weekend. (Fox News)

The Arctic air will lead to some snow across the interior Northeast, with heavier snow by Saturday across interior New England.