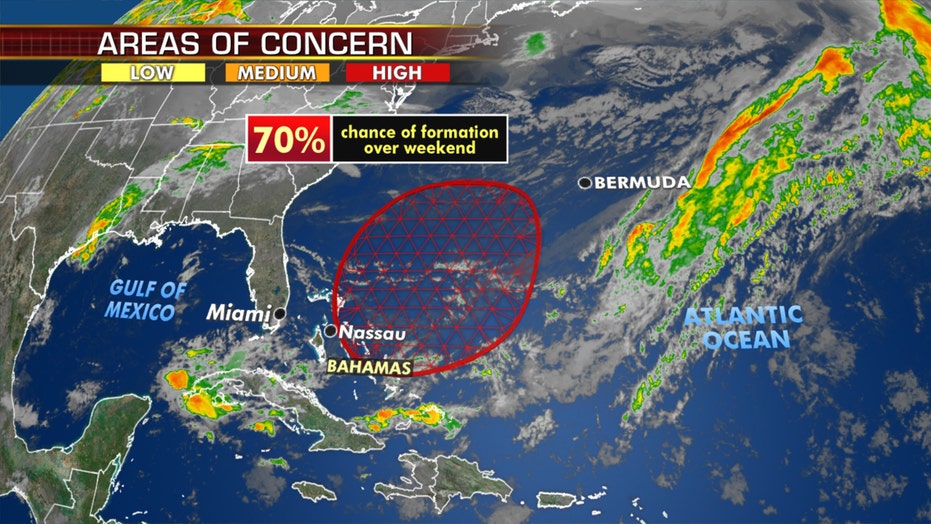 National forecast for Wednesday, May 13

With just over two weeks before the start of the 2020 Atlantic hurricane season, forecasters are monitoring an area off Florida and the Bahamas where the first named storm is forecast to develop by this weekend.

"This storm will be named Arthur," Fox News senior meteorologist Janice Dean said Wednesday on "Fox & Friends First." "We do anticipate either a tropical or a subtropical storm to form this weekend."

As of Wednesday, the NHC said that environmental conditions appear conducive for its gradual development.

There is a 70 percent chance that a subtropical depression or storm forms through the next five days while the system moves northeastward over the western Atlantic, according to the National Hurricane Center. (Fox News)

Forecasters said there is a 70 percent chance that a subtropical depression or storm forms through the next five days while the system moves northeastward over the western Atlantic.

If the system acquires enough tropical characteristics to become a tropical or subtropical Storm, forecasters then will name it "Arthur."

A tropical forecast to forecast to develop by the end of the week off the Bahamas. (Fox News)

While the system won’t impact the Southeast U.S., Bermuda and shipping interests will need to monitor the system as it moves northeastward.

"The good news is that all the tropical models have it offshore, but Bermuda is going to have to watch this," Dean said.

The Atlantic basin hurricane season officially runs from June 1 to November 30, but there have been recent exceptions.

"The official season starts June 1, but we have had storms that have formed as early as May, even earlier than that," Dean said on "Fox & Friends First."

A look back at previous storms that have formed before June 1, the official start of Atlantic hurricane season. (Fox News)

In fact, the first named storm of the Atlantic hurricane season was in May every year since 2015.

Since 2003, there also have been pre-June 1 named storms for nine out of 17 seasons.

All signs are pointing to more activity than average for this approaching Atlantic hurricane season, due primarily to the absence of El Niño, with less hostile wind shear, along with warmer than average sea-surface temperatures. (Fox News)

"We had one actually last year, that was Andrea, so that was in the Atlantic basin as well," Dean said Wednesday.

On average, there is a tropical storm every two years in June, according to Dean.

All signs are pointing to more activity than average this season, due primarily to the absence of El Niño, with less hostile wind shear, along with warmer than average sea-surface temperatures.

What to know about the approaching Atlantic hurricane season. (Fox News)

On average, 12 tropical storms – six of which become hurricanes – form over the Atlantic Ocean, Caribbean Sea or the Gulf of Mexico during hurricane season, according to the National Weather Service.

While the National Oceanic and Atmospheric Administration Climate Prediction Center will provide its seasonal outlook for the Atlantic basin on May 21, researchers at Colorado State University are predicting an above-average hurricane season this year, citing the likely absence of El Niño as a primary factor.