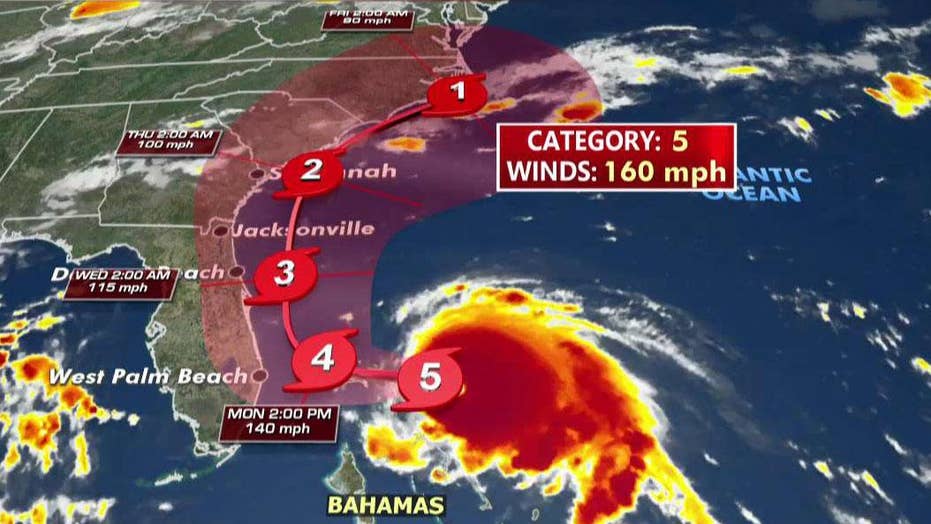 The Category 5 hurricane is the highest on the Saffir-Simpson scale; Janice Dean reports.

A menacing Hurricane Dorian made landfall in the northern Bahamas midday Sunday after strengthening to a "catastrophic" Category 5 storm -- packing winds of 185 mph and the threat of torrential rain that could last for days as millions in the U.S. along the Southeast coast from Florida to North Carolina are keeping an eye on where the storm may head next.

The National Hurricane Center said in a 2 p.m. ET Sunday advisory that Dorian was a Category 5 storm with sustained winds of 185 mph and it was moving west at 7 mph, located directly over Great Abaco Island in the Bahamas. The storm made the first landfall at 12:40 p.m. in Elbow Cay and is located about 185 miles east of West Palm Beach, Florida.

"This is a life-threatening situation. Residents there should take immediate shelter," the NHC said. Do not venture into the eye if it passes over your location."

Wind gusts of over 220 mph and a storm surge of 18 to 23 feet above normal tide levels with higher "destructive waves" are forecast to continue for several hours over the affected areas. The storm is tied for number two for the highest sustained winds on record in an Atlantic hurricane, according to Fox News Chief Meteorologist Rick Reichmuth.

"Right now one of the strongest storms in history for this region," NHC Director Ken Graham said in a morning briefing. The NHC said that Dorian is tied for the strongest Atlantic hurricane landfall on record with the 1935 Labor Day hurricane, and has since made a second landfall at 2 p.m. on Great Abaco Island near Marsh Harbour.

Dorian is an "extremely dangerous" hurricane according to Fox News Senior Meteorologist Janice Dean, who said the storm is set to deliver a "devastating blow" to the northwest Bahamas Sunday through Monday.

"A perfect beast of a storm," Dean said Sunday morning on "Fox & Friends," adding that the northwestern Bahamas have never had a direct impact of a Category 5 storm before.

"This is not a storm to be messed with," Dean added.

In the northern stretches of the Bahamas archipelago, hundreds of people hunkered down in schools, churches, and other shelters as Dorian approached. Power and water outages were reported, with crews working in some communities as authorities warned that all government workers will remain indoors once winds reach 40 mph.

Conditions were deteriorating rapidly in the Bahamas on Sunday morning. Video from ZNS Bahamas from 9:30 a.m. showed water rising as winds were picking up.

"The winds have definitely picked up. Trees are banging, they're swaying. They've even breaking," ZNS reporter Megan Shepherd said in a video posted to Twitter.

Another Twitter user posted a video to Twitter from a family member of the storm's fierce winds reaching Abaco.

Another resident of the Bahamas reported that Abaco was "almost underwater" as the storm approached.

Government spokesman Kevin Harris said Sunday that Dorian is expected to impact some 73,000 residents and 21,000 homes. Authorities closed airports for The Abaco Islands, Grand Bahama, and Bimini, but Lynden Pindling International Airport at the capital of Nassau remained open.

"There's fear," American Jack Pittard told the Associated Press in a phone interview Sunday morning as the eyewall approached the islands. "I'm worried about destruction of property, but I don't believe there's going to be loss of lives here."

A baby sleeps inside a church that was opened up as a shelter for residents who will wait out Hurricane Dorian in Freeport on Grand Bahama, Bahamas, Sunday, Sept. 1, 2019. (AP Photo/Ramon Espinosa)

Officials in the Bahamas said Sunday that dozens of people were ignoring evacuation orders, and they were warned that they were placing their lives in danger. Among those refusing to leave were 32 people in Sweetings Cay, and a group that sought safety in Old Bahama Bay resort, which officials said was not safe.

"The end could be fatal," said Samuel Butler, assistant police commissioner, told the AP. "We ask you, we beg you, we plead with you to get to a place of safety."

Butler said officials were closing certain roads with heavy equipment and warned that those on the other side would be stranded until after Dorian has passed. The government has opened 14 shelters across the Bahamas.

Women sit on cots inside a church now serving as a shelter for residents who will wait out Hurricane Dorian in Freeport on Grand Bahama, Bahamas, Sunday, Sept. 1, 2019. (AP Photo/Ramon Espinosa)

"We cannot stress the amount of devastation and catastrophic impact that Hurricane Dorian is expected to bring," said Shavonne Moxey-Bonamy, the Bahamas chief meteorologist.

The NHC said that data at 9:30 a.m. from an Air Force Reserve Hurricane Hunter aircraft show the hurricane has continued to intensify.

Between 12 to 24 inches of rain is forecast for the northwestern Bahamas, with isolated amounts up to 30 inches, according to the NHC. Dorian is also forecast to bring a life-threatening storm surge with water levels raised as much as 15 to 20 feet above normal in areas of onshore winds on the Abaco Islands and Grand Bahama Island.

"Near the coast, the surge will be accompanied by large and destructive waves," the NHC said.

Florida Gov. Ron DeSantis asked Floridians to keep the Bahamas in their thoughts while also preparing for whatever impacts Dorian may bring. The Sunshine State declared a state of emergency last week ahead of the storm of assist with preparations.

DORIAN NEARS BAHAMAS BRINGING 150 MPH WINDS, THREAT OF STORM SURGE; TRUMP WARNS IT COULD BE AMONG 'STRONGEST' TO HIT IN DECADES

Bahamas Prime Minister Hubert Minnis warned that Dorian is a "dangerous storm" and said any "who do not evacuate are placing themselves in extreme danger and can expect a catastrophic consequence."

Small skiffs shuttled Saturday between outlying fishing communities and McLean's Town, a settlement of a few dozen homes at the eastern end of Grand Bahama island, about 150 miles from Florida's Atlantic coast. Most people came from Sweeting Cay, a fishing town of a few hundred people about 5 feet above sea level.

"We're not taking no chances," Margaret Bassett, a ferry boat driver for the Deep Water Cay resort, told the AP. "They said evacuate, you have to evacuate."

The slow-moving storm may take until Monday afternoon to pass over the Bahamas, and then turn sharply and skirt up the U.S. coast, possibly staying just off Florida and Georgia on Tuesday and Wednesday and then affecting South Carolina and North Carolina on Thursday.

But forecasters warn that Dorian's path could easily shift and bring some of the worst conditions to coastal locations.

The uncertainties of where Hurricane Dorian could turn north and possibly impact the Southeast coast of the U.S. (Fox News)

"If there is a difference in the track by 30 miles, that's the difference between tropical-storm-force and hurricane winds," Dean said Sunday on "Fox & Friends." That's why we have to wait for every forecast."

President Trump, who canceled his planned trip to Poland this weekend to monitor Dorian, said Sunday morning that in addition to Florida, South Carolina, North Carolina, and Georgia will most likely be hit (much) harder than anticipated.

"Looking like one of the largest hurricanes ever. Already category 5," Trump tweeted. "BE CAREFUL! GOD BLESS EVERYONE!"

Weather officials in Alabama, however, stressed that Alabama will not see any impacts from Dorian.

"We repeat, no impacts from Hurricane Dorian will be felt across Alabama," NWS Birmingham said on Twitter. "The system will remain too far east."

The evacuation includes barrier islands, mobile homes, and areas that are prone to flood because of Hurricane Dorian.

While the official forecast path for Dorian curves the storm away from the area before it strikes land, the NHC said there is about a 50 percent chance West Palm Beach will get hurricane winds by early Wednesday.

The hurricane upended some Labor Day holiday weekend plans in the U.S.: Major airlines allowed travelers to change their reservations without fees, big cruise lines rerouted their ships and Cumberland Island National Seashore off Georgia closed to visitors. Disney World and Orlando's other resorts held off announcing any closings.