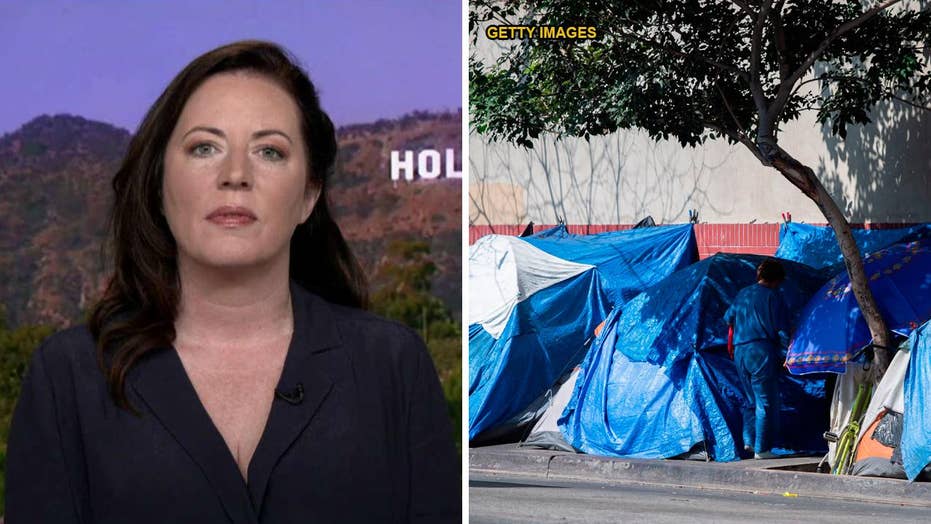 Heidi Van Tassell speaks with Fox News about the horrific assault on her by a homeless man who dumped a canister of hot feces on her head while she was leaving a Los Angeles restaurant. She recounts the assault, the immediate aftermath, and why she thinks the homeless crisis is only getting worse.

Heidi Van Tassell was leaving a restaurant in Los Angeles when a 6'2"  homeless man pulled her out of her car and poured a bucket of hot human feces over her head.

Attorney Brandon Coen was walking his dog when a homeless man - who had been caught on camera moments earlier hitting a woman - came up to Coen and punched him in the head.

Well-known tailor Albert Davtyan was hit and injured by a truck after being pushed into its path by a transient. His attacker, Garrett Bolt, had been living on the streets and was on probation in an assault with a deadly weapon case.

Van Tassell, Coen and Davtyan's experiences are not isolated incidents. They are three people out of thousands of Californians who have been victimized by crimes in which the suspects are identified as homeless or transient.

Residents like Tassell say they are frustrated and fed up with California's elected leaders as well as the authorities for not doing more to protect people.

Tassell told Fox News she called the Los Angeles Police Department numerous times for information on her case but that none of the calls were returned. She also called the district attorney's office, which also did not return her calls.

The man who attacked Tassell was identified in court records as Jere Blessings, a transient with "schizophrenia and psychotic disorders." Blessings was charged with battery and taken to jail but Tassell said she was recently notified that Blessings was back on the streets because he was found unfit to stand trial.

"So they let him go, asked him where he wanted to go, they dropped him off and now he's in around the same spot," Tassell said. "He's schizophrenic and he's just not mentally stable obviously."

Tassell said when Blessings attacked her she thought she was "going to die."

"He didn't say anything so the look in his eyes was ... I thought he was going to murder me ... I thought he had a knife," Tassell said. "I've always thought I was a tough person. I  have lived in Hollywood for a very long time and I thought I'd be tough and you know, scream, and I couldn't do anything."

I don't know how this has suddenly become the new normal here. I'm supposed to feel safe because stuff like that happens all the time? That's some West Coast logic for you right there.

— Kelly Herlocks, a Michigan native who has lived in LA for three years

The incident has left Tassell traumatized.

A LAPD spokesperson told Fox News that incidents like Tassell's happen on a pretty regular basis.

"We have a lot of homeless people in Los Angeles," the officer said. "People do get confronted by the homeless and sometimes liquids get spilled on them.

That wasn't the answer Kelly Herlocks, a Michigan native who has lived in LA for three years, was looking for.

"I don't know how this has suddenly become the new normal here," she told Fox News. "I'm supposed to feel safe because stuff like that happens all the time? That's some West Coast logic for you right there."

HOMELESSNESS AMONG VETERANS DROPPED SIGHTLY AS OF JANUARY OF THIS YEAR, WHITE HOUSE SAYS

As complaints from residents have increased, an angry backlash against the homeless has grown more pronounced. Numerous reports have chronicled the abusive treatment of people on the street. Last month, a homeless man named Freddy G. was dozing off with a book in his Echo Park tent when someone threw a firecracker at him, LA Mag reported.

Homeless advocates like Pete White, executive director of the Los Angeles Community Action Network, said he's seen an uptick in violence against the homeless over the past few months and blames city leaders who he accused of stoking an anti-homeless sentiment. He also believes that policies that criminalize homelessness are only adding to the problem.

"A lot of rhetoric coming out of City Hall calls homeless people dangerous, and fuels this vigilante spirit," he said.

In San Diego, a man accused of attacking several homeless men and women in 2016, is awaiting trial. Jon David Guerrero, 42, was bound over for trial Friday on 15 felony counts, including murder, attempted murder, arson and assault with a deadly weapon. Some of his victims were set on fire, while others were impaled with railroad spikes.