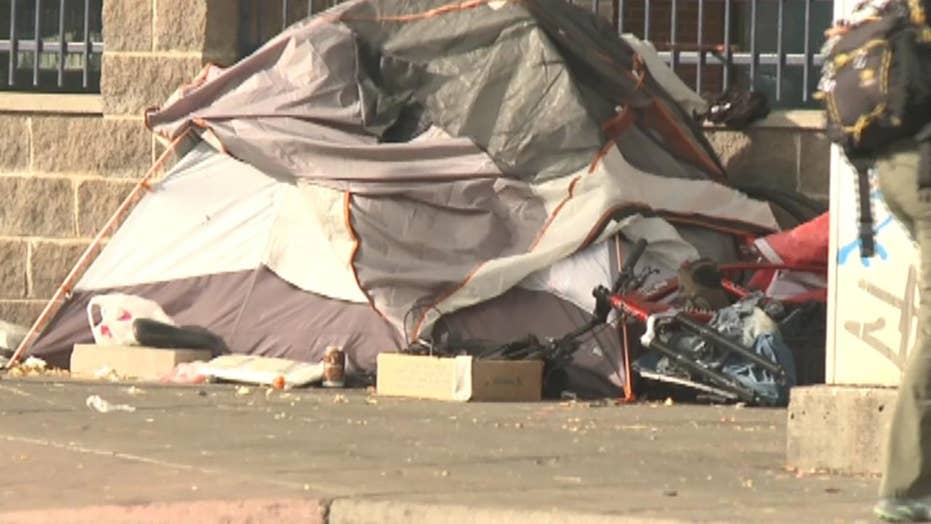 The state of Colorado saw a .8 percent dip in homelessness last year, but the state is still third in the country in terms of homeless families without shelter.

Even as the economy continues to boom, the number of homeless Americans crept upward in 2018 as higher rents push people out onto the streets -- particularly on the West Coast -- while cities consider pouring in millions of dollars to fix the problem.

The Department of Housing and Urban Development report released Monday said the national rate of homelessness rose by 0.3 percent, with 552,830 people experiencing homelessness during a count on a single night in January 2018.

The uptick of about 2,000 people from 2017 was the second increase in two years and came after seven straight years of declines amid an unemployment level near a 50-year low.

"We still have a long way to go even though there's been significant progress," HUD Secretary Ben Carson told reporters during a conference call.

Thirty-one states and the District of Columbia reported decreases in homelessness in the past year, while 19 states reported increases.

A graph showing the numbers of homeless in the United States since 2007. (HUD)

The number of homeless referred to as unsheltered — those who live in the streets, encampments or other open places — was more than 194,000 nationwide in 2018. That also was up 2 percent from last year.

Federal officials said the overall increase this year was also driven by 4,000 people placed in emergency shelters after hurricanes, wildfires and other disasters.

Cities in California, Oregon and Washington have driven an overall spike in the number of homeless people nationwide in recent years. According to data from the latest HUD report, the region still leads the nation in terms of highest rates of unsheltered people.

An estimate of the numbers homeless individuals, by state, in 2018. (HUD)

Just over 68 percent of the homeless population in California is categorized as unsheltered, while Oregon and Washington state report being at 61 percent and 47 percent, respectively.

The states with the highest and lowers rates of unsheltered people experiencing homelessness in 2018. (HUD)

The Golden State did see a reduction in homelessness by over 1,560 people, with areas such as Los Angeles and San Diego seeing declines, but California still tops the nation with a homeless population of 129,972 people.

Peter Lynn, executive director of the Los Angeles Homeless Services Authority, told the Associated Press the decrease in the region can be credited to results of six months of stepped-up homeless services after Los Angeles County voters raised taxes to help in 2017.

"We're also dealing with the countervailing pressure of housing markets that are pretty unforgiving," he said.

“Communities across the country are getting better and better at making sure that people exit homelessness quickly through Housing First approaches,” Matthew Doherty, executive director of the U.S. Interagency Council on Homelessness, said in a statement. “We know, however, that a lack of housing that people can afford is the fundamental obstacle to making further progress in many communities.”

In San Diego, which also saw a reduction, officials are considering a ballot measure to raise money for affordable housing in 2020. From 2015 through last year, voters on the West Coast approved more than $8 billion in spending — most of it in tax increases — to address homelessness.

But plans for additional taxes to fight the problem have also faced a fight of their own.

In this May 24, 2018, file photo, a man sleeps on the sidewalk as people behind line-up to buy lunch at a Dick's Drive-In restaurant in Seattle. (AP Photo/Elaine Thompson)

Seattle, which has the third-largest homeless population outside of New York or Los Angeles, was forced to repeal a $48 million tax on businesses to raise money for affordable housing after being pressured by companies such as Amazon and Starbucks.

In 2018 the city saw its homeless population rise to more than 12,000, with more than half of them unsheltered. The crisis has caused cemeteries to be turned into dumping grounds, and lawmakers to turn City hall into a shelter.

Seattle reverses course on tax after Starbucks and Amazon pressure council; Bill Bennett and Steve Hilton react on 'The Story.'

The data released by the federal agency was incomplete because several West Coast areas with large populations, including San Francisco, Portland, Oregon, and California's Orange County, did not conduct new counts of unsheltered homeless populations this year. Those places will do fresh surveys in early 2019.

The report did note that veterans are faring better in 2018. Homelessness rates among veterans declined by five percent between 2017 and 2018 and contributed to an overall 48 percent drop since 2009.

Families with children that are homeless also continued to decline by two percent.

In 2018, more than 180,000 people in families with children were experiencing homelessness, and 91 percent of those staying in sheltered locations, according to HUD.