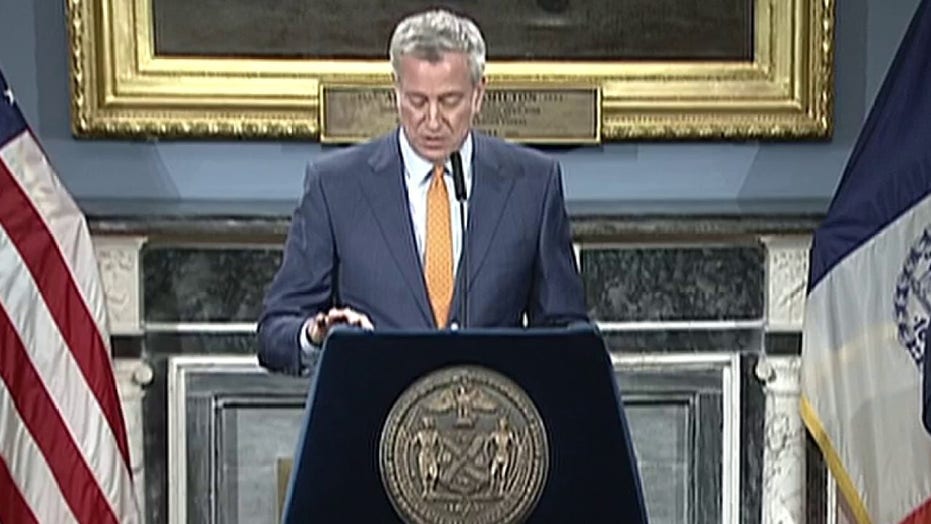 Mayor Bill de Blasio called on Gov. Andrew Cuomo to apologize to the NYPD, as the feud between the two Democrat politicians showed no sign of abating despite New York City being ripped apart by rioting.

In the latest salvo between the two, de Blasio said Cuomo owed an apology to the cops who have been battling rioting over several nights in the city.

The mayor added: “He owes an apology to 36,000 hardworking men and women who have been putting their lives on the line for all of us.”

De Blasio’s comments come after Cuomo called de Blasio’s handling of riots in the city a “disgrace”, even going as far as saying he has the power to “displace” the mayor.

CUOMO SLAMS DE BLASIO'S HANDLING OF RIOTS, CLAIMS HE HAS POWER TO ‘DISPLACE’ MAYOR BUT NOT ‘AT THAT POINT’ 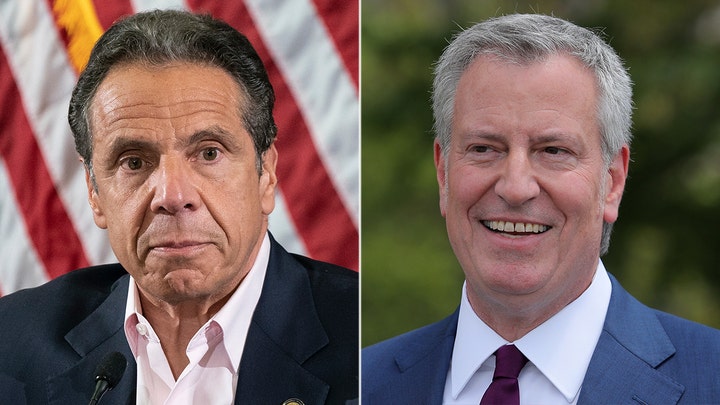 "The NYPD and the mayor did not do their job last night, I believe that," Cuomo said Tuesday.

"You have 38,000 NYPD people, it is the largest police department in the United States of America," he said. "Use 38,000 people and protect property. Use the police, protect property and people. Look at the videos, it was a disgrace."

GIULIANI CALLS ON CUOMO TO REMOVE 'DISGRACE' DE BLASIO AS NYC MAYOR: 'THE MAN SHOULD HANG HIS HEAD IN SHAME'

He went on to say he has the "option is to displace the mayor ... bring in the National Guard" and essentially "take over." However, he said, "I don't think we're at that point."

The tit-for-tat is just the latest in the long-running feud between the New York duo.

On Tuesday night, Rudy Giuliani, the former mayor of New York City told "Hannity" that Cuomo should remove de Blasio from his post.

Police arrest protesters refusing to get off the streets during an imposed curfew while marching in a rally calling for justice over the death of George Floyd Tuesday, June 2, 2020, in New York. Floyd died after being restrained by Minneapolis police officers on May 25. (AP)

"The de Blasio-Cuomo problem is a special problem," Giuliani said. "They hate each other. And frankly, de Blasio is completely incompetent. And the governor, really in good conscience, should replace him because he's the sole reason why the New York City Police Department isn't acting."

"And it really wasn't fair of the governor, who attacked the police department. He should have attacked de Blasio."

"Any comments placing the blame for where we are, on the situation, on the backs of the men and women of this police department that are putting their lives on the line, Neil [Cavuto], I think is disgraceful and [they] should be ashamed of themselves," Shea told "Your World'. "There is politics and there is what is right and that is a disgraceful comment."

De Blasio announced earlier Tuesday that an 8 p.m. curfew for the city will be extended through the end of the week.

Looters continued to break into stores in New York City later Tuesday night and into the morning, despite the curfew, but reports indicated that the scene was much calmer than the past few nights.

As part of the enhanced measures, police installed checkpoints on the streets to block unauthorized vehicles. In some places, as protesters continued to march into the night, there was relative calm. But evidence of vandalism was once again visible in some parts of the city.