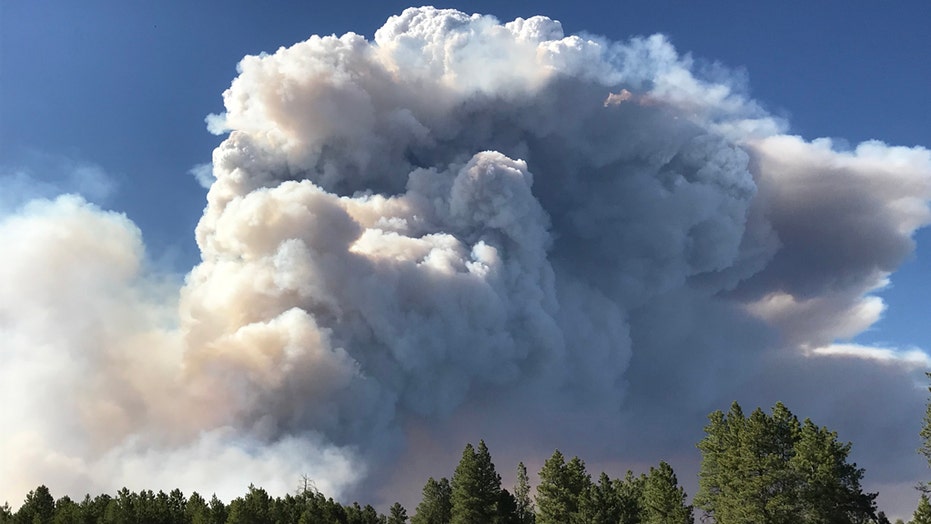 A portion of Grand Canyon National Park remains closed as a wildfire in Northern Arizona still burns through a national forest, as forecasters warn the weather this week will create more dangerous conditions.

The North Rim of the Grand Canyon has been closed since Friday after the blaze dubbed the Mangum Fire has consumed some 20,000 acres.

Officials said the fire is burning within the Kaibab National Forest, moving northeast, and not within the national park.

According to information made available by fire officials on Inciweb, the Magnum Fire has burned 24,000 acres of land as of Monday morning and it only 2 percent contained.

The Mangum Fire burning in northern Arizona has forced the closure of the North Rim of the Grand Canyon National Park. (Kaibab National Forest)

Four structures have been destroyed as a result of the fire, according to FOX10.

The Mangum Fire burning in northern Arizona has forced the closure of the North Rim of the Grand Canyon National Park. (Kaibab National Forest)

Some 392 personnel are battling the blaze, which pushed northeast towards Jacob Lake over the weekend, moving across highway 89A.

Satellite imagery showed the extent of the fire and smoke.

Video obtained by FOX13 over the weekend showed evacuees heading out of Jacob Lake as the wildfire burned through the area.

In the southern part of the state, fire officials on Sunday night asked residents near the Bighorn Fire in Pima County to begin preparations for potential evacuations.

The areas where residents were being asked to get ready Sunday night included Mount Lemmon, Mount Bigelow north of Organization Ridge Road, including Summerhaven.

The Bighorn Fire, which was sparked by lightning on June 5, has burned some 13,000 acres and is only about 22 percent contained, according to fire officials.

The Bighorn Fire moves along the western side of the Santa Catalina Mountains, Sunday, June 14, 2020, in Oro Valley, Ariz. (AP Photo/Ross D. Franklin)

Days ago, hundreds of Arizona residents under an evacuation notice were allowed to return home Friday but were told to remain ready to leave at a moment’s notice as the wildfire burns in a national forest near Tucson.

Firefighters are trying to keep the blaze in canyons and ridges and prevent it from moving downhill.

Evacuations are still in place in the Golder Ranch area and other areas have been warned to be ready to leave if the fire approaches.

The National Weather Service (NWS) has warned that critical fire conditions continue through at least the middle of the week, as hot, dry conditions and low humidity will allow the potential for fire to spread.

A red flag warning has been issued for the northern half of the state for Tuesday, as wind gusts of up to 45 mph will create "dangerous fire weather conditions."