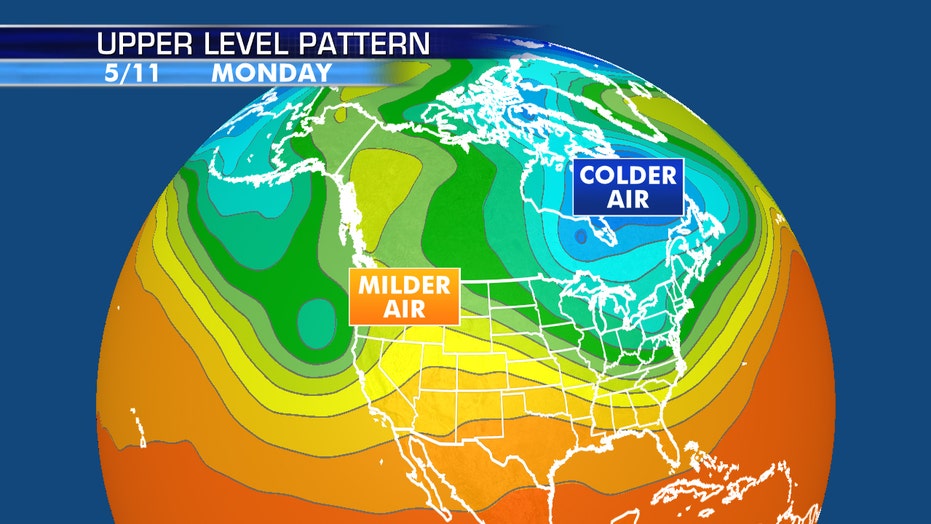 Over Mother's Day weekend, parts of New England received over 6 inches of snow, as cities across the Eastern U.S. woke up to record low temperatures.

All the while, Alaska had sunshine and near record-breaking high temperatures over the weekend, including an 82-degree temperature reading in Fairbanks on Sunday.

The National Weather Service (NWS) office in Fairbanks said Monday that the region saw its first 60, 70, and 80 degree days of 2020 all within the span of a week.

"Hopefully everyone has enjoyed the beautiful weather as much as we have!" the NWS office tweeted.

According to the forecast office, the warm week in Fairbanks was only the fourth time on record that the region had all of those firsts in the span of seven days.

So what's behind this recent stretch of warm weather in Alaska while the rest of the nation gets a chilly May?

During what has been a mostly mild winter, the polar vortex has remained at higher latitudes. This has resulted in much of the Eastern U.S. receiving well-below average snowfall.

As the polar vortex and the coldest air spilled into the eastern U.S., it made space for warmth to move up the West Coast into western Canada and Alaska.

This past weekend, that changed in time for Mother's Day.

As the polar vortex and the coldest air spilled into the Eastern U.S., it made space for a warm-up to move up the West Coast into Western Canada and Alaska.

While not as pronounced, this same pattern is continuing the first half of this week. Forecast highs in Fairbanks and Juneau are higher than most locations across the lower 48.

Warm conditions will continue in Alaska on Monday before the pattern changes and more seasonable conditions return. (Fox News)

"Oh by the way, today will be another dandy in Fairbanks, with highs in the upper 70's!" the NWS Fairbanks office tweeted Monday.

Forecasted highs in Fairbanks and Juneau are higher than most locations across the lower 48 on Monday. (Fox News)

The warm temperatures over the past week have also led to rapid snowmelt, with local forecasters warning of flood advisories in the Alaska interior.

This recent May heat in Alaska, however, is not the norm.

The polar vortex will retreat from the East Coast on Tuesday, settling back across Canada and Alaska.

The polar vortex will retreat from the East Coast by the end of the week, settling back across Canada and Alaska. (Fox News)

The ridge of heat across the West that stretched into Alaska will break down, returning to a more zonal pattern that keeps the cooler air up north.

For in the Eastern U.S., that means a return to more seasonal-type weather.

Adam Klotz currently serves as a meteorologist for FOX News Channel and FOX Business Network. He is based in New York City and joined the network in January 2017.