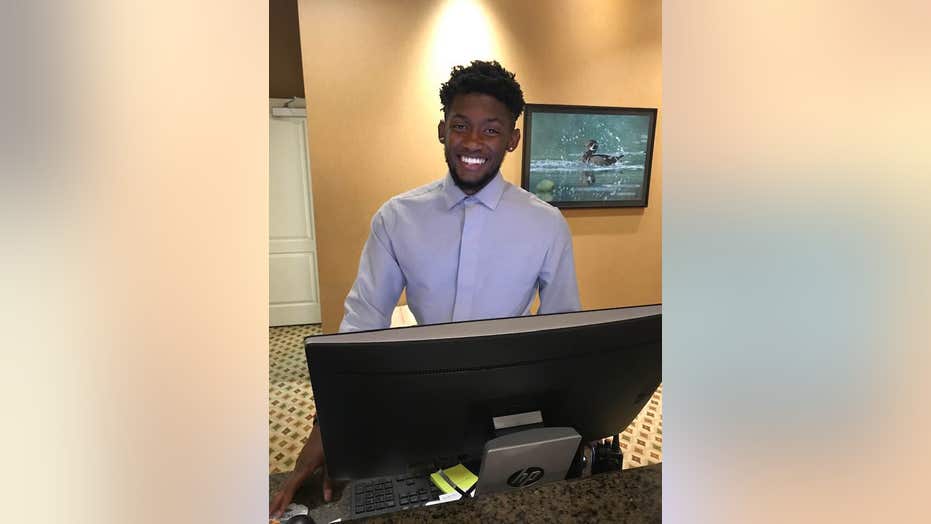 Hundreds of residents remain displaced from their homes.

A young hospitality worker in Texas is earning praise for running an entire hotel by himself after severe flooding caused by Tropical Storm Imelda left guests stranded inside the building.

Satchel Smith, a 21-year-old student at Lamar University, arrived for work at the Homewood Suites in Beaumont at 3 p.m. on Sept. 18, but rising floodwaters soon buried the access road – as well as a section of the I-10 – leaving Smith’s co-workers with no way to get to work.

SEE IT: BLACK BEAR GETS STUCK IN HOTEL'S WOMEN'S BATHROOM

Smith, however, proved to be prepared to step up to the challenge, and proceeded to make the hotel’s stranded guests comfortable in any way he could.

“Satchel has been here all night,” guest Angela Chandler wrote in a heartfelt post she shared to Facebook. “His coworkers couldn’t make it to work so he stayed. He has manned the phones, answered each of our questions, ensured that we have had a hot cup of coffee or tea, and helped serve us a hot breakfast.

”He has handled this situation with grace, kindness, and a beautiful smile on his face,” Chandler added.

Smith, who has been working at the Homewood Suites for about a year, said he first learned his co-worker couldn’t make it in for her night shift at around 7 p.m., according to KIDY.

"Then the morning came around, and I was the only one there and everyone was expecting breakfast," he said.

The stranded guests offered to help, too, with one volunteering to help him make breakfast while others washed dishes or cleaned the dining area. Amid the storm, some even offered to brave the elements to bring water bottles to stranded truck drivers nearby on the I-10.

"We also invited some people from other hotels to come eat because they didn’t have any food," Smith said, per KIDY, explaining that guests helped him cook dinner that evening, too.

When another employee finally came to relieve him from his duties, it was Friday, Sept. 20 — and Smith celebrated by taking a nap and then returning right back to work.

“If you know Satchel, tell him he is our hero!” Chandler wrote in her Facebook post. “What an example of how to handle yourself in a crisis! Goodness gracious!

“I will stay here next time just knowing that despite whatever happens, I will have someone putting our needs above his own needs. Thank you Satchel for taking care of us here at Homewood in Beaumont.”

The general manager of the hotel has also praised Smith’s actions.

"I wasn’t sure how he would take a crisis," said Alanna Hall, also the operations manager for the hotel, in a statement to USA Today. "But he has done a wonderful job."

Heavy rains and flash-flooding caused by Imelda have lead to the destruction of hundreds of homes. Five deaths have also been linked to the storm. (Jennifer Reynolds/The Galveston County Daily News via AP)

Severe flash flooding caused by Imelda first hit parts of east Texas on Thursday in Houston and the surrounding areas. Hundreds of homes and other buildings in the Houston area have been damaged by the waters. So far, authorities have also linked five deaths to the storm, believed to be one of the wettest tropical cyclones in U.S. history.