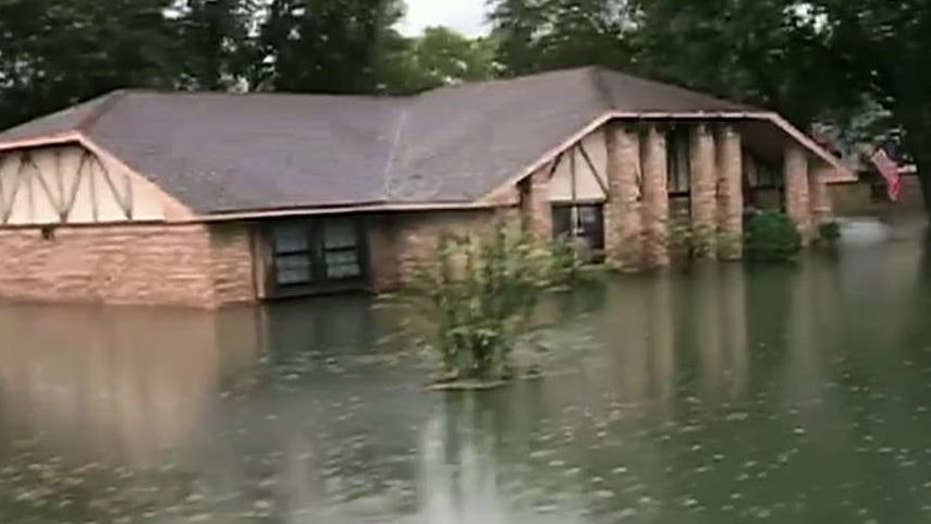 Hundreds of residents remain displaced from their homes.

A fifth death has been linked to the devastating east Texas floods produced by Tropical Storm Imelda, one of the wettest tropical cyclones in U.S. history.

Authorities say a 52-year-old Florida man was found dead Thursday in his stranded pickup truck along Interstate 10 near Beaumont, which is near Texas' border with Louisiana. Jefferson County spokeswoman Allison Getz said that although floodwaters seeped into Mark Dukaj's truck, investigators don't believe he drowned, though they do believe his death is storm-related. An autopsy will determine the cause.

A truck drives through a flooded highway as flooding from the remnants of Tropical Storm Imelda continues in Southeast Texas on Friday, Sept. 20, 2019, in Mauriceville, Texas. (Jon Shapley/Houston Chronicle via AP)

Hundreds of homes and other buildings in the Houston area have been damaged by the storm, bringing back unpleasant memories of Hurricane Harvey -- which dumped more than 50 inches of rain on the area two years ago. Imelda, the first named storm to impact the area since then, has deposited more than 40 inches of rain in some spots as it churned across a region extending east from Houston to the Louisiana border.

Texas Gov. Greg Abbott has already declared a state of disaster for the counties impacted by Imelda  and officials in Harris County, which is home to Houston, were trying to determine if millions of dollars in uninsured losses were enough to trigger a federal disaster declaration.

The heaviest rainfall had ended by Thursday night in Southeast Texas, but forecasters warned that parts of northeast Texas, Arkansas, Oklahoma and Louisiana could see flash flooding as Imelda's remnants shifted to the north.

Officials say two of the deaths from Imelda happened in the Houston area: an unidentified man in his 40s or 50s who drowned Thursday while driving a van through 8-foot-deep floodwaters and a man whose body was found in a ditch Friday and is believed to have drowned.

Mike Davis, left, and Trent Tipton, both line workers from Woodville, Texas, walk through floodwater to try to restore power for a customer on Friday, Sept. 20, 2019, in the Mauriceville, Texas, area. Floodwaters are starting to recede in most of the Houston area after the remnants of Tropical Storm Imelda flooded parts of Texas. ( Jon Shapley/Houston Chronicle via AP)

In Jefferson County, officials say a 19-year-old man drowned and was electrocuted Thursday while trying to move his horse to safety. Another man, 47-year-old Beaumont resident Malcolm Foster, was found dead inside his vehicle.

TROPICAL STORM IMELDA: 2 DEAD IN TEXAS, INCLUDING MAN TRYING TO SAVE HORSE FROM FLOOD

"The issue is that you can’t get 40 inches of rain in a 72-hour period and be fully prepared for that,” Jefferson County spokeswoman Allison Getz told The Associated Press. "At this point, we haven’t been able to fully assess what’s happened."

Stephen Gilbert, left, and his father-in-law sit in front of their flooded property on Friday, Sept. 20, 2019, in the Mauriceville, Texas, area. Floodwaters are starting to recede in most of the Houston area after the remnants of Tropical Storm Imelda flooded parts of Texas. "I'm on my third house," said Gilbert, who lives behind his father-in-law. "I wouldn't go anywhere else in the world," he said. "All we have is family anyway." (Jon Shapley/Houston Chronicle via AP)

A section of Interstate 10 just east of Houston remained closed Saturday after at least two runaway barges struck two bridges carrying eastbound and westbound traffic. Nearly 123,000 vehicles normally cross the bridges each day, according to the Texas Department of Transportation. The Coast Guard has said that witnesses reported early Friday that nine barges had broken away from their moorings at a shipyard.

"The current is really very strong right now so it's kind of pushed them up against the columns right now," she said.

Inspectors hope that the water will recede and the current will slow down enough for the barges to be removed this weekend so that a better assessment of the damage to the bridges can be made.