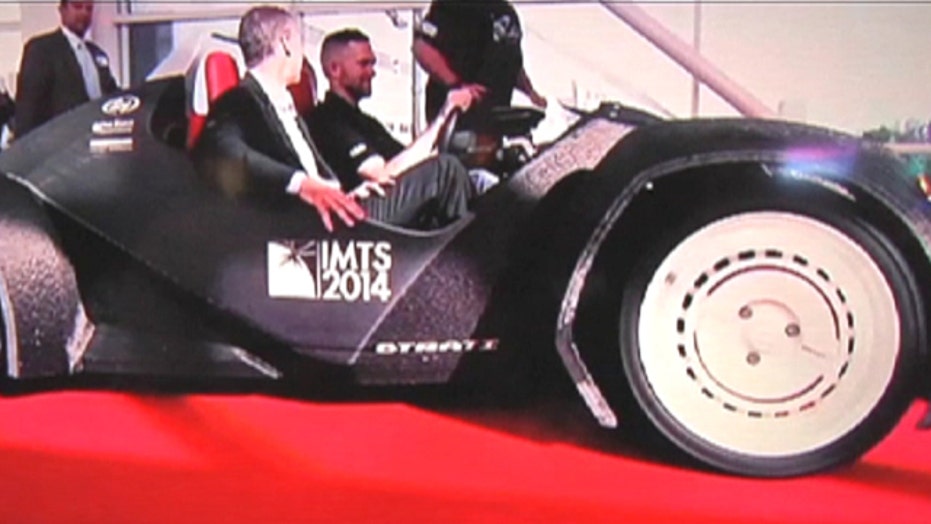 Would you drive a car made by a printer?

At first glance, the unique looking Strati-EV by Local Motors might appear to be another concept, energy-efficient car.

But the tiny two-seater is fully functional and is made of 95 percent printed material.

Arizona-Based Local Motors designs, prints and will sell the Strati-EV. The car isn’t street legal just yet but will sell for about $18,000. It can hit speeds of up to 50 miles per hour.

The electric car was created in about 45 hours by a 3D printer. Designers upload a layout and the printer creates it using thousands of layers of liquid plastic.

The 3D printer can create almost anything, like chairs and tables.

The car may look flimsy but the carbon-reinforced plastic is a strong as metal.

Local Motors says that its cars will be the safest on the road because the company can use them in real crash tests, then rebuild what didn’t work the next day.

That’s exactly what Local Motors did. But the company isn’t limited to just the Strati-EV model. Designers say they can basically print any type of car.

Local Motors says that, in the future, customers will be able to bring in their used printed car to be chopped up and recycled for a new one.

The business plans to build 50 new factories in the next 5 years and have its cars on the road even sooner.

“One of the key things we like to talk about, and it’s right in our name, is that we are local. We are made locally,” Rogers said. “And that’s so exciting when you think about bringing vehicle innovation from America all over the world.”