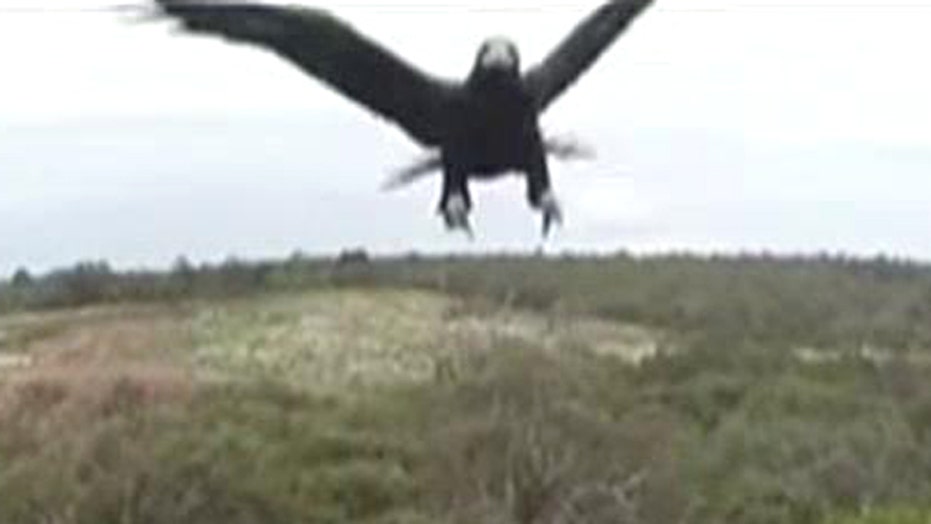 Keeping quadcopters away from restricted areas like airports or the homes of important politicians is a growing challenge facing officials everywhere, though after watching the video above they might want to hire a wedge-tailed eagle or two.

Drones are clearly no match for this particular bird of prey -- marvel how it seemingly comes from nowhere to spectacularly "talon punch" this particular camera-equipped flying machine from the sky.

The remotely controlled copter was being operated by Melbourne-based Adam Lancaster when the bird, seeing it as a threat or possibly as that day's dinner, came hurtling toward the drone, with the Australian powerless to do anything about it.

While the copter was sent crashing to the ground, the eagle fortunately came out of the high-speed encounter unhurt, Lancaster said on his YouTube page.

"Eagle was fine," he wrote. "She was massive, and used talons to punch the drone out of the sky. [It] hung around overhead so I got a really good look. Eagle's health was my main concern also."

Related: Man arrested after shooting down $1,800 drone with shotgun

He doesn't say which model of drone was taken down by the bird, but noted that it needed "some attention" before he could get it back in the sky.

And it's not only birds of prey that are willing to show quadcopters and their owners who's boss. Earlier this year we reported on a chimpanzee, which, taking unkindly to a drone flying over its enclosure at a zoo in the Netherlands, grabbed a large stick and whacked it out of the sky.

So does Lancaster have any advice for other drone operators? "Do not fly drones near birds of prey," he says, adding, "If you see a bird of prey while flying. Land."