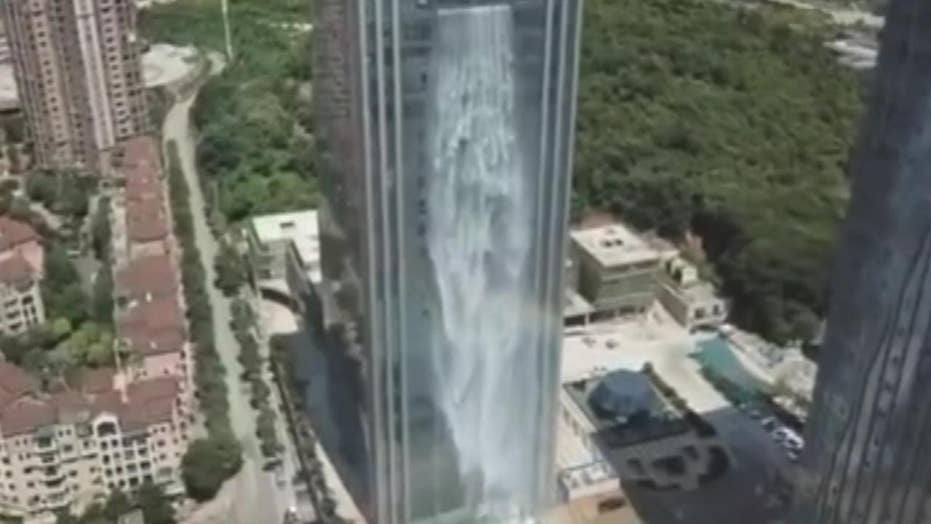 A skyscraper in Guiyang, China boasts a stunning waterfall.

It sounds like something out of sci-fi cityscape ─ a massive waterfall plunging 350-feet along the side of skyscraper ─ but in China it’s reality.

Residents of Guiyang thought something was wrong when they saw water cascading from the top of the Liebian building down to a public plaza in the city’s central business district.

And the bill is also supersized. The electricity needed to keep such a massive amount of water flowing costs about $118 per hour, according to The New York Post.

Because of that, the waterfall will only be turned on for special events for periods of 10 to 20 minutes, officials said.

“It’s quite novel,” one local told Kanka News. “If you do it on a hot day, it will feel very comfortable. It is still very eye-catching.”

The Liebian Building is southwest China features a waterfall on its side. (Ludiya Property Management Co)

Video footage of the waterfall shows a constant stream of water reflecting the sun’s light, while aerial images show the water flowing seamlessly out of the structure’s roof.

The Daily Mail reports that a large tank, installed at the base of the skyscraper, contains four 185-kilowatt pumps that lift the water to the top of the fall.

The waterfall is managed by Guizhou Ludiya Property Management Co. and is reportedly designed to be a tourist attraction.