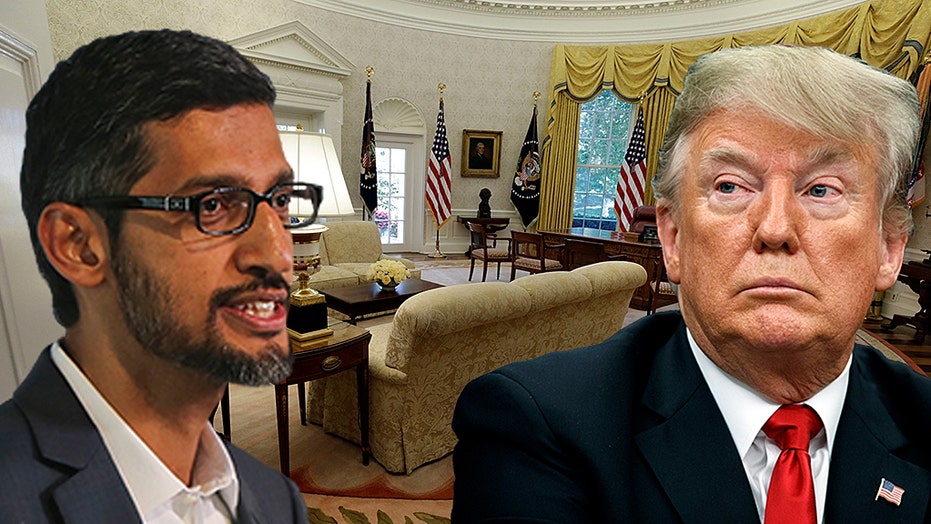 President Trump has slammed Google and its CEO Sundar Pichai in the wake of recent allegations of anti-conservative bias at the tech giant.

The president mentioned his recent meeting with Pichai in the Oval Office, adding that the Google chief "was working very hard to explain how much he liked me, what a great job the Administration is doing" and "that they didn’t help Crooked Hillary over me in the 2016 Election."

Trump said that Pichai told him that Google is "NOT planning to illegally subvert the 2020 election despite all that has been said to the contrary."

“It all sounded good until I watched Kevin Cernekee, a Google engineer, say terrible things about what they did in 2016," Trump added. He also referenced Cernekee's comments that the tech giant wants to make sure that Trump loses the 2020 election.

GOOGLE'S HISTORY OF CLASHING WITH CONSERVATIVES

“We are watching Google very closely!” the president added.

“The statements made by this disgruntled former employee are absolutely false," said a Google spokesperson, in a statement emailed to Fox News. "We go to great lengths to build our products and enforce our policies in ways that don't take political leanings into account. Distorting results for political purposes would harm our business and go against our mission of providing helpful content to all of our users.”

Google says that Cernekee was fired for multiple violations of company policies. This included using a personal device to conduct wide-scale unauthorized searches for and downloading of internal confidential company documents, Google told Fox News. The tech giant said that it obtained a judicial order that required him to return the confidential information.

Cernekee’s story was first reported by The Wall Street Journal.

The former Google engineer has also reportedly filed complaints with the National Labor Relations Board. Some of the complaints were denied, but the original is pending, according to The Journal.

The National Labor Relations Board declined to comment when contacted by Fox News.

Cernekee’s alleged posts on a Google internal listserv about white supremacist Richard Spencer and the Golden State Skinheads have also come under scrutiny recently. In an interview with the Daily Caller, the former Google engineer said he is the target of “false and baseless smears from a jealous and vindictive ex-colleague.”

In an op-ed posted on the Human Events website, Cernekee described himself as “an active participant in the nascent Free Speech movement at Google.” He said that “every American, from Communists to Nazis to everybody in between, deserves free speech so long as they are not advocating violence or breaking the law.”

“To that end, I occasionally defended the free speech of extremists, and I frequently spoke out against Antifa mobs who supported shutting down political expression through force,” he wrote. “When the infamous white nationalist leader Richard Spencer was sucker punched in the face during an interview, several Googlers openly defended the violent act and took to internal company forums to promote the idea that ‘Nazis deserve to be punched’.”

“While I strongly disagree with Spencer’s views, I found this precedent absolutely horrifying, and I spoke out,” he added. “I also spoke out against a masked gang of Antifa thugs who violently attacked a skinhead group. I would have unabashedly defended far-left activists if violent right wingers had attacked them.”

Fox News has reached out to Cernekee with a request for comment on this story.

Allegations of anti-conservative bias continue to swirl around Google. Republican lawmakers recently criticized Google during a Senate Judiciary Committee hearing into allegations of bias against conservatives and censorship of conservative groups on the company’s platforms.

Data from the Federal Election Commission compiled and analyzed by Recode, recently found that Google employees are donating heavily to Elizabeth Warren and Bernie Sanders. This is despite the fact both Democratic presidential candidates are calling for the breakup of Google's parent company, Alphabet.