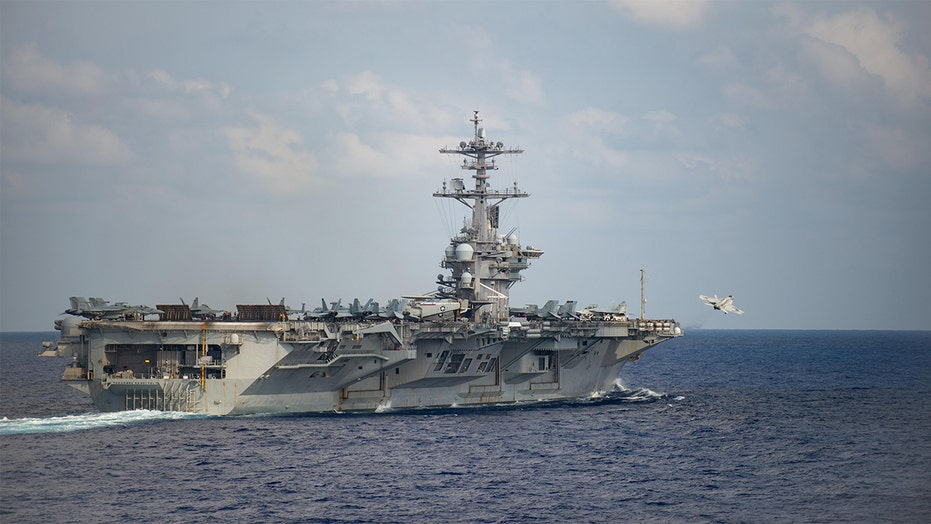 The U.S. Navy is now operating three aircraft carriers in the Pacific in what appears to be a strong show of force following Chinese movements and comments regarding Taiwan and the South China Sea.

The move, which includes the USS Theodore Roosevelt, USS Nimitz and USS Ronald Reagan, brings an unusually strong U.S. presence. This kind of message has not been seen in recent years, and it signals the fast-increasing significance of U.S. deterrence efforts regarding China. A report in the International Business Times states that a three-carrier mission has not happened in about three years. The development clearly seems to relate to recently increasing tensions between the U.S. and China regarding the coronavirus pandemic and Chinese maritime maneuvers regarding Taiwan and the South China Sea.

Chinese officials, according to a report in Beijing’s Global Times newspaper, cited China’s strong opposition to the movements, saying “China could counter it by holding military drills and showing its ability and determination to safeguard its territorial integrity.”

The Global Times, a Chinese-backed paper, also makes specific reference to China’s well known “carrier killer” DF-21D and DF-26 anti-ship missiles. Much has been discussed regarding these weapons, as they are regularly reported to operate with a range of 900 miles, a distance which some say could force U.S. carriers to operate at much farther standoff ranges. However, while there is possibly not very much known about the technical maturity and guidance systems of these weapons, Navy leaders have been clear that its carriers will operate “anywhere” needed in international waters.

This kind of scenario regularly invites debates, speculation and strategic discussion regarding the sustained functional utility of aircraft carriers. Navy studies consistently explore alternative configurations for future carriers to follow the first three or four Ford-class ships now in development. Perhaps the service will engineer smaller, faster, more agile carriers or continue to expand the use of carrier-launched drones with greater ranges.

At the same time, carriers are unlikely to go anywhere anytime soon for a number of reasons.

First, the reported range of these kinds of Chinese carrier killer missiles does not present as serious of a threat to closer-in carriers unless it has precision-guidance systems and an ability to hit moving targets. Also, while much is naturally not discussed for understandable security reasons, the U.S. Navy continues to rapidly advance new technologies improving its layered ship defense systems. Carriers regularly travel in strike groups, meaning they are defended by destroyers, cruisers and various airborne surveillance and attack assets.

Second, the Navy continues to make rapid strides arming its surface ships with new laser weapons and advanced EW systems likely to “jam” incoming missiles, stopping them, destroying their trajectory, or simply throwing them off course.

Furthermore, the Navy’s layered defense system not only includes new longer-range aerial, space and ship-based sensors, but deck-fired interceptors continue to receive software upgrades, making them far more accurate. For instance, the Navy’s SM-6 missiles and Evolved Sea Sparrow Missile Block II are now engineered with software and sensor upgrades that enable them to better discern and destroy approaching “moving targets.” SM-6 technical upgrades, for example, engineer a “dual-mode” seeker into the weapon itself, which enables it to better distinguish moving targets and adjust in flight to destroy them.

The ESSM Block II also has a sea-skimming mode that allows the interceptor to destroy approaching missiles flying parallel to the surface at lower altitudes. Some newer, advanced interceptors, by extension, no longer rely purely upon a ship-based illuminator but rather semi-autonomously receive electronic “pings” and make in-flight adjustments to destroy an approaching anti-ship missile.

New aerial sensors as well, such as advanced drones and the ISR-capable F-35C are likely to be successful in proving an “aerial node” surveillance asset able to help cue surface commanders of approaching missiles. They would also help ships attack and, in some instances, intercept or destroy an approaching anti-ship missile from the air. In fact, this very capability is already deployed by U.S. Navy destroyers; it is called Naval Integrated Fire Control-Counter Air. This is a system that uses an aerial node such as a Hawkeye surveillance plane or even F-35 to detect approaching threats from beyond the horizon, network with ship-based command and control, and enable a well-guided SM-6 interceptor missile to take out the approaching missile at long ranges.

What all of this means is that, despite Chinese claims that its carrier killer missiles make carriers “obsolete,” there does not seem to be much assurance that carrier groups could not successfully defend against them. This would be particularly true should carriers be flanked by well-armed DDG 51 destroyers. Perhaps these factors may be part of why U.S. Navy leaders continue to say its carriers can successfully operate wherever they need to.

Finally, successful intercept of 900-nautical mile anti-ship missiles may prove to be less pressing with the arrival of the carrier-launched MQ-25 Stingray refueler which, at very least, promises to nearly double the attack range of deck-launched fighters such as the F-35C and F/A-18 Super Hornet.