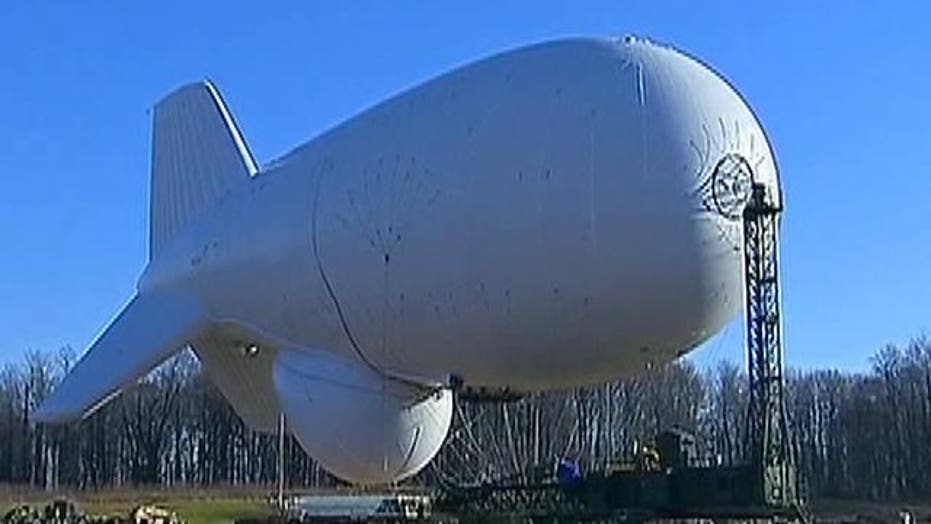 It looks like a blimp, but the tether technically means it is an aerostat.  This giant balloon-like device, the size of a football field, will soon keep watch over the nation's capital and a huge swath of the eastern seaboard.

JLENS, short for Joint Land Attack Cruise Missile Defense Elevated Netted Sensor, will float at an altitude of 10,000 feet, 24/7.  Military leaders say the radar onboard will allow them to monitor spots where the United States has potential security gaps.  "It's getting at an area where currently, you know, we have a risk," U.S. Army Major General Glenn Bramhall, Commander of the 263rd Army Air and Missile Defense Command, told Fox News.

A main selling point touted for JLENS - it will give commanders more time to make decisions, "You know that way, I don't have to worry about targets falling on the White House lawn," said Bramhall.

Its advantage is elevation - it can see over the horizon, an uninterrupted circle, 680 miles in diameter.  JLENS also acts as a deterrent.  "Obviously, JLENS is very visible and everyone's going to know it's there," said U.S. Army Captain Matt Villa, JLENS plans and coordination officer.

Based at Aberdeen Proving Ground in Maryland, it will feed information in real time to the North American Aerospace Defense Command (NORAD).

In an era of information-gathering controversies, like the one surrounding the National Security Agency (NSA), people might be worried about a surveillance blimp floating in their vicinity.  Military brass bent over backwards at a JLENS media event to put those fears to rest, "I can't stress enough, there are absolutely no cameras or video equipment on board the JLENS system.  Its radars cannot detect people. It does not store information," said Captain Villa.

"Well that's directly contradicted by the documents that we received," said Ginger McCall, Associate Director of Electronic Privacy Information Center (EPIC).  The independent non-profit research center filed a Freedom of Information Act (FOIA) suit to get more information on JLENS's capabilities.  McCall told Fox News, "because of the way things often work with mission creep, it would not be surprising at all if cameras were put on these devices in the future."

Low-flying cruise missiles are a growing concern.  "I'm going to use a dirty word, I'm going to say the word profile.  It's able to profile aircraft or objects that are flying through space," said Bramhall.  The system can also ascertain size and speed. "We can determine if this thing is a 757 or a Cessna, or if it's flying at 450 feet... then it is a cruise missile."

Chet Nagle, director on the Committee on Present Danger, echoes the missile threat. "There are lot of nations that will sell them to anyone who has money…they could put it on a ship for example, sail it a hundred miles off our coast and fire a cruise missile at the Capitol.

In the event of that worst case scenario, "the main goal here (for JLENS) is to be able to see it and that's the principal job of the aerostat is... to be able to detect it," said U.S. Army Lt. Col. William Pitts.  Leaders say even four or five minutes more notice adds up to a lot of time.

The operational exercise is expected to last three years.  It will test how well JLENS integrates with all other tools.  Lt. Col. Pitts added, "It's a great system. It's operated by great soldiers and they're doing a great job every day protecting the homeland."