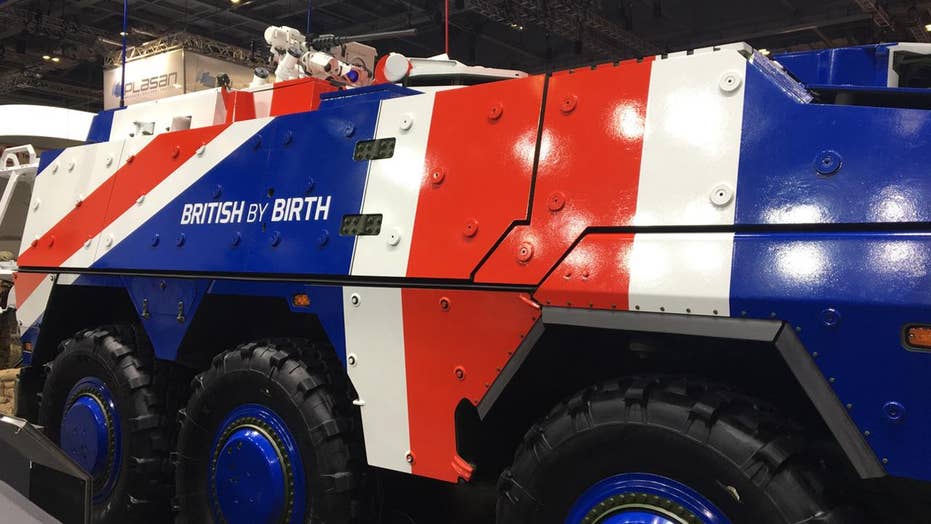 Fox Firepower: Allison Barrie gives an inside look at the top armored vehicles on display at D.S.E.I. in London: Rheinmettall Defense Boxer, the Patria AMV XP and the Rheinmetall Advanced Technology Demonstrator

Tanks and other armored vehicles showed up in full force at the largest military tech show on Earth - Defense and Security Equipment International (DSEI) last week.

All sorts of serious military vehicles from armored personnel carriers to special operations ATVs were all on show at the London event, which attracted more than 35,000 participants and thousands of military and government delegations.

At DSEI, there was a constant stream of participants taking photos of the Boxer in its red, white and blue paint job. It was given a “British by Birth” paint job because the U.K. was one of the countries involved in the development.

Made by Rheinmettall Defense, Boxer is an 8x8 Multi Role Armored Vehicle designed to take on ultra-tough terrain. It is currently in contention for selection as the U.K.’s new Mechanized Infantry Vehicle.

For maximum protection, Boxer has a special add-on composite armor. It can carry eight warfighters, as well as other tech, such as drones.

Despite weighing 36.5 tons with typical combat load, it can still reach speed of 64 mph with its 710 HP-MTU turbo diesel engine. Need more weight but still need the speed? Boxer can be adapted with a more powerful engine to cope with a 38.5-ton combat load.

DSEI: MEET THE MILITARY FAST ATTACK BOAT THAT SAILS ITSELF

It is highly mobile, whether on the road or on the toughest terrain.

This latest version, the Boxer A2, features a bunch of enhancements.

The smart modular chassis and mission module design means that the Boxer can be quickly adapted for other missions. According to Rheinmetall, it only takes about an hour to switch out mission modules.

In addition to an infantry vehicle, Boxer could also be used for other battlefield purposes. For example, it could be used as a mobile command post, for combat engineering or as a heavily protected field ambulance.

In the Armored Personnel Carrier role, Boxer would have features like a remote weapon station and a .50 M2 HB machine gun.

Armed to be a hard-hitting combat vehicle, Boxer can have a two-man Lance turret with an airburst capable 30mm MK-30/2 ABM automatic cannon.

The Germany Army has already purchased more than 400 Boxers and the Royal Netherlands Army bought 200. Lithuania has ordered 88.

The Combat Reconnaissance Vehicle version of the Boxer, enhanced with the Lance turret, is one of two finalists for the Australian Defence Force’s Land 400 Phase 2 procurement program.

PODCAST: Learn how to Drive like James Bond from this Special Forces Expert

Patria’s 32-ton armored personnel carrier hails from Finland, a country right on the doorstep of Russia.

Featured at DSEI, this is an 8x8 Armored Modular Vehicle XP, or AMV XP, that can carry 11 . The vehicle was some of a selfie ‘lightning rod’ at DSEI.

In addition to the driver, gunner and commander, the vehicle will transport eight additional warfighters, with protection against ballistic, mine and IED threats.

It can travel faster than 62 mph. There is a very large ramp at the rear of the vehicle, which warfighters can use to rapidly dismount.

The AMV XP has plenty of firepower that can be unleashed from within the safety of its armor.  The version shown at DSEI carried Javelin anti-tank guided weapons that could destroy enemy tanks. The Protector RWS brings four grenade launchers that can be directed from inside the vehicle using periscopes.

This armored personnel carrier also brings a nano-UAV – that’s a tiny drone. This one is the Black Hornet and it carries advanced tech that can provide an eye in the sky for those inside the carrier.

PODCAST: Get a lesson in flying a fighter jet with this fascinating pilot

Rheinmetall’s latest Leopard 2 upgrade tank made its debut at DSEI and also drew a lot of selfies.

Part of the Leopard Main Battle Tank Family, the Advanced Technology Demonstrator benefits from even more armor to protect the team inside.

For weapons, there is electric gun control tech and electrically operated grenade launchers. There’s also a new remote weapon system station. It still has the 120mm L44 smoothbore gun, but this could be swapped for other options.

There are also advances in “hard kill” defensive systems.

Rheinmetall is one of the two finalists for the British Army Challenger 2 Life Extension Program.