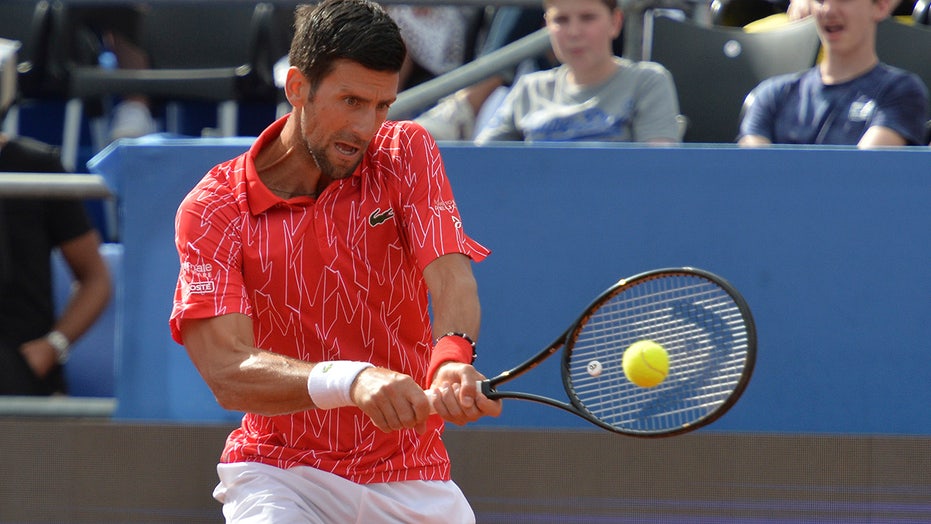 Novak Djokovic’s charity tennis exhibition series, combined with an overall softening of coronavirus restrictions in Serbia and Croatia, has been followed by an increase in the number of positive cases among professional athletes.

Two tennis players ranked among the top 40 in the world and five players at Serbia’s biggest soccer club have tested positive for the virus after being involved in sporting events where fans packed into the stands and social distancing was not enforced.

Djokovic, the top-ranked player in the world who previously said he was against taking a vaccine for the virus even if it became mandatory to travel, will now be tested as well, his media team said Monday.

”He is fine, he has no symptoms but nonetheless, he needs to do the test and then we will see what’s going on,” they said in a statement.

Djokovic was the face behind the Adria Tour, a series of exhibition events that started in Belgrade and moved to Zadar, Croatia, this weekend.

Croatian Prime Minister Andrej Plenkovic was among the spectators at the beach resort and will also be tested.

“I am really sorry for any harm I might have caused,” said Coric, who urged anyone who had contact with him to be tested.

That could be a lot of people. Coric, Djokovic and other players, including Marin Cilic, played basketball with a local team last week and posed together for photos.

Djokovic was supposed to play in the series final on Sunday, but that event was canceled.

Djokovic and Dimitrov also played in the Adria Tour’s opening exhibition a week earlier in Belgrade. Dominic Thiem and Alexander Zverev, who both played in the Serbian capital, said they would self-isolate despite negative tests.

“I deeply apologize to anyone that I have potentially put at risk by playing this tour,” Zverev wrote on Twitter.

The ATP Tour said in a statement it wished for a complete recovery for the players “and members of their staff who tested positive,” adding it has urged strict adherence to social distancing and health and safety guidelines.

In a separate incident, Serbian soccer club Red Star Belgrade said five of its players had tested positive for the virus.

Four of the players have displayed symptoms of COVID-19 while one has shown no symptoms, Red Star said.

The five players did not attend the team’s last match on Saturday but where there when Red Star played Partizan Belgrade in the Serbian Cup semifinals this month in front of about 20,000 fans. There was no social distancing and few wore face masks.

There has also been an increase in virus cases among soccer players in other countries, notably Russia.

The virus outbreak at the tennis event in Zadar could hurt Croatia’s attempts to restart its lucrative tourist trade, which draws in visitors from around Europe but has slowed sharply during the pandemic. Tourism supplied a quarter of the Croatian government’s revenue last year.

Croatian Interior Minister Davor Bozinovic said authorities have taken steps to protect the vulnerable groups in Zadar by stopping nursing home and hospital visits. He added that Croatia “currently has one of the most favorable situations in Europe” despite a spike in new cases that followed easing of lockdown measures. Croatia is scheduled to host a general election on July 5.

Neighboring Serbia held elections on Sunday. They were preceded by a loosening of lockdown measures, paving the way for the governing right-wing populist party to win a majority. It also made it possible for Djokovic to hold his first Adria Tour event in Serbia last week, and for Red Star to hold soccer games with packed, raucous crowds.

Djokovic’s decision to fly home to Serbia before being tested has also attracted scrutiny. Most other players at the Adria Tour stayed in Croatia for testing after Dimitrov’s positive test was announced and Sunday’s final between Djokovic and Andrey Rublev was called off.

The 2020 tennis season, like all sports, has been massively impacted by the pandemic. Wimbledon was originally supposed to start next week but has been canceled outright. The current plan is for Grand Slam tennis to return at the U.S. Open on Aug. 31, with a delayed French Open in September and October.

However, New York’s record as a city hit hard by the virus means some players were already skeptical. Top-ranked Ash Barty told The Associated Press this month she had “concerns” about going to the U.S. Open. Djokovic and Rafael Nadal also questioned restrictions on issues like players’ movements and their entourages.

“In planning for the resumption of the ATP Tour season from (Aug. 14), ATP and other stakeholders have made exhaustive plans to mitigate risks through a variety of precautions and protocols to be implemented at ATP events,” the tennis body said. “We continue to plan and adjust these precautions and protocols according to latest medical information and prioritize safety in assessing every decision.”