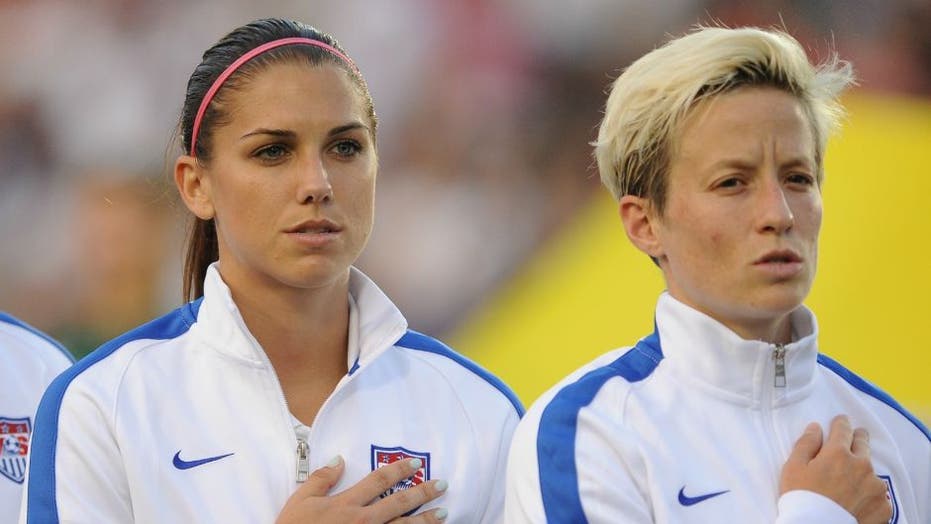 The U.S. Soccer Federation (USSF) is thinking about potentially doing away with its policy that requires national team players to stand during the national anthem, according to a report.

A possible repeal comes in the wake of nationwide protests of police brutality against African Americans following the death of George Floyd, who died while in police custody in Minnesota last month.

The federation's board of directors will meet on Tuesday to discuss the policy at the request of USSF president Cindy Parlow Cone, who helped the USWNT win the 1999 World Cup as a player -- with a vote likely occurring on Friday, according to ESPN.

Lauren Holiday, Alex Morgan, and Megan Rapinoe of the U.S. women's national team stand at attention during the National Anthem prior to their match against the Swiss women's national team at WakeMed Soccer Park on August 20, 2014, in Cary, North Carolina. (Photo by Lance King/Getty Images)

If the policy is voted to be repealed, it would take effect immediately. However, to become permanently adopted, it would still need to pass a vote at the annual general meeting scheduled for February or March next year.

The ruling was passed in 2017 and came after Megan Rapinoe was seen kneeling during the anthem before a game in 2016. She did so to show solidarity with Colin Kaepernick and bring attention to social injustice.

US SOCCER STAR MICHAEL BRADLEY SLAMS TRUMP IN WAKE OF PROTESTS: 'THERE ISN'T A MORAL BONE IN HIS BODY'

"It was a little nod to Kaepernick and everything that he's standing for right now. I think it's actually pretty disgusting the way he was treated and the way that a lot of the media has covered it and made it about something that it absolutely isn't," she said.

The rule states that all people representing a federation national team "shall stand respectfully during the playing of national anthems at any event in which the Federation is represented."

Rapinoe has continued to honor the policy since it was adopted, according to ESPN.

Many police officers across the U.S. have also kneeled and prayed in solidarity with protesters -- which they said represents how they are willing to listen to anger and frustration over police brutality.