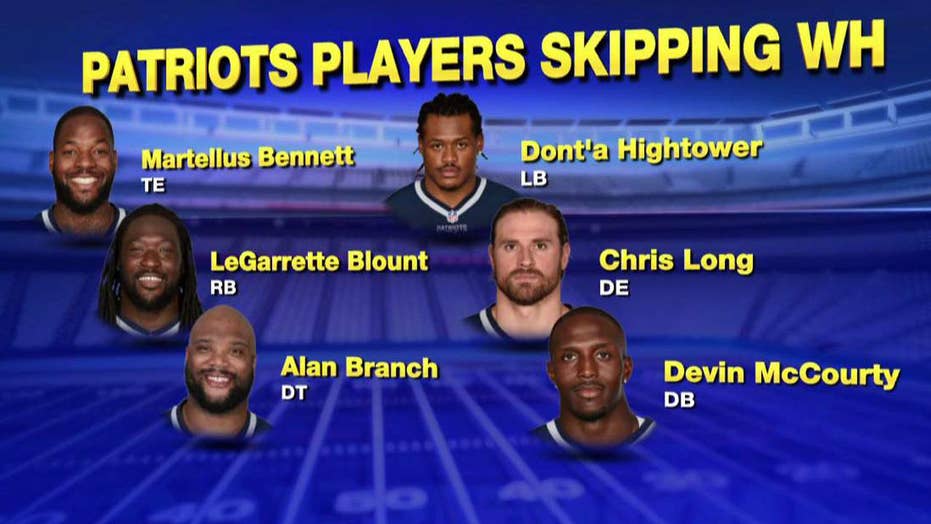 The New England Patriots are refusing to get caught in another controversy over crowd sizes.

The NFL team and President Donald Trump fired back at The New York Times for tweeting a photo on Wednesday that suggested there was a smaller turnout for this year's White House Super Bowl celebration, compared to the 2015 ceremony with former President Barack Obama.

The newspaper's sports Twitter handle posted the photos that were both taken in the south side of the White House. The picture with Trump showed both staircases empty while the 2015 photo with Obama appeared seemingly packed with players.

After the tweet was sent out, the Patriots replied back saying the comparison was misleading and lacked context.

The team shared a second photo comparing the Patriot's Super Bowl celebration with former President George W. Bush to the one with Trump. Thirty-six players attended in 2002.

UPDATE: Patriots say # of players was smaller this year than 2015 (34 vs. 50) but total delegation was roughly the same. pic.twitter.com/Ij77Def8z5

The New York Times sent out a correction minutes later, stating there were fewer players that came to the celebration this year -- 50 in 2015 versus 34 on Wednesday -- but that the total delegation was about the same.

Trump, who was entangled in a crowd size comparison for his inauguration, also blasted the The New York Times on Twitter Thursday for trying to start another controversy.

Failing @nytimes, which has been calling me wrong for two years, just got caught in a big lie concerning New England Patriots visit to W.H.

"Failing @nytimes, which has been calling me wrong for two years, just got caught in a big lie concerning New England Patriots visit to W.H.," the president wrote Thursday morning.

The Patriots were at the White House to celebrate their Super Bowl LI win. Superstar quarterback Tom Brady was among the players who did not attend the customary ceremony. Brady said in a statement he was not attending because of "some personal family matters," not because of Trump.

At least six players skipped the trip to D.C., some citing their absence as a protest to Trump's presidency.