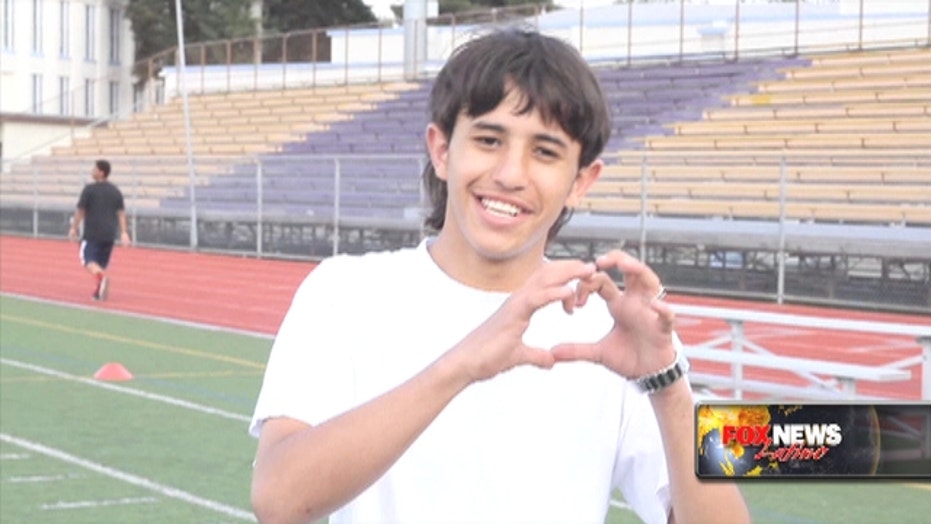 In the seven years since it's founding, Soccer Without Borders, it has grown nationally opening chapters in Baltimore, Boston, Chicago, Los Angeles and New York City.

Oakland, Calif. – When Abednego Juárez arrived at Oakland International High School two years ago at age 16, he spoke no English, only Spanish and his native K’iche,’ the ancient Mayan language spoken in rural Guatemala. His family had left for California after drug violence in their city, Huehuetenango, started to get out of control. Shootings and kidnappings were a daily occurrence in their neighborhood, so when members of the notorious cartel Los Zetas began demanding money from people with U.S. immigration status, they decided it was time to leave.

Juárez was used to being harassed and insulted because of his indigenous roots, so he was immediately skeptical when, once in the U.S., a boy his age approached him on his first day of school and asked him in Spanish if he wanted to play soccer.

“My family is a Mayan family and we are poor,” Juárez said. “Because we lived in the city, people who chose to speak only Spanish called us 'monkeys' and all that stuff, using racism and discrimination against us.”

The afternoon he was invited to play, a nervous Juárez joined dozens of other boys at a practice field after school. One of the boys offered to translate for him. Besides English, he heard several other languages for the first time — languages he had never even heard of. He was given cleats, socks, and shorts to play in.

Before practice started, the players circled up and the coach asked everyone to welcome Juárez. In that spirit, he was asked to tell everyone what country he was from and his favorite soccer team. He took a deep breath and spoke quietly through his translator. When he finished he was met with cheers and applause.

At every Soccer Without Borders practice, stories like Juárez’s are the norm. The players on the field are the sons and daughters of families from all over the world who have fled everything from poverty and discrimination to war and famine. Spanish, French, Nepali, Mandarin, Pashtun, Arabic and a host of other languages can all be heard on the field at the same time.

Juárez’s coach that first day, Ben Gucciardi, is who started the organization in 2007. A former college soccer player, he was invited to run a one-time soccer camp for a group of refugee children in Oakland. The camp became so popular he was asked if it was possible to make it full time. After partnering with Oakland International High School, Gucciardi was soon coaching newly arrived kids every day and Soccer Without Borders was born.

“Here in Oakland we work specifically with newcomer youth, so we work with refugee and immigrant youth who have arrived from 25 different countries around the world”, said Gucciardi. “A big part of what we’re doing is sort of using soccer as a way to engage the young people, but it’s a means to an end, not the end in itself.”

Gucciardi and his staff coach and mentor hundreds of boys and girls from ages 10 to 19. Often the students can’t afford their own gear, so Soccer Without Borders provides everything for them. Players are invited to cultural events, they volunteer locally, and must go to mandatory study sessions. The organization isn’t trying to produce elite soccer players. Its mission instead is to help newly arrived kids develop, integrate, and then give back to their new communities.

In its seven years of existence, Soccer Without Borders has grown nationally and today has chapters in Baltimore, Boston, Chicago, Los Angeles and New York City — all based on the Oakland model. The Los Angeles chapter is directed by former U.S. National team player John O’Brien, one of the first Americans to find success in the European big leagues with the legendary Dutch club AFC Ajax.

The organization’s success, however, is rooted in its ability to address a universal issue faced by every immigrant to the U.S. whether they’re from Mexico or Afghanistan — the challenge of integrating into American culture and society.

According to Carmelita Reyes, the principal of Oakland International High School, the transition for newly arrived children is exceptionally daunting. Soccer seems to speak a universal language.

The partnership between education and soccer is one that has paid off and Ben Gucciardi ultimately sees his organization’s own barometer in his players’ academic success.

“We’ve actually seen, over the last five years, [that] 95 percent of our kids who have participated in this program have graduated from high school," said Gucciardi. “You compare that to Oakland wide, [where] that’s closer to about 60 percent of students, and among newcomer youth it’s even a lower percentage in that.”

It’s been two years since Abednego Juárez arrived in Oakland. He’s no longer the shy nervous young man that attended practice for the first time that day. An outspoken advocate for his high school and the immigrant community, he’s received numerous awards, including a leadership award that recently sent him to Belgium for a week. He’s also, at 18, currently working three jobs to support his family.

Juárez graduates from high school this June and must decide where he’s going to college. He was accepted to UCLA, but was forced to turn it down because it was too expensive, even with financial aid. He also wants to stay closer to home to take care of his parents, both of whom have heart conditions.

No matter where he decides to attend, he says he wants to eventually become a lawyer so he can protect people that have faced discrimination like he has, including those in his native Guatemala.

“When I came to America I didn’t think I would succeed, but as President Abraham Lincoln said ‘I’m a slow walker, but I never walk back’," said Juárez. “And Soccer Without Borders has been a guide to keep me going and going to reach my goals and my dreams.”

While success in Soccer Without Borders is emphasized off the field, Juárez’s own team, the under-seventeen boys, finished second place this year in the Founders Cup, a California statewide tournament usually dominated by highly organized club teams with big budgets, not a mixture of refugee and immigrant kids with donated cleats and uniforms.

Gucciardi is happy when his kids succeed on the field, but winning to him isn’t everything. He believes Soccer Without Borders has a more universal message – soccer can be a vehicle for positive change.

“There’s something that speaks to people about this,” said Gucciardi. “[A] shared humanity and that’s expressed through soccer.”

Reinhard Cate is a freelance multi-media journalist based in San Francisco, CA. He's a master's graduate of the Arthur L. Carter Journalism Institute at New York University and his work has taken him across the world, with stints in Europe, Israel and the West Bank, and Afghanistan. He also currently teaches journalism part time at Santa Clara University. You can follow him on Twitter at @reinhardcate. Follow us on twitter.com/foxnewslatino
Like us at facebook.com/foxnewslatino