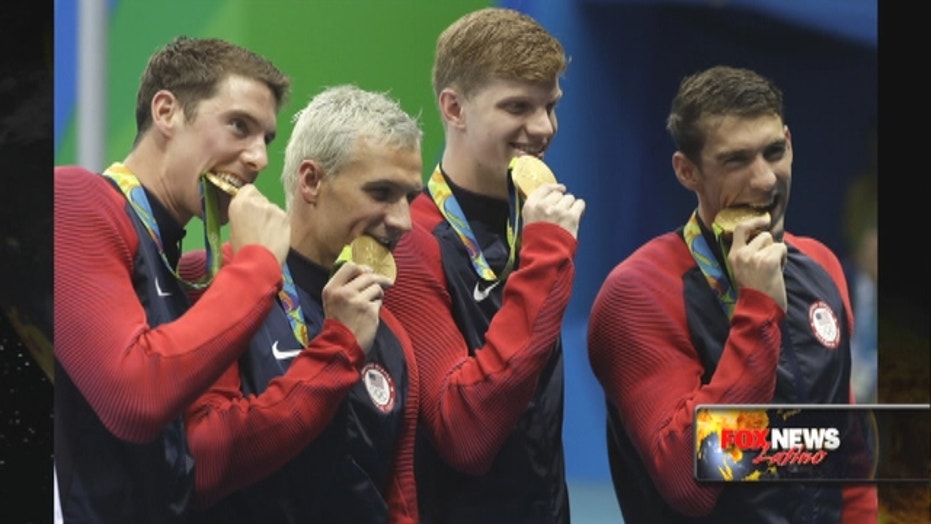 Lochte, 32, swam in third in the 4x200 freestyle relay Tuesday night behind Conor Dwyer and Townley Hass before handing off a commanding lead to Phelps, the most decorated athlete in Olympic history.

The swimmer, who is of Cuban and Spanish descent, said he was not particularly happy with his time on the third leg of the relay - it was the slowest of the four U.S. swimmers in the final - but it didn't matter much as the U.S. won by 2.47 seconds over Great Britain. Japan was third.

“My leg in particular, it wasn’t the best I’ve ever had,” Lochte said, according to the Charlotte Observer. “We had to do what we had to do and just get our hand on the wall first.”

Earlier in the day, Lochte kicked off his Olympic campaign in the fourth day of swimming competition – an unusual spot for the 12-time Olympic medalist – by anchoring the relay team made up of three other first-time Olympians: Clark Smith, Jack conger and Gunnar Bentz.

"It was rough because I love racing," he told reporters of waiting until Day Four of competition. "Sitting back in my room and just watching finals, I was like, 'Man, I can't wait until it's my time.' Now it's ours and I think we're just going to keep the ball rolling from what we've done the last two days."

Besides the relay, Lochte's only other event in Rio is the 200 individual medley which begins with heats early Wednesday afternoon with the finals Thursday night. It sets up a superstar showdown between him and Phelps – one of the most talked about ‘rivalries’ in the sport.

However, it was Phelps who hogged the spotlight on Tuesday night by also securing a gold medal – his 20th at the time – in the 200-meter butterfly. It was a victory that sent him climbing into the stands to kiss his 3-month-old son Boomer.

"That was probably one of my most challenging doubles," the 31-year-old Phelps said of swimming in two finals just an hour apart. "Doing a double like that is a lot harder than it once was."

The 200 fly was the one he really wanted, and it showed.

With challengers all around, Phelps simply wouldn't be denied. With his head nearly at the wall, he took one more stroke to make sure he got there first, his arms slamming against the timing pad.

That split-second decision got him to the wall ahead of everyone else, by a mere four-hundredths of a second.

When Phelps saw the "1'' by his name, he held up one finger. Then he sat on a lane rope, egging on the roaring crowd at the Olympic Aquatics Center with both hands, before emphatically pumping his fist.