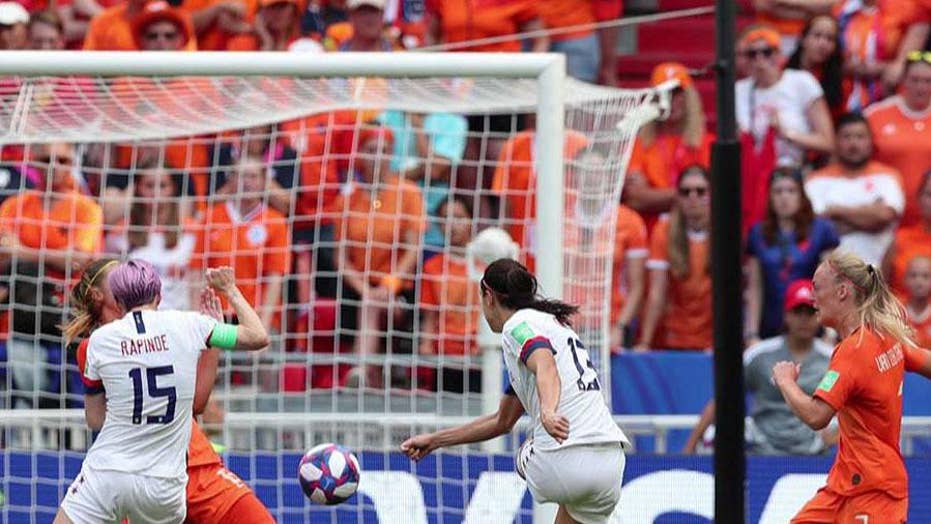 The Americans defeated the Dutch, 2-0, behind goals from Megan Rapinoe and Rose Lavelle. Rapinoe scored on a penalty kick in the 61st minute and Lavelle scored in the 69th minute.

It was a hard-fought battle between the U.S. and the Netherlands. The two squads were tied in the second half as it looked like the Dutch defense had the Americans’ number despite the heavy attack.

A foul was committed on Alex Morgan in the box and after a VAR review and an official review, the U.S. was awarded a penalty kick.

Minutes later, Lavelle turned up the pressure on the Dutch with some nifty footwork and a big boot to score the Americans’ second goal of the match.

The Netherlands played very tight defense in the first half. The Dutch had the odds on their side with the score tied at zero. The Netherlands had won all their World Cup matches after being tied at the half.

But that didn’t appear to be case.

Members of the US team celebrate at the end of the Women's World Cup final soccer match between US and The Netherlands at the Stade de Lyon in Decines, outside Lyon, France, Sunday, July 7, 2019. US won 2:0. (AP Photo/David Vincent)

The Netherlands managed five shots in the entire match – only one of them on goal. The offense was nearly nonexistent in the first half.

Lineth Beerensteyn may have had the best run of the game. She had an opportunity to put one past U.S. goalie Alyssa Naeher who came out of her box to challenge her. Naeher won the challenge and kicked the ball away from Beerensteyn.

The U.S. win marks a very controversial path to the World Cup final.

Going into the tournament, there were questions about coach Jill Ellis’ leadership as well as how Naeher was going to fill the shoes of former keeper Hope Solo.

Those questions were drowned out after the first match against Thailand – in which the Americans won 13-0. The U.S. was criticized for over-celebrating during the win. It set the tone of the entire tournament.

Between the criticism of the U.S. celebrating – which was amplified during their match against England – and the noise surrounding Rapinoe’s comments about the White House, the U.S. ultimately broke through and put on a great showing throughout the entire tournament.

The U.S. defeated Thailand, Chile and Sweden on the way to the knockout stage. Then got past Spain, France and England for their match against the Netherlands.

She and Michelle Akers are the only Americans to win the Golden Boot.

The win marks the fourth time the U.S. has won the Women's World Cup. Previously, the U.S. has defeated Norway, China, Japan and now the Netherlands. It’s also their second straight title, having defeated Japan in the 2015 game.