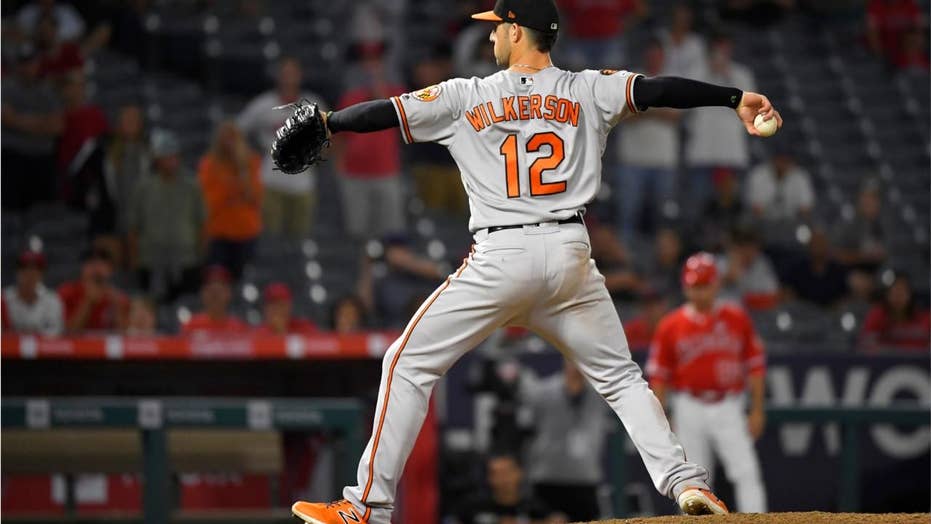 Baltimore came out on top of the Los Angeles Angels by a 10-8 score thanks to a two-run homer by Jonathan Villar in the top of the final frame. But it was what happened next that went into the record books. The Orioles, faced with a depleted relief corps, sent centerfielder Steve Wilkerson in to close out the game. Lobbing pitches that averaged just under 55 miles per hour, Wilkerson set the Angels down in order to record the Major Leagues' first save by a non-pitcher since the stat began being counted in 1969.

“I don’t think I’ve wrapped my head around it yet," Wilkerson said after the game. "What a wild game. That was just crazy. I’m glad I could go out there and be part of getting us a win.

“I did run up and get a pitching glove about the 13th inning or so," he added. "I know we were running thin on guys and we’d used Gaby and some of those other guys pretty recently, so I knew it was a possibility when the game was getting late. I think that was a gutsy performance by everybody.”

Wilkerson had appeared on the mound twice over the last month, both times in blowouts and in an effort to spare the Baltimore pitching staff. But Friday morning's appearance came with the game on the line. Fans could thank a generous strike zone and some unorthodox soft-tossing for the chance to finally go home. In the inning, Wilkerson retired Brian Goodwin, Kole Calhoun and future Hall of Famer Albert Pujols.

While Wilkerson's feat was a first, a handful of position players have been credited with victories in Major League games. Another Oriole player, first baseman Chris Davis got the victory against Boston on May 6, 2012. Yankees outfielder Rocky Colavito went two and two-thirds innings to get a win in a doubleheader in 1968. Catcher Brent Mayne of the Rockies earned a win against the Braves in 2000,  infielder Wilson Valdez won for the Phillies in 2011 and catcher John Baker of the Cubs got a win in 2014.