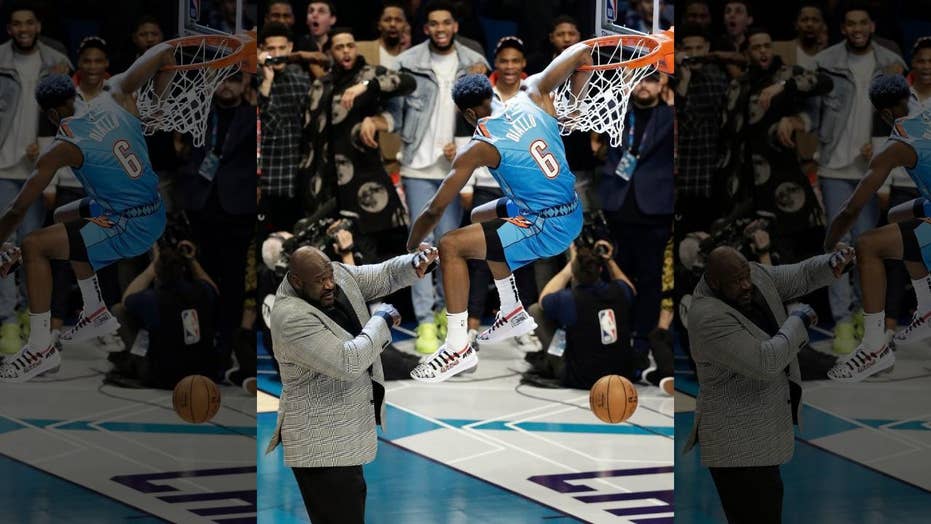 Oklahoma City's Hamidou Diallo pulled off a dunk that will be talked about for years to be crowned the NBA’s slam dunk champion.

The young Thunder star stole the show during All-Star Saturday Night, dunking over Hall of Famer Shaquille O'Neal, hanging on the rim by his elbow, then tearing open his jersey to reveal a "Superman" shirt underneath.

And his first dunk of the final round had the top of his head at basically rim level, putting him in control after New York's Dennis Smith Jr. failed to make a dunk in his debut try of the final.

Smith leapfrogged Miami's Dwyane Wade and took a lob from Stephen Curry to give himself a chance with his last dunk, getting a perfect score from the judges — and a round of boos from the crowd, many of whom weren't that impressed.

That left Diallo as the night's final participant. Diallo got rapper Quavo out of the crowd, put the ball in his hands, then grabbed it as he went airborne for the slam that sealed the title.

"Atmosphere was great," Diallo said. "Just came out and gave the crowd what it was looking for."

The other two competitors were Charlotte's Miles Bridges and Atlanta's John Collins.

Earlier in the night, Brooklyn's Joe Harris made all the shots at all the right times to deny Golden State's Stephen Curry a storybook ending in his hometown.

Harris made 12 straight shots in the final round and went a staggering 15 for 18 on moneyballs — the shots worth the most — to win the 3-point title. He finished with 26 of a possible 34 points in the final round, beating Curry by two. Sacramento's Buddy Hield was third with 19 final-round points.

"Obviously, it's incredible," Harris said. "Steph is the greatest shooter of all time. But, again, shooting off of the rack for a minute is not indicative of being a better shooter than Steph Curry. I don't want anybody to get it twisted at all."