Does NFL have proof of Myles Garrett racism claim?

With Myles Garrett's NFL suspension quickly upheld, Jared Max discusses if he will ever play again and if the NFL has audio proof of Garrett's claim of racism

Cleveland Browns defensive end Myles Garrett’s indefinite suspension was upheld by the NFL on Thursday and the official who made the decision wants social media to stop tweeting at him.

Garrett received the suspension for removing Pittsburgh Steelers quarterback Mason Rudolph’s helmet and hitting him with it during a game last week. Garrett reportedly said in his appeal hearing that Rudolph used a racial slur against him prior to the melee. The NFL said in a statement to the Cleveland Plain-Dealer that there was no evidence of the allegation and Rudolph strenuously denied it.

James Thrash, the appeals officer for on-field discipline, heard the case and made the decision to uphold the suspension. Thrash lashed out at the tweets he was receiving over the decision.

“Please stop tweeting me about the decision. This was a grueling process and the outcome is final. Player safety is what’s most important,” he wrote.

Thrash is a former NFL wide receiver who was appointed by the NFL and the NFL Players Association to the position in 2015. He is also the former teammate of NFL executive vice president of football operations Troy Vincent and NFL vice president of policy and rules administration Jon Runyan. 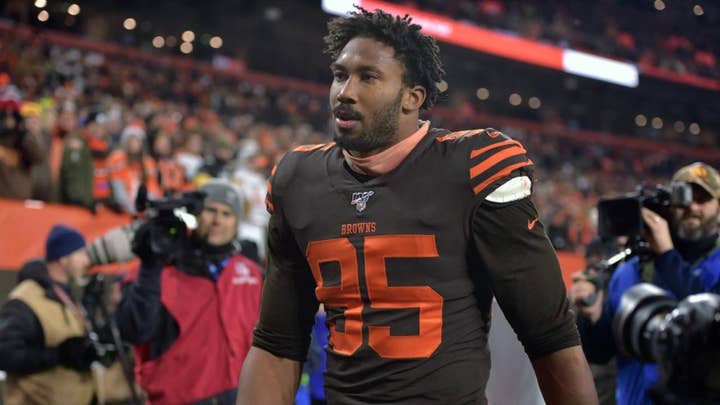 Garrett will now miss the rest of the Browns’ season and the playoffs should Cleveland make it. He will have to meet with commissioner Roger Goodell before reinstatement.

Garrett had apologized for his actions on the field but released a statement on the ruling saying he knew what he heard on the field that night.

"I was assured that the hearing was space that afforded the opportunity to speak openly and honestly about the incident that led to my suspension,” Garrett said. “This was not meant for public dissemination, or was it a convenient attempt to justify my actions or restore my image in the eyes of those I disappointed.

“I know what I heard. Whether my opponent’s comment was born out of frustration or ignorance, I cannot say. But his actions do not excuse my lack of restraint in the moment, and I truly regret the impact this has had on the league, the Browns and our devoted fans.”