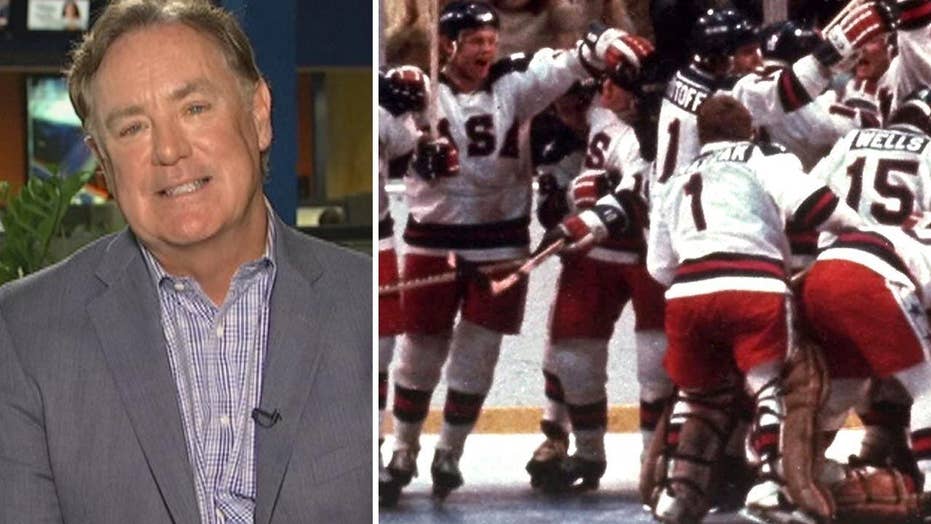 On 'Your World,' Jim Craig hopes to garner more than $5 million at auction

NEW YORK – The American flag that goalie Jim Craig wrapped around his shoulders after the U.S. Miracle on Ice victory at the 1980 Lake Placid Winter Olympics is on the auction block.

The flag is one of 19 items in ''The Jim Craig `Miracle on Ice' Collection,'' which also includes Craig's Olympic gold medal, the jersey he wore against the vaunted Soviet Union and in the gold-medal win against Finland. Also included are the only mask Craig wore during the Winter Games, his skates and goalie equipment, and the goalie sticks from the games against the Soviets and Finland.

Asking price for the collection is $5.7 million. The items are on display through Sunday at the National Sports Collectors Convention in Chicago.

One of the centerpieces of the collection is the flag Craig draped over his shoulders as he skated around the rink searching the stands for his father after the Finland game. The image is well-known in American sports history and the flag is valued at $1 million to $1.5 million. The price of the gold medal is pegged between $1.5 million and $2 million.

Craig joins former U.S. teammate Mike Eruzione, who auctioned several Olympic items just over two years ago, including the jersey he was wearing in the Soviet game. Eruzione, who scored the game-winning goal in that game, netted around $1.5 million and said he sold the Olympic items to benefit his three adult children and a grandson, along with the Winthrop Foundation, which finances charities in his hometown of Winthrop, Mass., just outside Boston.

Craig said he decided to sell the items ''so my children and grandchildren will be financially secure in the future.'' Craig, who has made a living as a motivational speaker, has a 26-year-old son and 24-year-old daughter.

''Over the years, I've loaned my Olympic memorabilia to museums and other venues so it could be accessible to fans to enjoy,'' Craig said. ''It is my hope that whoever purchases this will do the same.''

Proceeds from the sale also will benefit several charities that Craig supports.

The U.S. victory by a bunch of fuzzy-faced college kids over one of the best teams in hockey history is one of the great moments in American sports history.