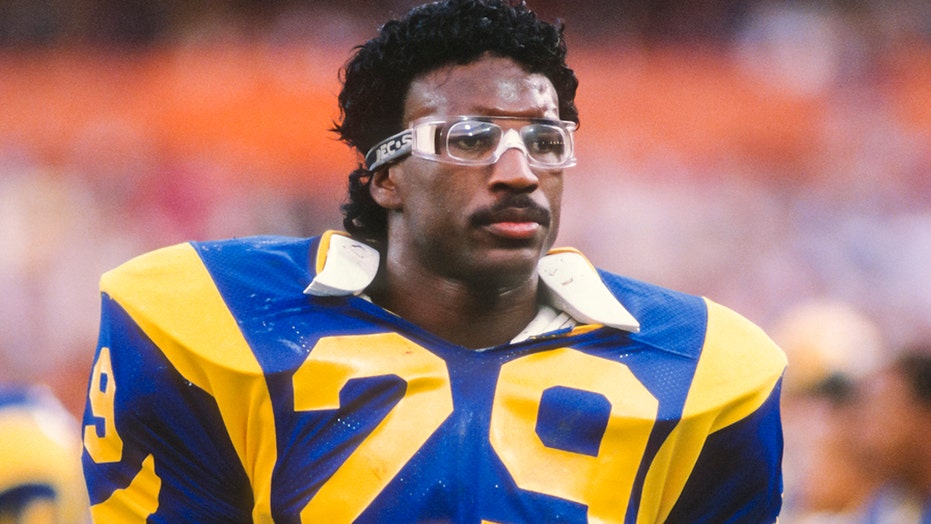 The Los Angeles Rams are one of the greatest franchises in NFL history.

Originally, the team began as the Cleveland Rams in 1936 before relocating to Los Angeles 10 years later. After the 1994 NFL season, the franchise moved to St. Louis until the end of 2015, when it went back to Los Angeles.

Over the course of their existence, the Rams have had some all-time great players, including Isaac Bruce, Torry Holt, Deacon Jones, Jack Youngblood, Merlin Olsen, Jackie Slater, Kurt Warner, Marshall Faulk, Eric Dickerson, and a host of others. Even current defensive tackle Aaron Donald would be a potential candidate for the Rams' Mount Rushmore.

But when it comes down to the best of the best, which players can line up on the Mount Rushmore of Rams? Read below for a list of the four greatest players in franchise history.

Deacon Jones is one of the best players in franchise history. (Photo by Focus on Sport/Getty Images)

Deacon Jones, inducted into the Pro Football Hall of Fame in 1980, is regarded as one of the best defensive players in NFL history.

Jones was an eight-time Pro Bowler, five-time first-team All-Pro, three-time second-team All-Pro, and a two-time NFL Defensive Player of the Year (1967 and 1968). Sacks weren't an official stat during Jones' playing days, but Pro Football Weekly once reported that he unofficially had 173 1/2 sacks over his career, which would have been third on the all-time sack list.

Eric Dickerson is one of the best running backs in the history of the NFL. (Photo by David Madison/Getty Images)

Eric Dickerson spent 11 seasons in the NFL, and he is recognized as one of the greatest running backs in league history. Dickerson was a six-time Pro Bowler, five-time first-team All-Pro, the NFL Offensive Player of the Year in 1986, and he led the NFL in rushing yards four times (1983, 1984, 1986 and 1988).

Dickerson, a member of the 1980's All-Decade Team, was also a part of the NFL's 100th Anniversary All-Time Team. He was inducted into the Pro Football Hall of Fame in 1999, and his No. 29 jersey is retired by the Rams.

Merlin Olsen played for the Rams from 1962-76. (Photo by Focus on Sport/Getty Images)

Merlin Olsen spent his entire 15-year career with the Rams. Olsen was selected to the Pro Bowl 14 straight times, which is an NFL record. The only other players in league history selected to 14 Pro Bowls are Bruce Matthews, Tony Gonzalez, Tom Brady, and Peyton Manning.

Olsen was also a five-time first-team All-Pro and five-time second-team All-Pro. The NFL Rookie of the Year in 1962, Olsen was a member of the 1960's and 1970's All-Decade Teams. He was also recognized on the 75th and 100th Anniversary All-Time Teams. Olsen was inducted into the Pro Football Hall of Fame in 1982.

Marshall Faulk, a key member of the "Greatest Show on Turf," was a part of the Rams' only Super Bowl championship, when they defeated the Tennessee Titans in Super Bowl XXXIV. Faulk was a seven-time Pro Bowler, and six-time All-Pro, which included three first-team selections.

The Rams retired Faulk's No. 28 jersey, and the Indianapolis Colts inducted him into their Ring of Honor after a successful stint with the team from 1994 to 1998.