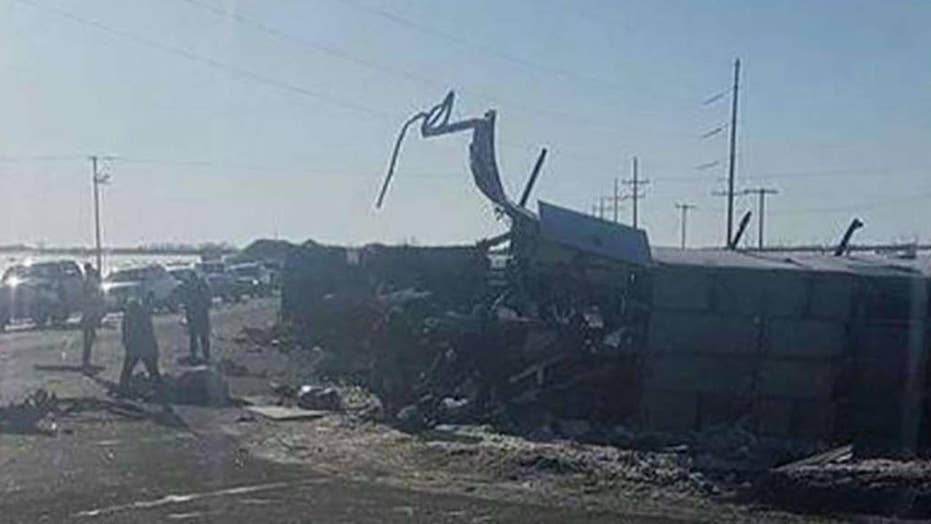 14 people were killed after a bus carrying a junior hockey team collided with a truck; Bryan Llenas shares latest details.

The family of a Humbolt Broncos hockey player who was on a bus when it slammed into a semitrailer in western Canada-- killing 15-- said he was taken off life support and his organs will be donated, The Global News reported.

Logan Boulet, 21, a defenseman, was put on life-support on Saturday and his family said his organs would be harvested and six matches have been found.

“Logan made it clear previously that he signed his donor card as soon as he turned 21,” the family said in a statement. Even in his eventual passing, he will be a selfless hero.”

The Calgary Herald reported that a friend of the family said the procedures were set to begin early Sunday and matches were made for all vital organs. One patient will receive his heart and lungs, the report said.

The bus had 29 passengers, including the driver, when it crashed at about 5 p.m. Friday on Highway 35, police said. Among the dead are Broncos head coach Darcy Haugan, team captain Logan Schatz and radio announcer Tyler Bieber.

Fourteen were also injured, some critically, in a collision that left a country, its national sport and the hockey-obsessed town of Humboldt, Saskatchewan, reeling.

Photographs of the wreckage showed the twisted trailer with most of its wheels in the air and the bus on its side with its back portion destroyed. The force of the crash sent both vehicles into the ditch at the northwest corner of the intersection.

Residents of the town of less than 6,000 have been leaving flowers, team jerseys and personal tributes on the steps of the arena’s entrance, forming a makeshift memorial.

While most of the players were from elsewhere in western Canada, they were put up by families in the small town of Humboldt.

Forward Logan Hunter and defensemen Stephen Wack and Adam Herold also were among the dead, according to family members and others. Assistant coach Mark Cross, bus driver Glen Doerksen and stats keeper Brody Hinz, who was 18, were also killed.

The names of all the dead and injured have not been released by police.

The Broncos are a close-knit team who dyed their hair blond for the playoffs. The bus was driving the team to a crucial playoff game Friday against the Nipawin Hawks.

“We’re devastated,” said hockey club Vice President Randolph MacLean. “At the center of this, we have 15 souls who’ll never go home again. We have 29 lives that will never be the same.”

EDITOR'S NOTE: Officials initially identified Xavier Labelle as one of the passengers who died. On Monday, the Ministry of Justice for Saskatchewan said the body of Parker Tobin was identified mistakenly as Labelle, who was injured in the crash but survived.