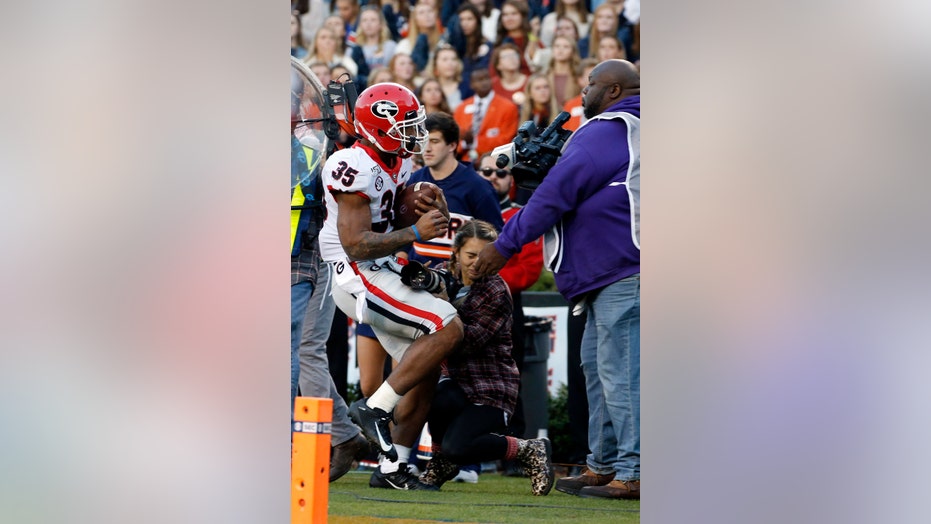 A photographer was hospitalized Saturday after she was briefly knocked unconscious with a brutal accidental hit by Georgia Bulldogs running back Brian Herrian during their game against Auburn.

Georgia said in a statement that Chamberlain Smith, a photography intern for the university's Athletic Association, was taken to East Alabama Medical Center in nearby Opelika for treatment. It did not specify what her injury was.

Smith was kneeling down to take a picture late in the second quarter when Herrien was forced out of bounds in front of her. She appeared to get hit in the head by Herrien's knee.

The game was stopped for several minutes while Smith received treatment from medical personnel. The CBS broadcast showed Smith opening her eyes as she was placed on a stretcher and she appeared to be conscious as she was taken out of Jordan-Hare Stadium.

Georgia, who is No. 4 in the College Football Playoff rankings, defeated Auburn 21-14 to clinch the SEC East title and keep their hopes of a national championship alive.

Georgia running back Brian Herrien (35) runs out of bounds and into a photographer during the first half of an NCAA college football game against Auburn, Saturday, Nov. 16, 2019, in Auburn, Ala. (AP Photo/Butch Dill)

“It was really a scary moment,” Smart said. “Brian felt very sick about it. It was a tough deal, but hopefully she’s going to be OK. I think she is.”