Kareem Hunt was a third-round pick by the Chiefs in 2017. (Photo by Jason Hanna/Getty Images )

CLEVELAND – The Cleveland Browns have signed Kareem Hunt, who was released two months ago by Kansas City after a video surfaced showing the star running back pushing and kicking a woman.

Hunt was placed on the NFL's commissioner's exempt list hours before the Chiefs released him, a move that drew public support after he was seen in a physical altercation with the woman last February during an argument in the lobby of a downtown hotel where he stayed.

Hunt was in his second season with Kansas City and was one of the team's best players. He led the NFL in rushing as a rookie in 2017.

The Browns are now giving the 23-year-old, who is from Cleveland, a chance to restart his career. 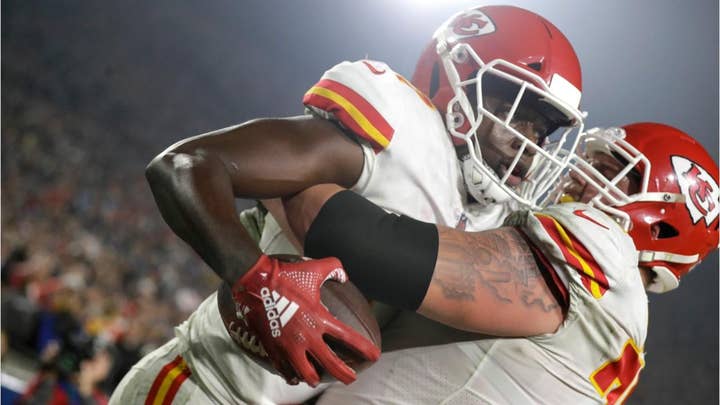 Hunt still could be suspended by the league under its personal conduct policy for the incident and two others that surfaced after he was released by the Chiefs. An NFL investigation is ongoing.

Although Hunt has not been charged with a crime, he could still face a lengthy suspension from the league pending its inquiry.

Browns general manager John Dorsey drafted Hunt while working for Kansas City, and said their relationship was an "important part of this decision-making process."

"But we then did extensive due diligence with many individuals, including clinical professionals, to have a better understanding of the person he is today and whether it was prudent to sign him," said Dorsey, who was Kansas City's GM from 2013-16. "There were two important factors: one is that Kareem took full responsibility for his egregious actions and showed true remorse and secondly, just as importantly, he is undergoing and is committed to necessary professional treatment and a plan that has been clearly laid out."

Dorsey went on to say the Browns "fully understand and respect the complexity of questions and issues in signing a player with Kareem's history and do not condone his actions. Given what we know about Kareem through our extensive research, we believe he deserves a second chance but certainly with the understanding that he has to go through critical and essential steps to become a performing member of this organization, aside from what the NFL determines from their ongoing investigation."

Dorsey added that the Browns have given Hunt "detailed plans with expectations laid out that he understands and must follow."

He said any similar incident will not be tolerated.

In a statement released by the team, Hunt expressed remorse and thanked the Browns for giving him the opportunity.

"First off, I would like to once again apologize for my actions last year," Hunt said. "What I did was wrong and inexcusable. That is not the man I was raised to be, and I've learned a great deal from that experience and certainly should have been more truthful about it after the fact. I'm extremely grateful that John Dorsey, Dee and Jimmy Haslam and the Cleveland Browns organization are granting me the opportunity to earn their trust and represent their organization in the best way possible on and off the field.

"I am committed to following the necessary steps to learn and to be a better and healthier person from this situation. I also understand the expectations that the Browns have clearly laid out and that I have to earn my way back to the NFL. I'm a work in progress as a person, but I'm committed to taking advantage of the support systems that I have in place to become the best and healthier version of myself."

Hunt's incident is one of the more high-profile assault cases to plague the league in recent years.

In 2014, Baltimore Ravens running back Ray Rice was captured on video punching and knocking out his then-fiancee in an elevator. He was released by the team and never returned to the NFL.

The Browns will likely receive backlash for their decision to sign Hunt. The team is coming off a tumultuous 7-8-1 season, which included a midseason coaching change as Hue Jackson was fired after going 1-31 in two seasons. Cleveland recently hired Freddie Kitchens as its new coach.

Kitchens served as the team's interim offensive coordinator for the final eight games, and his strong connection with rookie quarterback Baker Mayfield was one of the main reasons he got the job.

Hunt, of course, could wind up with a suspension for a portion of the 2019 season. A player who is placed on the exempt list may not practice or attend games, but with the team's permission may be present at its facility on "a reasonable basis for meetings, individual workouts, therapy and rehabilitation, and other permitted non-football activities."