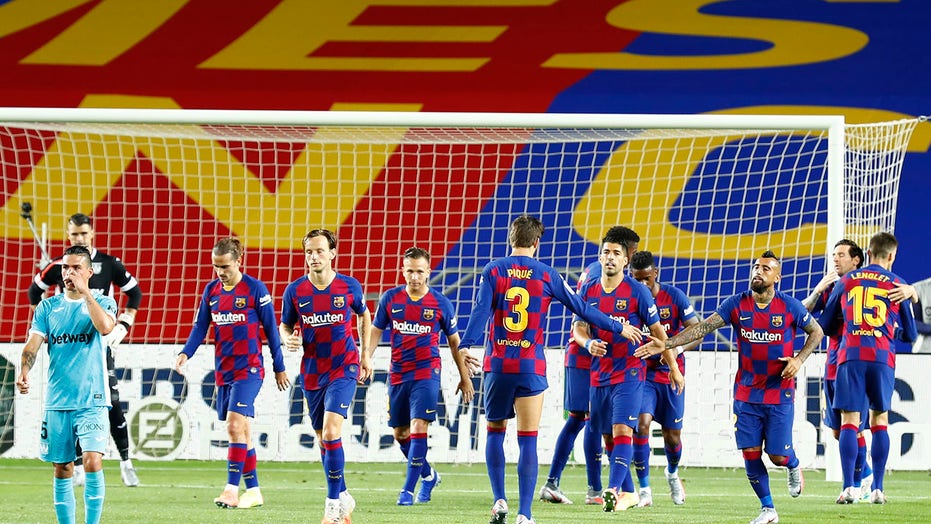 The Champions League will finish with a mini-tournament in Lisbon, restarting in August after a five-month suspension caused by the coronavirus pandemic.

Eight teams will play from the quarterfinals in knockout games at two venues over 12 days, the UEFA executive committee decided Wednesday.

The final will be held at the home stadium of Portuguese club Benfica on Sunday, Aug. 23 — the latest date in the competition's 65-year history.

UEFA will decide next month if fans can attend the games. Currently, games in Europe's most prestigious leagues are being played without fans.

“We don’t know if only the local fans, or no fans, or fans from different clubs could travel to the venues (in Portugal),” UEFA president Aleksander Ceferin said.

The unprecedented solution also sees the Ataturk Olympic Stadium in Istanbul — the originally scheduled host for the final — pushed back by one year. Future finals hosts St. Petersburg, Russia, Munich, Germany, and London will also take their turn one year later.

Portugal's public authorities and health officials can have the final say if the Champions League, potentially also including some outstanding round of 16 games, can come to the nation of more than 10 million people, which has reported more than 1,500 deaths related to COVID-19.

“For now there is no reason to have a Plan B,” Ceferin said.

Portuguese federation president Fernando Gomes, who is also a UEFA vice president, said the European body “showed that it trusts the Portuguese. It trusts the government, the federation, the clubs and the people.”

The Europa League will also get a knockout tournament. It will be played in four stadiums in western Germany starting Aug. 10.

Cologne is set to host the final on Friday, Aug. 21. It was originally scheduled to be on May 27 in Gdansk. The Polish city will host the 2021 final.

Both competitions have yet to complete their quarterfinal line-ups with round of 16 games halted. Venues for those games in early August were not decided Wednesday, though could be moved to Portugal and Germany.

The Champions League had four second-leg games postponed in March at Barcelona, Bayern Munich, Juventus and Manchester City. Those clubs all want to host the return games on the Aug. 7-8 dates allocated, UEFA said. Stadiums in Porto and Guimarães are on standby.

In the Europa League, only six of eight first-leg games in the round of 16 were played. Single games have been ordered for Inter Milan-Getafe and Roma-Sevilla, which are likely to be in Germany on the Aug. 5-6 dates allocated.

UEFA competitions are scheduled to restart after the completion deadline for domestic leagues and cups on Aug. 3. They were given priority to stabilize clubs and the European soccer economy and decide entries to next season's qualifying rounds, which begin on Aug. 8 in the Champions League.

UEFA said next season's group stages will begin one month later than usual — on Oct. 20 in the Champions League and Oct. 22 in the Europa League. The draws will be made on Oct. 1-2 in Athens, instead of the usual venue Monaco.

The women's Champions League also has an eight-team knockout bracket, from Aug. 21-30 in the Basque region of Spain. The final will be at San Sebastián, and Bilbao is the other venue picked.

Bilbao was also confirmed among the host cities for the European Championship postponed until June 2021. It was widely speculated in Spanish media that Bilbao would drop out.

UEFA's biggest decision during the shutdown was postponing Euro 2020 for one year. All 12 host cities, in 12 countries, were reconfirmed Wednesday to stage their games.

UEFA confirmed Wednesday the Nations League group stage will remain in its September-to-November slot, though it is unclear when the Final Four mini-tournament to crown a champion will be played. Its June 2021 slot was taken by Euro 2020.