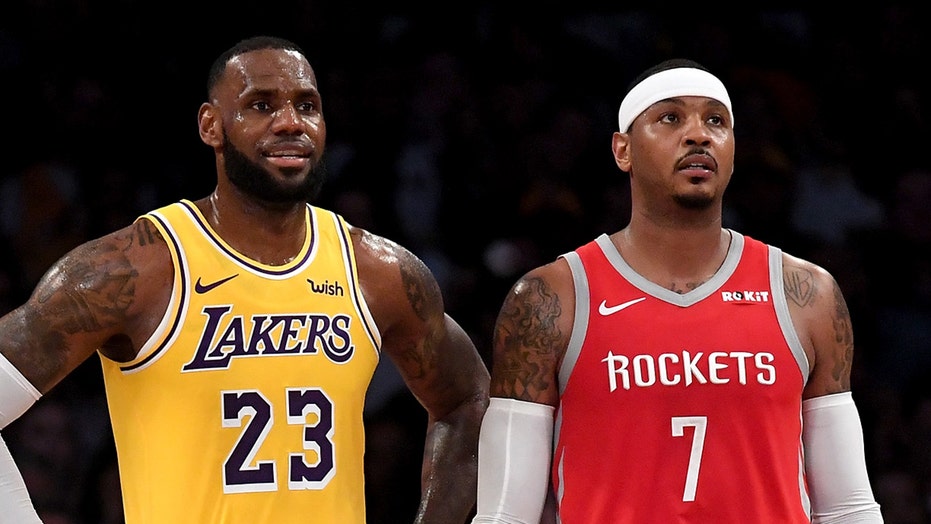 Carmelo Anthony was the second-most-talked-about prospect in the 2003 NBA Draft after winning a national championship during his only season at Syracuse.

And even though Los Angeles Lakers star LeBron James was the face of that draft -- and eventually of the NBA -- Anthony claimed that he was chosen by Michael Jordan over James to represent the Jordan Brand.

NETS STAR KYRIE IRVING READY TO GET BACK TO 'DESTROYING' NBA

Anthony talked on “Uninterrupted” about how everything went down.

“People don’t know my first year I was signed to Nike. Right? I didn’t have a signature shoe because the brand at that point in time I was the first signature athlete,” Anthony said. “I remember there wasn’t a plan at that point in time. But LeBron was at Nike, and MJ stepped up and said, ‘Look, I’ll pay half, Nike pay half. Look, I’ll take Melo, y’all got LeBron, Converse got D-Wade and Bosh.’ My first sneaker I ever played in with Jordan was a 16.5 or some s--t like that. And I remember … in preseason, the sneaker came off … I’m not playing in another retro again.”

Air Jordans -- which are obviously owned by Nike -- are the signature basketball sneakers for the former Bulls legend. After his playing days came to an end, he added NBA stars like Anthony, Chris Paul, Russell Westbrook, and now Luka Doncic to his team. James, on the other hand, joined Nike, and he has delivered 17 different models of the “LeBron” shoe, which is one of the most popular shoes in all of basketball.

Anthony, a 10-time NBA All-Star who was drafted No. 3 overall in the 2003 draft, spent his first seven seasons in the league with the Denver Nuggets. During his eighth year with the team, he was traded in-season to the New York Knicks, where he played for six-and-a-half years. Most recently, Anthony joined the Oklahoma City Thunder for one season, and then spent time with the Houston Rockets for 10 games in 2018-19 before joining the Portland Trail Blazers this season.

For his career, Anthony has an average of 23.6 points and 6.5 rebounds per game.