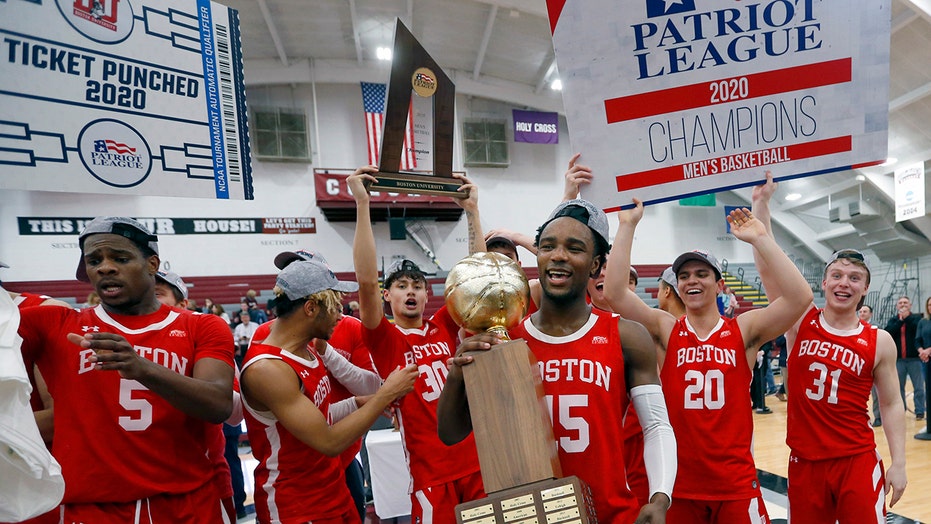 Walter Whyte was still in a daze.

“I can’t even put it into words. Unbelievable,” Whyte said Wednesday night after Boston University had upset Colgate 64-61 to win its first Patriot League Tournament. “We faced so much adversity. There’s been some dark moments.”

Not on this night.

Tournament MVP Max Mahoney had 18 points and 10 rebounds to lead four players in double figures as the Terriers shocked the regular-season champion Raiders to earn an automatic bid into the NCAA Tournament.

“I’m really fortunate to be in this position, really, because I have great kids ... that really would do anything that we asked them to do,” BU coach Joe Jones said. "It’s all about them. They put us in this position. I’m just here for the ride.”

The third-seeded Terriers (21-13) lost both regular-season matchups to top-seeded Colgate (25-9), which was 15-1 at home entering the game, the lone loss to Lafayette. Colgate was going for its fourth overall and second consecutive NCAA Tournament berth.

“The fact that we didn’t win only changes the result of our journey,” said Colgate's Matt Langel, named coach of the year in the league for the third straight time. "It’s been an incredible journey that they’ve taken us on.

"The thing that makes this game so special and makes the experience so special is the unknown of your emotions. If we were out there celebrating, everybody would feel great. Instead, we have the opposite emotional experience. We’re all striving to be champions, but the beauty is the journey that you’re on and the heartache you feel, the disappointment, as well as the love and care and all of the great emotions that we’ve experienced over the course of the year.”

Fears of the coronavirus were nonexistent at Cotterell Court — capacity 1,675 — as a crowd of 1,724 jammed the tiny venue to cheer the hometown Raiders.

“Coach told us yesterday just to embrace it, it’s going to be loud, us against the world," Mahoney said. "We got the job done.”

Whyte and Jonas Harper each scored 12 points and Javante McCoy had 11 points and seven assists with no turnovers for the Terriers.

Jordan Burns had 21 points, Jack Ferguson had 17, and Rapolas Ivanauskas had 13 points and 11 rebounds for Colgate.

BU never trailed after jumping to an early 17-point lead in its 64-61 win at home over Bucknell in the semifinals. But the Terriers trailed for most of this one until early in the second half and held on at the end.

BU regained the lead for the first time since the opening minutes when Whyte hit a 3 from the right wing and Mahoney converted off the glass in the opening minute of the second half. Two free throws by Will Rayman put Colgate back on top 39-38 with 15:53 left.

After Whyte hit a 3 from the top of the key to knot the score at 45-all with 13:12 to go, Ferguson hit a pair of free throws after being fouled shooting a 3 to give Colgate the lead again.

Burns and Rayman each missed open 3s in the closing seconds.

“The difference in the game was at the 3-point line,” Langel said. "We got three phenomenal ones (looks) late. Any one of them go down it’s an even game on your home court. You feel like that gives you a great chance.

“Sometimes the game just comes down to one team making a shot and the other team not.”

Colgate had finished with double-digit 3-pointers in 18 games this season, but the Raiders had a season-low four makes in 22 shots from the arc Wednesday.

Colgate won both of the regular-season matchups, the last one on Feb. 10 when the Raiders shot 47.5% and made five more 3-pointers en route to a 16-point victory.

Colgate led 33-29 at halftime despite a 3-for-12 performance from the arc. The Raiders entered the game with 338 makes from 3, fourth nationally, averaging 10 a game but missed their first six tries from deep. After BU's Fletcher Tynen hit a runner, his only basket of the game, to tie the game at 10-all with 12:56 left, the Raiders scored seven straight points and led the rest of the half. Rayman started the spurt with a reverse layup, Ferguson hit a 3 from the left corner, and Burns followed with a driving reverse layup. Burns had 13 points to lead all scorers while Mahoney led the Terriers with 10. BU was 2 of 9 on free throws in the first half.

Ivanauskas became the 36th member of Colgate’s 1,000-point club. His 1,004 career points have all come during his two years with the team after transferring from Northwestern. His 558 points in 2018-19 marked the highest single-season total since Adonal Foyle finished with 682 points in 1996-97.

Colgate is now 18-1 when it holds opponents to 69 points or fewer.

Boston University: The Terriers are the first No. 3 seed to win the Patriot League Tournament and earned their first NCAA bid since 2011 when they won the America East Conference Tournament. The Terriers made it to the 2014 Patriot League title game but lost to American. The teams had met once before in the postseason, and it was last year. Colgate erased a 12-point second-half deficit and won 81-69 in the quarterfinals at Cotterell Court.

Colgate: The Raiders were regular-season champions and earned an automatic bid to the NIT.

“Being regular-season champions in our league we earned an opportunity to play in the NIT,” Langel said. "I’m going to respect and support any decisions that are made from our administration on up, but I would love for this group to have a chance to keep playing.” UP NEXT

Boston University: Terriers find out Sunday where they will play in the NCAA Tournament.

Colgate: Raiders will find out Sunday where they'll play in the NIT.