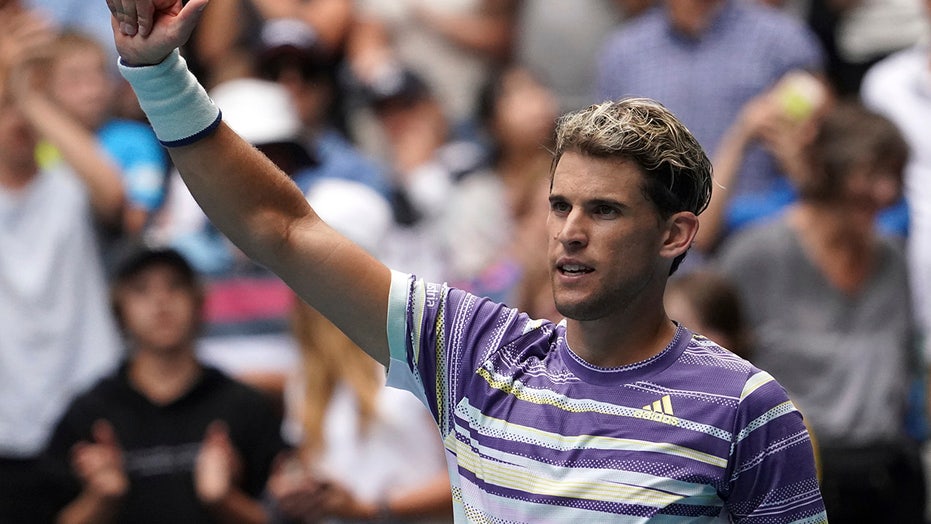 A red hue came over Day 4 at the Australian Open.

A bloody nose. And a two-time French Open finalist going five sets against a Bolt from Down Under on an indoor court at Melbourne Park after damp red dust delayed play on some outside courts following overnight rain.

Fourth-seeded Daniil Medvedev needed a medical timeout for a nose bleed before beating Spanish qualifier Pedro Martinez 7-5, 6-1, 6-3 on Thursday to reach the third round of the season's first major.

No. 5 Dominic Thiem, who excels on the red Roland Garros clay, handled a partisan crowd before breaking local wild-card entry Alex Boult's serve in the third game of the fifth set and advanced to the third round with a 6-2, 5-7, 6-7 (5), 6-1, 6-2 win.

No. 7 Alexander Zverev, who has pledged “every cent” of his prize money to the bush fire relief effort if he wins his first major title this year in Australia, advanced about the same time with a 7-6 (5), 6-4, 7-5 win over Egor Gerasimov.

Zverev, who won the ATP Finals two years ago, has pledged $10,000 for every match he wins at the very least. And that gives him top billing in the day session on center court.

A rain front that lashed Melbourne overnight crossed through a dust storm from the northwest along the way, leaving a red tinge across the city and turning the Yarra River a murky brown and causing yet another freakish weather disruption to the tournament.

Rain on three of the first four days has caused disruptions for players and organizers, little more than a week after smoke from bush fires caused air quality in Melbourne to be ranked among the worst in the world.

Medvedev, the U.S. Open finalist, was leading 5-0 in the second set when he called the trainer to help stem the blood from his nose. He said it happens to him sometimes, he wasn't bothered too much and confirmed it wasn't related to tension.

“No, no, not at all. If it would be, I would be bleeding every match I play," he said, smiling.

Medvedev said shifting from outdoor conditions to indoors helped him against Martinez.

“Yeah, of course it changes a lot, even like it was gray when we stepped on the court. We just played one game on the, let's say, outdoor court," he said. “As soon as the roof is closed, everything is different. It gets more hot, more humid inside. The ball goes faster."

Bencic said she was happy to get her match out of the way early.

“I didn't know the courts were, like, wet and dirty and all that,” Bencic said. “But for sure it was difficult today. It was sometimes sunny and then suddenly was almost raining. Then windy. Yeah, you just kind of have to accept it and go with it and try your best.”

Melbourne Park staff used high-pressure hoses to clean court surfaces. Light rain became heavy, forcing the suspension of play on outside courts until the sun came out in the mid-afternoon. Among the big winners was CiCi Bellis, the 20-year-old Californian who is ranked 600th following four surgeries on her arm.

Organizers were again forced to postpone matches because of the weather, rescheduling seven women's and six men's first-round doubles matches to Friday.

Bureau of Meteorology senior meteorologist Richard Carlyon told the Australian Broadcasting Corp. the brown rain was the result of the rain front moving through a dust storm northwest of Melbourne, and not from bushfire smoke.