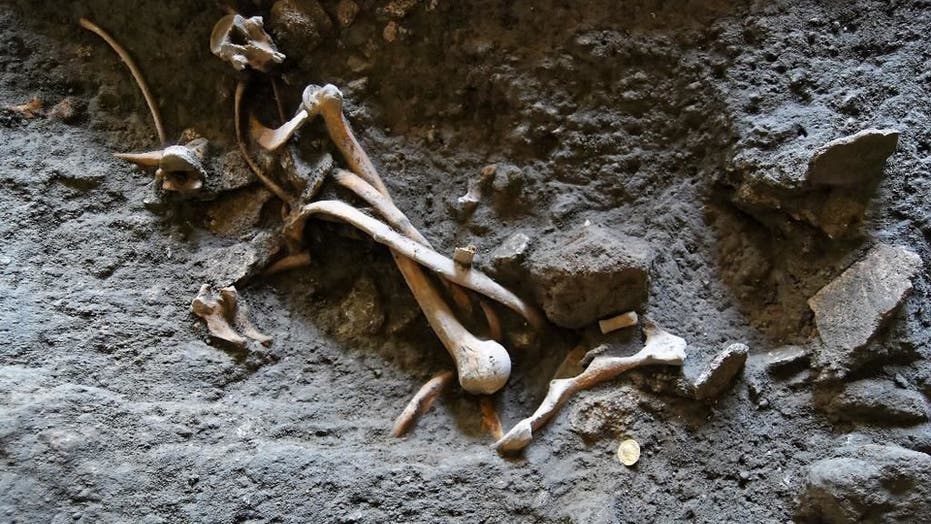 The Roman city of Pompeii was devastated following the eruption of Mount Vesuvius in 79 A.D., resulting in the deaths of approximately 2,000 people. A new study, however, suggests that some of the victims suffered a much more gruesome death than others.

The study, published in the scientific journal Antiquity, looked at victims found on a beach near Herculaneum and deduced that they died a rather tragic death, effectively "baking" from the heat and suffocating on the toxic fumes for a period of time.

The eruption of Mount Vesuvius destroys the Roman city of Pompeii in AD 79. (Photo by Hulton Archive/Getty Images)

"We think that all of the victims in the boathouses baked," one of the study's co-authors, Teesside University professor Tim Thompson, said in an email to Fox News. "We don’t actually believe the vaporization theory at all - even for the victims on the beach."

The researchers were able to come up with their conclusion by looking at the victims' collagen inside their bones and examing the heat-related changes inside the rib bones of 152 skeletons.

Heat affects the collagen in the bones and it alters their crystal structure, Thompson told LiveScience. By looking at the bones, they were able to determine the temperature, noting it was no hotter than 820 degrees Fahrenheit.

Thompson told Fox News it was not possible to tell if any of the victims suffered more than the others, as they only looked at small bone samples. He added that it's difficult to know how long the victims burned for, but those in the boathouses "most likely suffocated when the pyroclastic [ash] flow came down and covered the entrances to the structures."

Skeletons showing "life-like" stance: a child (A) (Ind. 41) and young adult male (B) (Ind. 22) unearthed from the ash surge deposit (chamber 10) (S1 Table). The child’s corpse displays flexure only of the upper limbs, indicative of an incipient “pugilistic attitude”. Full exhibit of this heat-induced stance is never found in the victims' corpses discovered at Herculaneum. (Credit: PLoS One)

A separate study published in 2018 suggested that when the volcano erupted, the explosion caused such extreme heat that victims' skulls exploded, their blood boiled and their muscles, flesh and brains were replaced with ash.

Since their discovery in the 16th century, the Pompeii ruins have given researchers great insight into what life was like before Mount Vesuvius erupted and wiped out the entire city in 79 A.D. Recently, there has been some dispute about whether the volcano erupted in August or October of that year.

Earlier this month, archaeologists discovered ancient brain matter that was turned into glass as a result of the volcanic eruption that devastated the city.

In April 2019, an ancient eatery known as a thermopolium (akin to a modern-day snack bar), where patrons could get drinks and hot food, was discovered among the city's ruins. Researchers have also found a fresco depicting a sensual scene involving the Roman god Jupiter and Leda and the remains of a petrified horse recently.

A "sorcerer's treasure trove" of items, including bones, skull charms and gems used for rituals was also recently discovered.