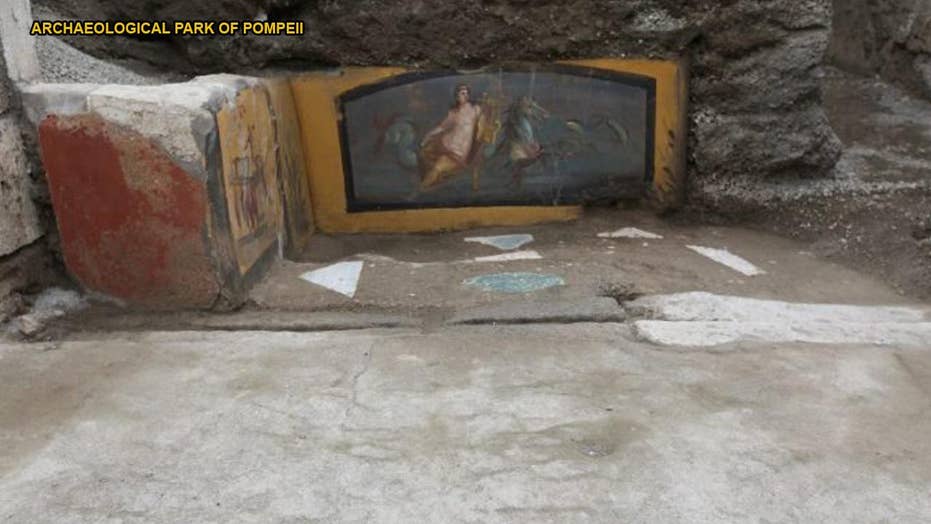 A new discovery in the ruins of Pompeii is giving experts another look into daily life in the city, before it succumbed to the devastating blast of Mount Vesuvius. Researchers have discovered an ancient eatery known as a thermopolium, which is akin to a modern-day snack bar. This thermopolium was adorned with a sign of a sea nymph, known as a nereid, which immediately caught the eye of archaeologists.

I'll have a massive volcano blast... and a side of fries?

Researchers have unearthed a new discovery at the ruins in Pompeii, an ancient eatery known as a thermopolium (akin to a modern-day snack bar), where patrons could get drinks and hot food.

"Thermopolia were places where, as the name of Greek origin would suggest, drinks and hot foods were served, and these goods were stored in largedolia (jars) which were embedded in the masonry serving counter," a statement detailing the discovery said. "Such establishments were located all over the Roman world, when it was common to go out to eat the prandium (meal). At Pompeii alone, there are around [80] of them."

Alfonsina Russo, the interim director at the Archaeological Park of Pompeii, said that the discovery gives another look into daily life in the city, before it succumbed to the devastating blast of Mount Vesuvius.

“Even if structures like these are well known at Pompeii, discovering more of them, along with objects which went hand in hand with commercial and thus daily life, continue to transmit powerful emotions that transport us to those tragic moments of the eruption, which nonetheless left us unique insights into Roman civilization," Russo said in the statement.

Although researchers have found the remains of 80 thermopoliums, this one was adorned with a sign of a sea nymph, known as a nereid, which LiveScience reports immediately caught the eye of archaeologists.

The researchers also found a number of other items in the excavation, including clay jugs. The excavation is part of the Great Pompeii Project, which was launched in 2012 to become a showcase of the once great city before Vesuvius' explosion.

Discovery of the thermopolium follows several other extraordinary finds made in Pompeii. In October 2018, researchers found a charcoal inscription on a wall that suggested that the eruption occurred in October of 79 A.D., two months later than previously thought.

A remarkable fresco depicting a sensual scene involving the Roman god Jupiter and Leda, a legendary queen of Sparta from Greek mythology, was also recently found.

Other recent finds include skeletons of people who were killed by the volcano, as well as a petrified horse found near a stable.

The Roman city of Pompeii was devastated following the eruption of Mount Vesuvius in 79 A.D. Pompeii was quickly buried by volcanic ash, killing about 2,000 of the city’s residents.