The United Nations offered what it called "bleak" findings Tuesday as it warned that the world was headed toward global "extinction" and would need to increase its efforts "fivefold" if nations wanted to reach the temperature reduction goal outlined in the Paris climate agreement.

According to the report, global temperatures are set to rise by 3.2 degrees Celsius by the end of the century -- a significantly higher target than Paris' 1.5 degrees. In order to bridge the gap, the U.N. called for a 7.6 percent per year reduction in emissions between 2020 and 2030.

"Failure to heed these warnings and take drastic action to reverse emissions means we will continue to witness deadly and catastrophic heatwaves, storms and pollution," UN Secretary-General António Guterres warned in a press release.

The U.N. warned that the expected temperature increase would translate into "mass extinctions. Large parts of the planet would be uninhabitable." 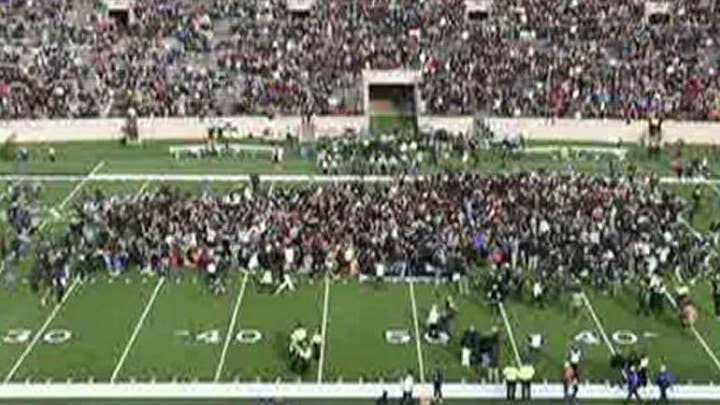 The report came as the debate around climate change began to intensify and the United States officially filed paperwork to remove itself from the 2015 Paris agreement. Progressives, like Rep. Alexandria Ocasio-Cortez, D-N.Y., have called for sweeping reforms, arguing that the cost of inaction outweighs the cost of transforming the economy.

Conservatives, meanwhile, have warned about economic consequences and pointed to failed, historical climate predictions as reasons for avoiding drastic change.

While cost estimates for climate plans have varied considerably, the U.N. called for the U.S. to spend between $1.6 trillion and $3.8 trillion annually on energy investments for the next 30 years. That would mean spending as much as $114 trillion by 2050. The report proposed action on "rapid decarbonization of the energy system," expanding renewable energy, and avoiding future emissions.

"Any transition at this scale is likely to be extremely challenging and will meet a number of economic, political and technical barriers and challenges," the report acknowledges.

The report will likely fall on deaf ears in the White House, which has already indicated it's not willing to risk the economic costs of reform. Democrats in Congress have already pushed bills geared toward reducing emissions but D.C. gridlock has made passage unlikely.

In the U.S., the Green New Deal, which aims to achieve Paris' temperature reduction goal, has become a model for leading progressive politicians to pursue in order to address climate change.

The right-leaning Heritage Foundation tried using a government model for predicting the economic cost of reaching Ocasio-Cortez's emissions goal through carbon taxes. It crashed and showed that just a 58 percent reduction would, by 2040, cost the economy $15 trillion in lost gross domestic product and an average of 1.1 million jobs per year. The average family of four would also see a total income loss of $165,000, or nearly $8,000 each year.

The U.N., like U.S. progressives, argued the economic benefits of energy transformation would be enormous.

"Analysis by the Global Commission on the Economy and Climate estimates that ambitious climate action could generate $26 trillion in economic benefits between now and 2030 and create 65 million jobs by 2030, while avoiding 700,000 premature deaths from air pollution," the report claimed.