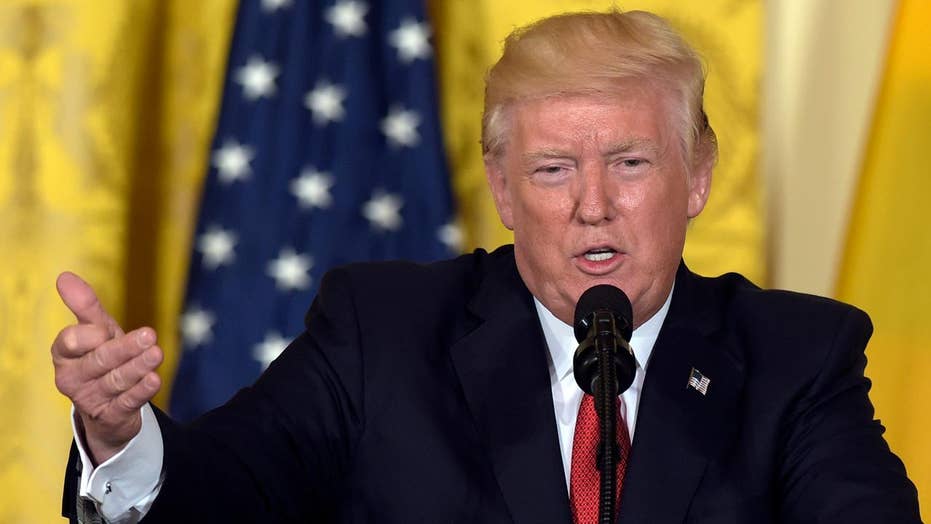 The United States is one of 195 nations who have signed on to the Paris Climate agreement. What is the accord and will President Trump keep or cancel the U.S.’s pledge?

President Donald Trump announced on Thursday that the United States will withdraw from the Paris Climate Agreement.

Below is a look at the accord and what a withdrawal would mean.

What is the Paris Climate Agreement?

Nearly 200 nations, including the United States under President Barack Obama's administration, agreed in 2015 to voluntarily reduce their greenhouse gas emissions in an effort to combat climate change.

The countries each set their own emissions targets, though these goals are not legally binding.

A priority "is to strengthen the global response to the threat of climate change keeping a global temperature rise this century well below 2 degrees Celsius above pre-industrial levels and to pursue efforts to limit the temperature increase even further to 1.5 degrees Celsius," according to the United Nations Framework Convention on Climate Change (UNFCCC).

Developed nations are also supposed to offer financial aid to developing ones so they can move toward cleaner energy sources, NBC News reported.

What did the United States pledge?

The U.S. pledged to lower its annual greenhouse gas emissions in 2025 by 26 to 28 percent below 2005 levels, which would be a reduction of about 1.6 billion tons of annual emissions.

The U.S. is the world's second-largest emitter of carbon, while China takes the top spot.  Beijing, however, has reaffirmed its commitment to meeting its targets under the Paris accord, recently canceling construction of about 100 coal-fired power plants and investing billions in massive wind and solar projects.

The Obama administration pledged as much as $3 billion to less wealthy nations by 2020, with the U.S. giving $1 billion, the New York Times reported on Wednesday.

Who hasn't signed the accord?

Nicaragua and Syria. They are the two holdouts in the United Nations Framework Convention on Climate Change, which includes a total of 197 countries, Reuters reported.

What has been Trump's stance?

Trump claimed before taking office that climate change was a "hoax" created by the Chinese to hurt the U.S. economy. The assertion stands in defiance of broad scientific consensus.

During his overseas trip in May, European leaders pressed Trump to keep the U.S. in the landmark agreement. While at the G-7 Summit in Taormina, Italy, Trump declined to join fellow G-7 members Canada, France, Germany, Italy, Japan and the United Kingdom in their pledge to uphold it.

PARIS CLIMATE AGREEMENT: TRUMP EXPECTED TO PULL OUT OF PACT

How will a withdrawal happen?

Who supported leaving the deal?

"It's a bad deal for America," Pruitt told Fox and Friends in April.

Jared Kushner, the president's senior adviser and son-in-law, generally thinks the climate deal is bad, according to the AP, but would like to find a way to see if the U.S. emissions targets can be changed.

Senate Majority Leader Mitch McConnell, R-Ky., and 21 other Republican senators sent Trump a letter last week urging him to follow through on his campaign pledge to pull out of the climate accord.

Most of the senators who signed are from states that depend on the continued burning of coal, oil and gas.

"We applaud you for your ongoing efforts to reduce overregulation in America," the letter was quoted by the New York Times as saying.

Twelve House Republicans have also signed a letter which encouraged leaving the deal, according to the newspaper.

What has the response been to withdrawal from the U.S.?

Trump is "choosing to put American jobs and American consumers first" with his announcement that the U.S. will withdraw, Vice President Mike Pence said Thursday.

He praised Trump's leadership and said Trump is "is choosing to put the forgotten men and women of America first." Abandoning the pact was one of Trump's principal campaign pledges.

"Even in the absence of American leadership; even as this Administration joins a small handful of nations that reject the future; I'm confident that our states, cities, and businesses will step up and do even more to lead the way, and help protect for future generations the one planet we've got," Obama said in a statement on Thursday.

Five Nordic countries had written Trump a last-minute letter which urged him to "make the right decision" and keep America signed onto the Paris climate accord.

The leaders of Denmark, Finland, Iceland, Norway and Sweden said the 2015 Paris Agreement to reduce global warming was a commitment "to our children."

Before Trump's announcement, House Democratic leader, Rep. Nancy Pelosi of California, on Wednesday called the president's expected decision "a stunning abdication of American leadership and a grave threat to our planet's future."

The agreement "honors our collective moral responsibility to leave future generations with a planet that is clean, healthy and sustainable," she said.