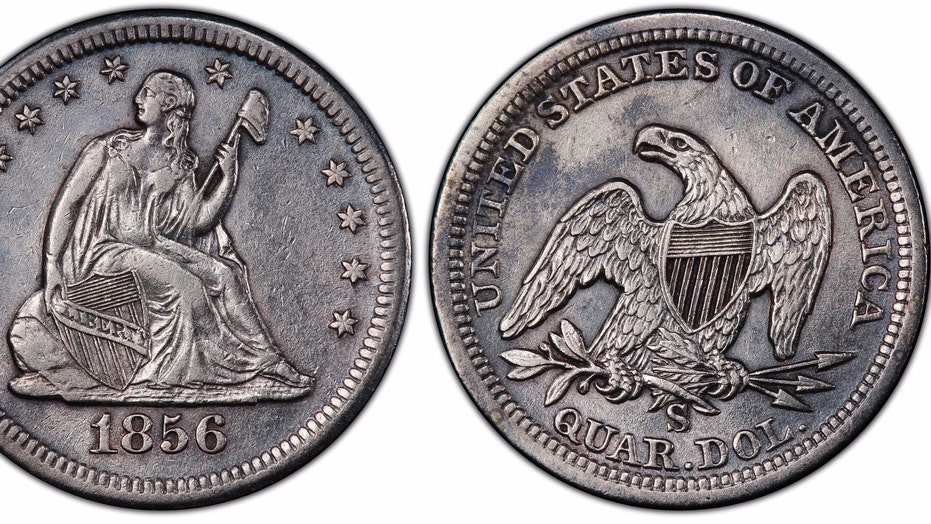 Nine rare silver quarters recovered from the wreck of a steamship that sank carrying treasure from the California Gold Rush are set for auction.

The quarters, minted in San Francisco in 1856, have a large “S” mint mark over a small “S.” They were recovered in 2014 from the wreck of the SS Central America, which sank in a hurricane off the coast of North Carolina on Sept. 12, 1857.

Dubbed “the ship of gold,” the SS Central America was carrying tons of Gold Rush treasure when she sank.

The coins were being transported from San Francisco to New York, via Panama, when the Central America sank. “These apparently came from a batch of coins brought aboard by a California Gold Rush-era miner and ended up in the ship’s safe along with the miners’ pokes (packets containing gold and/or coins),” said their owner Dwight Manley, managing partner of the California Gold Marketing Group, in a statement.

The rare quarters were recovered from the wreck of a steamship that sank carrying treasure from the California Gold Rush. (Image courtesy of Professional Coin Grading Service www.PCGS.com)

Such was the impact of the “the ship of gold’s” sinking that her loss contributed to the 1857 financial panic that gripped the U.S., according to the California Gold Marketing Group.

“Silver coins that were found in the purser’s bag in a lock box inside the ship’s safe survived 157 years in the Atlantic Ocean without the corrosion seen on most silver coins found on shipwrecks,” said Bob Evans, chief scientist on the 2014 recovery effort, in a statement. “This is undoubtedly due to the oxygen-starved (anaerobic) conditions within the safe. It was not water tight, but it essentially sealed off the interior environment and its chemistry from the outside seabed environment.”

A close up of the the large S over small s mint mark on one of the nine coins. (Image courtesy of Professional Coin Grading Service www.PCGS.com)

Evans was also chief scientist on the mission that first located some of the ship’s sunken treasure in the 1980s.

Rare coins are big business. An extremely rare half-dollar coin from 1838, for example, recently sold at auction for $504,000.

An 1894 dime, one of only 24 minted and once owned by former Lakers owner Jerry Buss, recently sold at auction for $1.32 million, including the buyer’s commission.