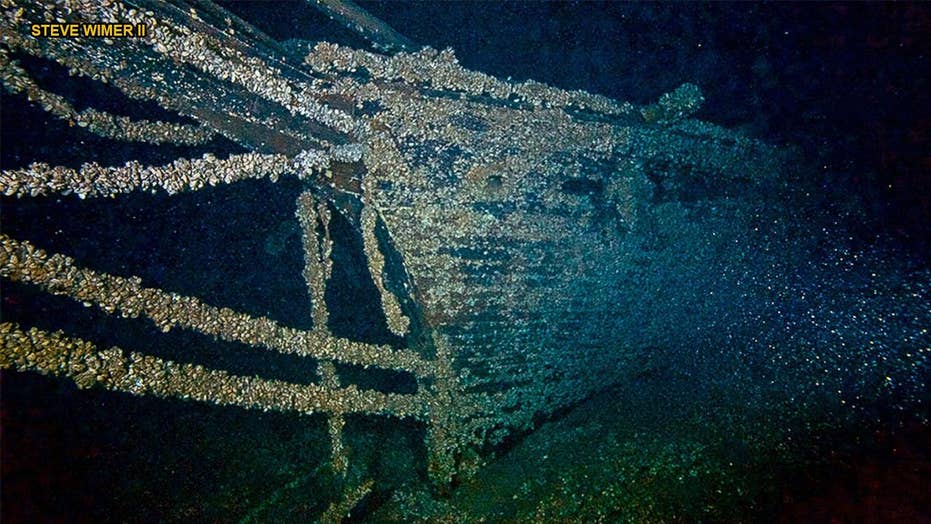 The wreck of a 'mysterious ghost ship' has been discovered in Lake Michigan. Researchers believe the ship is likely the W.C. Kimball, a cargo schooner that sank in 1891.

The remarkably intact wreck of a schooner that sank in 1891 has been discovered in Lake Michigan.

Shipwreck hunter Ross Richardson was traveling to South Manitou Island in northern Lake Michigan when his sonar picked up “something interesting” on the lakebed. Richardson made a record of the GPS coordinates and returned about a week later for a closer inspection. “The sonar showed something rising 90 feet off the bottom, which is very unusual,” he said on his website.

Resting in 300 feet of water, the mysterious object was beyond Richardson’s diving range so he called in his friend Steve Wimer, a diver and underwater photographer, to examine the wreck site. On Sept. 30, Richardson, Wimer and their friend Brent Tompkins returned to the site and Wimer swam down to photograph what the website describes as a “mysterious ghost ship.”

Wimer described what he found on the lakebed as “the most intact shipwreck I have ever encountered,” according to Richardson’s website.

The ship's "clipper bow" provided a vital clue as to its identity, (Steve Wimer II)

The wreck was a small two-masted schooner, about 60 or 70 feet in length, with a lifeboat at its stern.

Eerie footage of the wreck posted on YouTube shows the ship in its final resting place, with its masts clearly still intact. The ship’s deck, hull and stern cabin can also be seen, as well as its lifeboat.

The presence of iron rope offered a vital clue as to the ship’s identity, as was the schooner’s “sleek clipper bow.” Iron rope wasn’t widely used until the 1870s and the bow was typical of schooners built in Manitowoc and, later, Milwaukee, according to Richardson’s website.

After searching through about 6,000 schooner records in the Patrick Labadie Great Lakes Maritime Collection, and cross-referencing with Great Lakes databases and newspaper archives, the researcher said that the ship is likely the W.C. Kimball. The schooner was carrying a cargo of salt and wood shingles when she disappeared in May 1891.

MLive reports that the schooner, which was built in Manitowoc, Wis., in 1888, was lost in a gale with four people aboard.

The Great Lakes continue to reveal their shipwreck secrets. Two Civil War-era schooners that collided and sank more than 140 years ago were recently discovered near Beaver Island in northern Lake Michigan.

The wreck of a steamer has also been discovered 103 years after it was struck by a massive wave and sank in Lake Superior. Earlier this year, the Great Lakes Shipwreck Museum announced the discovery of the wreck of the S.R. Kirby off the Keweenaw Peninsula on Michigan’s Upper Peninsula.

Researchers found what appeared to be wreckage near Eagle Harbor, Mich., in 2018 and returned to identify the wreck with an underwater drone this year. That same year, experts said that a shipwreck discovered in Lake Erie in 2015 may be the oldest found in the famous lake.

A lifeboat was found near the wreck's stern. (Steve Wimer II)

Also in 2018, researchers announced the discovery of the 119-year-old shipwreck Margaret Olwill at the bottom of Lake Erie. The wooden steam barge sank during an 1899 nor’easter.

In May 2008, two explorers discovered the British warship HMS Ontario, which was lost in Lake Ontario in 1780. The Ontario is the oldest shipwreck ever found in the Great Lakes and the only British warship of this period still in existence in the world.

In 2016, Kennard was also part of a team of underwater explorers that discovered the second-oldest confirmed shipwreck in the Great Lakes. The Washington, an American-built, Canadian-owned sloop sank in Lake Ontario during a fierce storm in 1803.