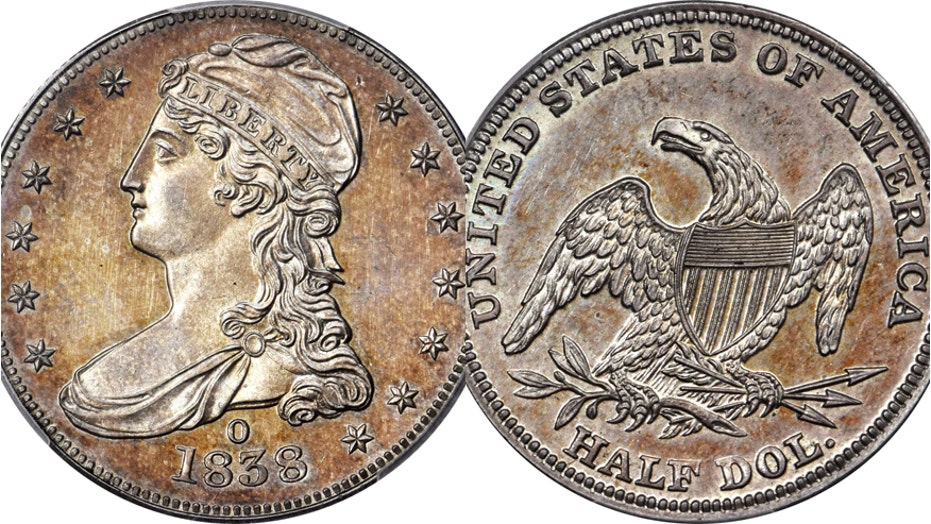 The coin was auctioned Friday at the Whitman Baltimore Winter Expo at the Baltimore Convention Center.

The 1838-O Capped Bust half dollar is one of only nine that are known to exist, according to auction house Stack’s Bowers Galleries. No more than 20 coins were made of the first issue of half dollars from the then newly opened New Orleans Mint, it said, in a statement emailed to Fox News.

“This particular mint was established to produce coins of several different denominations at the time but its main focus was the 50-cent piece, which was needed to convert the flow of uneven quality Latin American silver coins into a sufficient quantity of new United States coins fit for banking and commerce,” explained Stack’s Bowers Galleries.

The 1838-O Capped Bust Half Dollar is one of only nine that are known to exist. (Stack's Bowers Galleries)

The gallery continued: “However, technical issues and the spread of yellow fever in the area limited production of the coin for that year and very few were struck as a result. Now, the 1838-O half dollar is one of the most sought-after coins by collectors and enthusiasts alike due to its rarity and this particular specimen is one of the finest examples available.”

The back of the 1838-O Capped Bust Half Dollar coin. (Stack's Bowers Galleries)

The rare half dollar has been off the market since the 1980s.

Rare coins are big business. An extremely rare 1894 dime, one of only 24 minted and once owned by former Lakers owner Jerry Buss, recently sold at auction for $1.32 million, including the buyer’s commission.