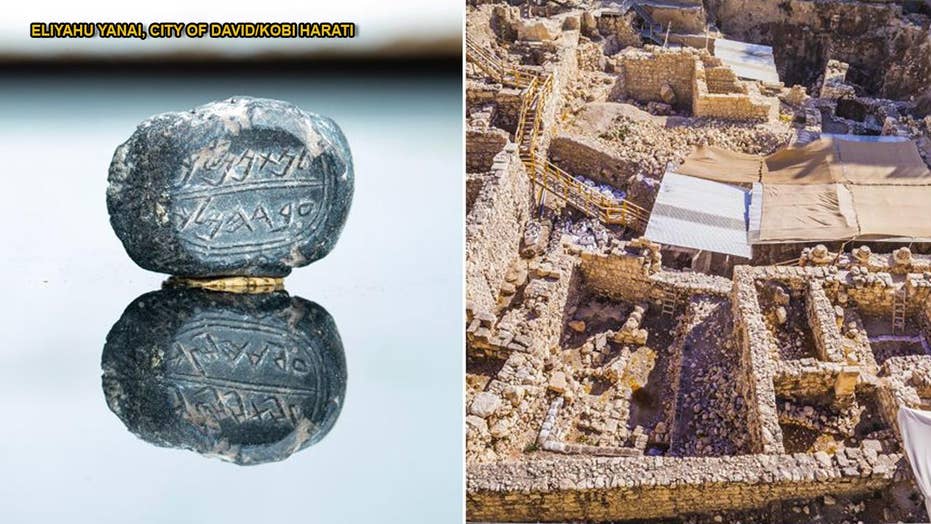 Archaeologists in Israel have discovered ancient treasures, a rare clay seal mark and a 2,600-year-old stone stamp, in the remains of a structure likely destroyed by ancient Babylonians. The seal and stone stamp both feature ancient Hebrew script, including the first archaeological evidence of the Biblical name Nathan-Melech. The seal mark and stamp likely survived a major fire as evidenced by the presence of charred pottery shards nearby.

Archaeologists in Israel have discovered a rare clay seal mark and a 2,600-year-old stone stamp bearing Biblical names amid the ruins of a building destroyed by the ancient Babylonians.

The amazing finds, which date to the First Temple period, were made in Jerusalem’s famous City of David. The artifacts were discovered in the remains of a structure razed in the 6th century B.C., likely during the Babylonian destruction of Jerusalem in 586 B.C., according to experts.

In a statement, Prof. Yuval Gadot of Tel Aviv University and the Israel Antiquities Authority, which oversaw the dig, said charred pottery shards were found in the building, indicating that the seal mark and stamp survived a major fire. Both artifacts feature ancient Hebrew script.

In ancient times, a seal stamp, or bulla, was used to authenticate documents or items.

The tiny 1 cm seal stamp has been dated to sometime from the middle of the seventh century to the start of the sixth century B.C. Deciphered by Dr. Anat Mendel-Geberovich of the Hebrew University of Jerusalem and the Center for the Study of Ancient Jerusalem, the stamp features the words: “(Belonging) to Nathan-Melech, Servant of the King.” In the second book of Kings 23:11 “Nathan-Melech” is described as an official in the court of King Josiah. The seal is described as the first archaeological evidence of the Biblical name.

“Although it is not possible to determine with complete certainty that the Nathan-Melech who is mentioned in the Bible was in fact the owner of the stamp, it is impossible to ignore some of the details that link them together,” said Mendel-Geberovich, in the statement.

1,600-YEAR-OLD ESTATE THAT BELONGED TO A WEALTHY ANCIENT SAMARITAN DISCOVERED IN ISRAEL

A 1 cm stamp-seal made of bluish agate stone was also found in the ruins. The stamp is engraved with the name: “(Belonging) to Ikar son of Matanyahu.” The name “Matanyahu” appears in the Bible and on other stamps and seal marks, but the name “Ikar” has not been seen before.

Mendel-Geberovich believes that “Ikar,” which can be translated as “farmer,” likely refers to a private individual, as opposed to a description of the person’s occupation.

Stamp seals, which were often used to sign documents, where often set in their owners’ signet rings. It is unclear who “Ikar” was.

“These artifacts attest to the highly developed system of administration in the Kingdom of Judah and add considerable information to our understanding of the economic status of Jerusalem and its administrative system during the First Temple period, as well as personal information about the king’s closest officials and administrators who lived and worked in the city,” said Prof. Gadot of Tel Aviv University and Dr. Yiftah Shalev of the Israel Antiquities Authority, in the statement.

“This is an extremely exciting find for billions of people worldwide, said Doron Spielman, vice president of the City of David Foundation which operates the City of David National Park, in a statement provided to Fox News, citing the importance of the seal. "The ongoing archeological excavations at the City of David continue to prove that ancient Jerusalem is no longer just a matter of faith, but also a matter of fact. It is truly fascinating to watch how archeologists have uncovered more than twelve layers of Jerusalem history in what used to be a parking lot until just few years ago.”

Israel continues to reveal fresh details of its incredible history. Archaeologists in the City of David, for example, recently discovered an unusual clay jar fragment depicting a ‘grotesque’ ancient deity for scaring away evil spirits. Experts also recently uncovered the estate of a wealthy ancient Samaritan at Zur Natan in central Israel.

In another project, researchers have been shedding new light on the history of a Biblical site linked to the Ark of the Covenant.

Givati Parking Lot Excavations in the City of David, where the discoveries were made. (Photo credit: Kobi Harati)

Other recent finds in recent years include the skeleton of a pregnant woman, dating back 3,200 years, in Israel’s Timna Valley, at a place once called King Solomon’s Mines.